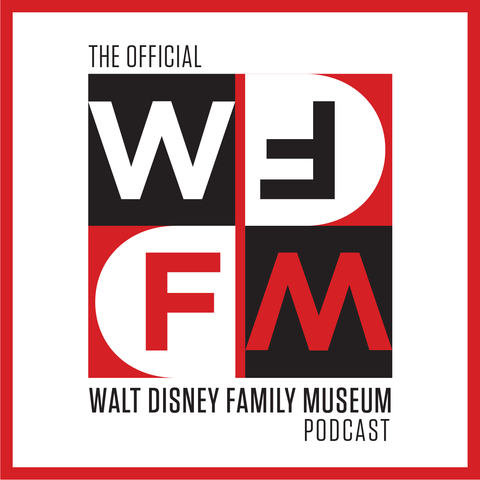 During the first week of the month, we will post our Museum Musings where we chat about our upcoming programs and news about The Walt Disney Family Museum. We will also be inviting employees of the museum to talk about their roles and what they are working on that furthers Walt Disney’s legacy.

During the last week of the month, we will post a longer-form Deep Dive into a film, project, or period of Walt’s life featuring exclusive audio from Walt Disney and those who worked with him.

As part of the podcast revamp, we will also be releasing each episode as a video podcast, with closed captions available on every video. Visit our YouTube channel @wdfmuseum or visit our website show notes posted to our blog for more content.

Join us for stories and conversations about the remarkable life and legacy of Walt Disney. Subscribe on Apple Podcast, Spotify, Stitcher, Google Play, and TuneIn.

Fantasia released in theaters on November 13, 1940. In celebration of its anniversary, Chris and Bri, co-hosts of WD-FM: The Official Walt Disney Family Museum Podcast, take a deep dive into the film's production, legacy, and groundbreaking techniques. Hear never before heard interview from Walt describing the process of interpreting music into animation.

Interview with the Women of Walt Disney Imagineering (Part 1)

Peggie Fariss began her 50-year career at Disney as an Attractions Hostess on the Storybook Land Canal Boats at Disneyland park. She was instrumental in the research for the EPCOT’s Spaceship Earth attraction and later became WDI’s liaison to corporate sponsors. Her experience representing WDI’s artistic vision led to her final assignment as a creative development executive for Disneyland Paris, where for five years she led a team that doubled in size from 25 to 50.

Kathy Rogers’ career began in the Disneyland parking lot. She became an Attractions Lead and then was tapped to work for WDI at Disneyland in 1983. Working first as a coordinator, she rose through the ranks to the producer level, retiring as Executive Show Producer with attractions as diverse as Muppet*Vision 3D and Expedition Everest to her credit.

Join Bri and Chris on the newest episode of WD-FM Museum Musings as they share upcoming museum programs and share some of their favorite Disney topics. In celebration of the premiere of Muppets Haunted Mansion on Disney+, join Muppet Performers Dave Goelz and Bill Barretta—the hands and voices behind The Great Gonzo and Pepe the King Prawn—in this special interview where they share behind-the-scenes moments from this spooky new special.

On this new episode of WD-FM, take a closer look at the fourth Disney feature film, The Reluctant Dragon. Chris and Bri discuss how the film was developed, its critical reception and box office performance, and some notable Easter eggs spotted in the film.

On this special episode of WD-FM, hear from Disneyland Guest Relations expert Sandi Baldwin about how she researched the distinctive costumes for the Disneyland VIP Tour Guides. On October 22, 2022, Baldwin presented an in-person program at the museum entitled, A Journey Through Time: Disneyland’s VIP Tour Guide Costumes, 1955–Present.

Interview with the Women of Walt Disney Imagineering (Part 2)

Elisabete (Eli) Minceff Erlandson wanted to study art, but her immigrant parents insisted she study anything else and encouraged medicine or engineering. She chose architecture, which had its own challenges as a male-dominated profession. For many years, she was the only woman at WDI who had an architectural license. She worked on 11 of the 12 Disney theme parks and has lived in Hong Kong and Paris. She is also an accomplished set designer and art director.

Tori Atencio McCullough is another Imagineer with deep Disney roots—her father, Disney Legend X Atencio, was a Disney artist and writer. McCullough spent her 40-year career at WDI in the interior design studio as both a designer and manager, and in those two roles has worked on every Disney theme park.

Welcome back to WD-FM: The Official Walt Disney Family Museum Podcast! Join Chris and Bri as they face off in our first ever Collections Clash. The first topic for this brand-new segment is Innovation. Can you guess what objects from the museum our hosts chose to best illustrate innovation?

For December's WD-FM Museum Musings episode, join Chris and Bri for a new Collections Clash with the theme of gifts. In Collections Clash, our hosts choose three objects featured in The Walt Disney Family Museum galleries in that episode's theme and face off. Head to our Instagram Story @wdfmuseum to vote for your favorite objects.

Join Bri and Chris on the newest episode of WD-FM Museum Musings as they share upcoming museum programs and share some of their favorite Disney topics.

For this month's WD-FM Museum Musings episode, join Chris and Bri for a new Collections Clash where they debate the best features of the museum's famous Disneyland model, "Disneyland of Walt's imagination." Head to our Instagram Story @wdfmuseum to vote for your favorite parts of the Disneyland model.

Back to Virtual Experiences