The Great Transportation Challenge Posed by This Mickey Statue

In February, The Walt Disney Family Museum closed the popular and beloved exhibition, Mickey Mouse: From Walt to the World. After its final close, the Collections and Exhibitions team began deinstalling the exhibition. When objects are slated for removal from an exhibition, they are carefully removed and either returned to their original storage location or sent back to their lender. With the unique Carousel Mickey—created by Henry De Vos circa 1930, two years after Mickey Mouse's debut in Steamboat Willie—there was more work needed to securely transport and store this unusual object.

Weighing approximately 225 pounds and standing close to five feet tall, this rare carousel figure was acquired for The Walt Disney Family Museum collection in 2014. When it came to the museum, it arrived in a crate that was built to adequately ship the object; however, the crate was not considered safe for its long-term storage and preservation. As the Mickey exhibition came to a close, our team worked closely with fine art crate makers, Steve Brindmore and Corey French from Case Fine Art Crating, Inc., a local San Francisco business, to design a new crate to adequately support the object for transportation and to provide a safe housing for long-term preservation.

Appropriate materials were chosen in order to prevent reactions between the materials used in the construction of the crate and the original materials used to construct the carousel figure. The specially-designed crate provides a removable tray that slides in and out of the crate allowing the object to be inserted or removed without having to physically touch it. Padded braces were inserted to support the object during transportation and space was included to accommodate a specifically-designed mount used during the exhibition.

Once in place and supported, Carousel Mickey was loaded into the crate with the help of Brindmore and French, closed, and safely moved to its designated storage location where it will stay stored in a controlled environment and monitored for its long-term preservation by The Walt Disney Family Museum Collections team. 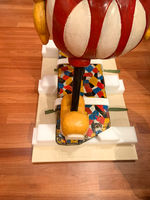 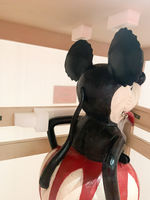 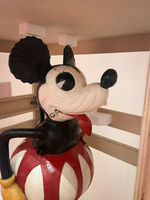 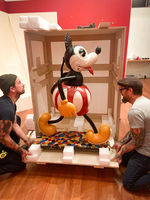