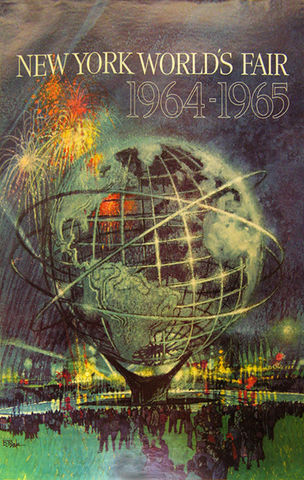 The 1964/65 New York World’s Fair represented a growth point for Walt in many different avenues of creative expression. Beyond being an opportunity to receive generous corporate sponsorships to develop new attraction technology, the Fair symbolized the pinnacle of Walt’s shared values of futurism and global cooperation. At the same time, the Fair also was a chance for Walt to scope out an unsuspecting East Coast market for the opportunity to host the next generation of Disney entertainment, combining all of these elements with the city-planning skills he honed during the development and maintenance of Disneyland.

The story of Walt’s father, Elias, is necessary to better understand Walt’s connection to the World’s Fair. Elias worked as a carpenter for the 1893 Columbian Exposition in Chicago, Illinois, a global spectacle that would set the precedent for future events of this kind, later referred to as “World’s Fairs.” This Exposition was significant because it was in celebration of the 400th anniversary of Christopher Columbus’ journey to the New World, and its marquee attraction was the first original Ferris wheel—an American response to the Eiffel Tower. Raymond (1890) and Roy O. Disney (1893) were born to Flora and Elias during this time.

Walt would later visit a World’s Fair in San Francisco, California in 1939, called the Golden Gate International Exposition. This event was in celebration of the completion of two monumental infrastructure projects: the San Francisco-Oakland Bay Bridge and the Golden Gate Bridge. Walt’s visit to this Exposition was important not only to his own personal life but the future direction of The Walt Disney Company. It was here that Walt discovered a love of miniatures through his enjoyment of just such an exhibit by Narcissa Thorne. As told in Gallery 7B, this inspired Walt to consider creating a traveling miniatures exhibit himself, which he called “Disneylandia.”Although that project never came to be, the name “Disneylandia” stuck with him, as did his interest to entertain people beyond the silver screen.

Over two decades later, Walt—by now a pioneer not only in the film industry but also television and themed entertainment thanks to the success of Disneyland—was approached about constructing attractions for the 1964/65 New York World’s Fair. Walt saw this as a two-fold opportunity: he could experiment with new ride technologies for implementation at Disneyland utilizing generous corporate sponsorships, and he could test the waters for a new entertainment venue on the East Coast (a gestating concept that would eventually be known within the company as “the Florida Project”). Walt agreed to create four attractions for the Fair: a boat ride sponsored by Pepsi on behalf of UNICEF called “it’s a small world”, a stage show sponsored by General Electric detailing the evolution of the American household through electric technological advancements called the Carousel of Progress, a car ride called Ford’s Magic Skyway for the Ford Motor Company that took guests in Ford cars through natural history dioramas, and a show for the state of Illinois in which its favorite son, President Abraham Lincoln, was immortalized as the most sophisticated Audio-Animatronics® figure of its time, in an attraction affectionately titled Great Moments With Mr. Lincoln.

“Meet me at the Tower of the Four Winds” was a popular refrain at the World’s Fair—a marketing slogan used to advertise “it’s a small world”, a boat ride through more than 100 countries with child-like Audio-Animatronics figures representing each distinct culture. The Tower of the Four Winds was a kinetic sculpture created by WED Imagineer Rolly Crump, and served as what Walt would deem a “weenie” to draw guests into the area. It related to the theme of the nearby attraction, as Walt touted, “The colors of every flag in the world will be represented somewhere on the mobile.” The attraction’s theme song, written by Richard and Robert Sherman, was intended to be “a prayer of peace” in the wake of the Cuban Missile Crisis. Rolly, Richard, and Robert were later named Disney Legends, in part for their contributions to the Fair. Other future Disney Legends assigned to the “small world” project included Mary Blair, one of Walt’s favorite artists, who designed the overall look and feel of the attraction, and Alice Davis, who designed costumes (as she would also do later with the Disneyland version of the Carousel of Progress). Each of the Walt Disney Parks and Resorts with a Fantasyland area has their own version of “it’s a small world.”

“There’s a great big beautiful tomorrow, shining at the end of every day.” This was the premise of General Electric’s Carousel of Progress that detailed the story of the American family as it has adapted to the forward march of electric-powered technology. For this attraction, WED Imagineers designed a “carousel theater” that allowed the audience to stay seated while they were moved clockwise around a stationary set of six stages approximately every four minutes. Signs advertised that 238 guests were cycled each rotation, resulting in over 40,000 daily riders! As they had done for “it’s a small world” as well as Ford’s Magic Skyway, Richard and Robert Sherman penned its catchy theme song.  With each of these attractions, Walt was deeply involved in the story. For the Carousel of Progress, Walt  watched the scene of "Uncle Charlie" sitting in a bathtub with a fan blowing over a cake of ice. Author Bob Thomas reported, "Walt himself climbed into the bathtub to devise the action. 'He shouldn't be reading a newspaper; it should be the "Police Gazette." There should be a glass of iced tea on the toilet seat there. And--let's see--his toes would be sticking up at the other end of the tub, and wiggling. Yeah, let's have his toes wiggling.’”

In Ford’s Magic Skyway, guests sat in the shells of Ford cars, propelled by a “WEDWay Transit System” through vignettes from the age of dinosaurs to the invention of the wheel, all narrated by Walt himself. WED Imagineers and Disney Legends Roger Broggie and Bob Gurr led the effort to create this pioneering ride system for the attraction—notable because it required no moving parts in the ride vehicle. The “WEDWay Transit System” would provide the basis for the PeopleMover attraction that opened at Disneyland following the World’s Fair and eventually would be ported over to Walt Disney World Resort’s Disneyland-style park—Magic Kingdom Park.

Great Moments with Mr. Lincoln, in the Illinois Pavilion, was a very personal project for Walt. President Lincoln was one of Walt’s childhood heroes. When he was a young boy, he performed the Gettysburg Address in a full Lincoln costume for his class, and was so well-received that he performed encores for the other classes as well. Long before the New York World’s Fair, Walt had the idea for a Disneyland “Hall of Presidents” attraction to be called One Nation Under God for Disneyland long before the New York World’s Fair. He had the Imagineers start with Abraham Lincoln. When Walt invited the head of the New York World’s Fair, Robert Moses, to tour the studio, he was so impressed by the One Nation Under God concept, he insisted on including it in the Fair. While Walt appreciated the gesture, he knew that he would not be able to complete the entire show within the given timeframe, and thus, a show involving solely Lincoln was born. During this new show, a seated Abraham Lincoln stands, gives a speech—made of excerpts of different Lincoln speeches—and sits back down, accompanied by a rendition of “Battle Hymn of the Republic.” For the attraction, Lincoln’s face was sculpted by Disney Legend Blaine Gibson using a life mask made in 1860 by the sculptor Leonard Volk. Another Disney Legend, James Algar, compiled the speech. 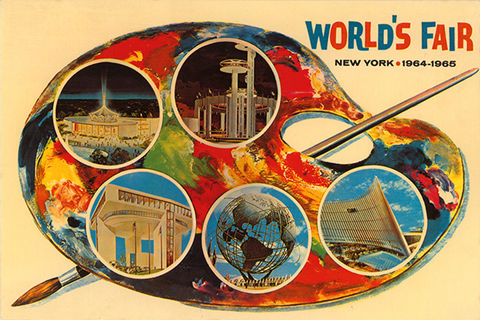 More than just the attractions themselves, Walt also gained the experience of developing technology for future Disneyland attractions. Before the New York World’s Fair, Walt’s foray into Audio-Animatronics was limited to birds and flowers—who allegedly could sing words and croon, respectively—in his wholly-owned Walt Disney’s Enchanted Tiki Room attraction. The utilization of so many Audio-Animatronics figures of varying sophistication for his World’s Fair projects was good practice for the Imagineers, in terms of the sheer quantity of figures in “it’s a small world,” and the quality of the eponymous Mr. Lincoln figure.

Walt also oversaw the development of brand-new ride vehicle technologies, which further enhanced the guest experience in telling the stories that Disney wanted told. As noted earlier, Ford’s Magic Skyway employed the “WEDWay Transit System,” a precursor to the system used for the PeopleMover at Disneyland. Throughout its run, Imagineers were able to isolate some deficiencies in the young PeopleMover system, such as lower ride capacity and the inability of vehicles to independently rotate. To address these concerns, they pioneered the Omnimover ride system, first for Adventure Thru Inner Space at Disneyland, and then most famously used in the Haunted Mansion series of Disney Parks’ attractions. The overwhelming success and popularity of the “it’s a small world” boat ride caused Walt to reassess his original idea for the mode of guest conveyance on his new Pirates of the Caribbean attraction. The headlining attraction of the soon-to-open New Orleans Square expansion of Disneyland was originally conceived as a walk-through wax museum, but upon observing the effectiveness of the water-based dark ride, Walt decided that Pirates of the Caribbean should become a boat ride as well.

Perhaps most important to the future expansion of Walt Disney Parks and Resorts into the global juggernaut that it is today, the popularity of Disney’s 1964/65 New York World’s Fair attractions was, in essence, a successful test of an East Coast market for Disney themed entertainment and set the stage for the development of a “Florida Project” (eventually referred to as “Disney World” by Walt, and then “Walt Disney World” by Roy to honor Walt following his passing). The idea of a permanent World’s Fair was itself taken as inspiration for the realization of Walt’s EPCOT project.

While, due to time and resources, Walt may not have completely gotten the attraction he wanted in Great Moments with Mr. Lincoln, Roy rectified this when he took on his brother’s “Disney World” project (after Walt’s death in 1966) in creating an attraction encompassing all of the Presidents. Dubbed The Hall of Presidents, it was included in the Opening Day plans for Magic Kingdom Park and remains in operation to this day. The Hall of Presidents would be joined over three years later by two more of its World’s Fair counterparts. Now known as Walt Disney’s Carousel of Progress, the attraction has been called “the longest-running stage show in the history of American theater.” The system that propeled World’s Fair guests along Ford’s Magic Skyway opened in Florida as the WEDway PeopleMover; it is known today as the Tomorrowland Transit Authority, providing guests with a bird’s-eye view and and a visit inside several of attractions.

The 1964/65 New York World’s Fair came to represent more than just new attractions for Walt and his team of Imagineers. For Walt, the Fair was an experiment of design and ambition, and the unparalleled success of both encouraged Walt to think bigger than ever before. The fruits of such efforts are apparent in the measures taken after his passing in preserving and continuing his vision with the opening of Walt Disney World. Through the story of the 1964-65 New York World’s Fair, it’s clear that Walt was interested in not only celebrating the potential of “a great big beautiful tomorrow, shining at the end of every day” but being an active participant in its realization.

Strodder, Chris, and Michelle Phillips. The Encyclopedia of Sixties Cool: A Celebration of the Grooviest People, Events, and Artifacts of the 1960’s. Santa Monica, CA: Santa Monica Press, 2007. p. 151.