Walt and Sharon Take a Trip to Alaska

“In August 1947, Dad accepted the invitation of a friend and neighbor, Russell Havenstrite, who owned a gold mine in a little town called Candle, to visit Alaska. Mother felt the trip might be too rugged for her, so Dad took eleven-year-old Sharon. It was an interesting and exciting trip for both of them.”

Walt Disney and his youngest daughter, Sharon, left Los Angeles on August 10, 1947 for a three week trip to Candle, Alaska. What was supposed to be a relaxing flight turned out to be quite an adventure…as well as a wonderful father-and-daughter bonding experience. In the summer of 1956, Diane and Sharon Disney sat down for an interview with Peter Martin, a feature writer of the Saturday Evening Post, where they recounted the events of that tumultuous trip to Candle, Alaska. 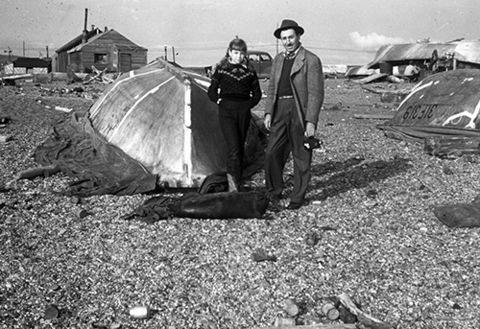 Diane begins the story, “The summer I went to camp, my father and my sister went to Alaska. They went up with Russell Havenstrite, who lives one house down from us. He has a private plane and has quite a few enterprises in Alaska. He has a gold mine and owns one little town in Alaska by the name of Candle. [Sharon and Dad] flew up over in this plane which is a DC3 Lincoln Bird. There was another couple along with them by the name of Anderson. In this one town they stayed in the airplane hangar and Daddy took care of my sister all the way. Sharon was a darling little girl with long hair and freckles—just an absolute doll. This was when she was Daddy’s buddy. She had long braids and he had to braid her hair. She would get plane sick and he would have to clean her up, put her to bed, wake her up, and wash out her clothes.

“They were in a little plane, a Bush plane. It was only supposed to be a forty-five-minute flight. They got up there and got in bad weather. They didn’t know where they were, they didn’t have any instruments, nothing to guide them just their vision. They didn’t have any visibility at all. They were up in the air for two hours and the gas was running out. Daddy didn’t know if they were going to come down or not. Dad and Mr. Havenstrite had just gotten word that [Mr. Havenstrite] was the grandfather of a grandson and so they were drinking to that but also drinking to the fact that they might never see any of their loved ones again.”

Sharon explains, “I was eleven and no one told me. I thought it was just because of Rusty being born.”

“So she sat there and she was combing Daddy’s hair,” Diane continues. “Here she was, and he was letting her comb his hair and she was doing all these little things with his hair—and she was completely oblivious that they might not see the earth again.”

“They took a chance and dove through the clouds,” Sharon remembers. “Luckily Candle was right below us.”

“When they got out of the plane they didn’t have one of those regular stair[cases] and they had a long ladder. Dad fell flat on his face. He could have kissed the ground,” adds Diane.

Sharon recalls, “There was a second floor on the airplane hangar, I slept on top of it. We each had our own room. We had to walk across the pontoon bridge across the river to use the regular bathroom, and it was in somebody’s home. It was really rugged. We were there five days and nights. Daddy took beautiful care of me—he really did.”