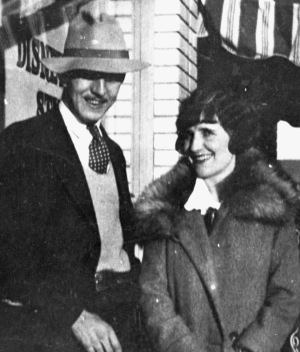 eum) has offered us this remembrance of a celebrated Disney romance.

The story of Walt’s early romance with Lillian Bounds is a favorite tale among biographers and historians. Many people are familiar with the tale of Walt driving Lilllian and the other Ink and Paint girl home when they would have to work late. Walt would drop off the other girl first, even though Lillian’s house was closer to the studio. As we discover, there is more to tell to this story.

In December 1923, Lillian Bounds arrived in Los Angeles from Lewiston, Idaho, where she had attended business college. She decided to move to Los Angeles to live with her older sister, Hazel.

The Alice series was just beginning and the Disney brothers brought Kathleen Dollard on board to help out. They asked Kathleen if she knew anyone else that could help and she mentioned “a stenographer who’s not doing anything at the moment.” Walt asked Kathleen to see if she would work for them.

Kathleen told Lillian, “I have a job for you, but I am telling you about it on one condition: don’t marry the boss.” (Diane Disney Miller recalls hearing the story somewhat differently, and with a far more evocative period vernacular: “I was told that Kathleen's admonition to mother was actually ‘Don't vamp the boss.’")

Lillian decided to apply for the job since it was within walking distance from her home. She went to the Kingswell Studio for the interview. She met Walt for the first time and remembered that he wasn’t wearing a suit but had “a brown coat, sweater, raincoat and pants.” She was offered the job for fifteen dollars a week. Lillian’s seven year-old niece, Marjorie Sewell, walked her to the studio so she wouldn’t get lost on her first day. 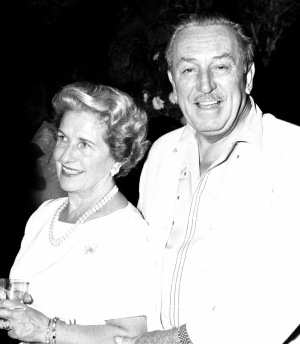 Walt would frequently offer to drive Lillian and Kathleen, the other ink-and-paint girl, to their homes in the studio’s Ford roundabout (also called a runner) during the early days of the Studio. As the story goes, Walt always dropped off Lillian last, even if her home was closer. The old Ford had one seat and an open back. Lillian took a small amount of pride that Walt wanted to spend more time with her.

Lillian was hired on January 19, 1924 in the Ink and Paint Department. Walt and Lilly would be married a year and a-half later on July 13, 1925 at her brother’s house in Idaho. During that time, Lillian worked her way from Ink-and-Paint Girl to Walt’s personal secretary. Bob Thomas’ biography of Roy Disney, Building a Company, offers a tantalizing quote on the subject of Lillian’s performance:

“I was not very artistic at all, and I was not very good at inking and painting,” Lilly admitted. “Later, Walt made me his secretary, but I made too many mistakes when he was dictating. He always said I was so bad that he had to marry me.”

Walt was unsure about meeting Lilly’s extended family because of his absence of proper clothes. One evening, he asked Lillian if he could visit her if he got a suit. After she agreed, Walt and Roy went to Foreman and Clark’s and bought suits. Roy spent $35.00 for a one-pant suit while Walt spent $40.00 for a suit with two pair of pants. When he visited Lillian, he arrived in a gray-green and double breasted suit and “he looked very handsome.” Obviously, Lillian’s family liked him without hesitation.

Diane Disney Miller recounts the story of her parents first kiss in the Story of Walt Disney.

Mother has never talked much to me about Father’s courting, but she did break down once and tell me of the first time he kissed her. It happened one night when they were working late and Mother was taking dictation. “Suddenly,” she said, your father leaned over and kissed me.”

“I blushed,” Mother said. “It was customary in those days.”

George Taylor is the master of www.imaginerding.com, a site that focuses on Disney books, links, and the science of: Theme Parkeology (theem pahrk\ŏl'ə-jē) = the study of details, minutiae and history of theme parks. Akin to the archaeological study of human habitation, theme parkeology looks at the often layered and detailed surroundings. Theme Parkeologists relentlessly pore over the tiniest scraps to glean any information about an area of a theme park, past or present.