Unusual Suspects: The Bathroom of Tomorrow

Unusual Suspects is a series that focuses on secondary or little known characters in Disney films. This month we here at STORYBOARD decided to go with an unusual Unusual Suspect, and talk about a little known attraction that Walt himself helped dedicate in Disneyland. When you want to visit a restroom with gold-plated fixtures, you wouldn’t visit the bathroom of yesterday, would you? Of course not! You would meander on over to Tomorrowland and gaze upon the Bathroom of Tomorrow.

As construction of Disneyland was in full swing, Walt Disney was faced with the harsh reality that serious cuts were going to have to be made. After being forced to scale back Fantasyland, it soon became evident that his ambitious plan for a lavish Tomorrowland was going to suffer a similar fate. Walt Disney believed in tomorrow, but tomorrow was expensive. In 1953, Walt had declared that Tomorrowland would be “the factual and scientific exposition of things to come.” In 1954, Walt decided that Disneyland would have to open without it.

In January of 1955, with less than six months to go before opening day, Walt changed his mind. 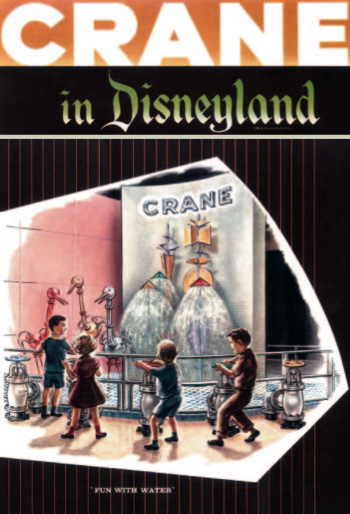 It was the right call. Walt knew that half a Tomorrowland was better than no Tomorrowland. With the budget stretched as far as it could go, a bare bones Tomorrowland opened with the rest of the park on July 17, 1955. Guests were able to visit the Circarama theater, ride miniature highways on the Autopia, stop by Monsanto’s Hall of Chemistry, and not much else. But it wasn’t long until attractions started to spring up, and previously closed buildings started to open their doors. Within a month of opening day, guests could board a Rocket to the Moon, explore the 20,000 Leagues Under the Sea Exhibit, and tool around the Tomorrowland lagoon in the odd but stylish Phantom Boats. And on April 5, 1956, they became privy to a relatively unusual exhibit known as the Bathroom of Tomorrow.

Sponsored and installed by Crane Plumbing Company, their handout brochure boasted, “This fabulous bathroom, actually designed for the future, is available for your home today!”

Located in the same building as the Hall of Chemistry and Hall of Aluminum, the Bathroom of Tomorrow (built only to be seen, not used) featured a wide array of modern conveniences. The fixtures, styled by celebrity industrial designer Henry Dreyfuss, were a vibrant citrus yellow (the ones that weren’t plated in 24-karat gold, that is). Because this was an unusual exhibit, it called for an unusual dedication. Instead of a formal ribbon cutting, Walt was joined by Dreyfuss and Crane Co. President Frank F. Elliot for a fun valve-turning ceremony. 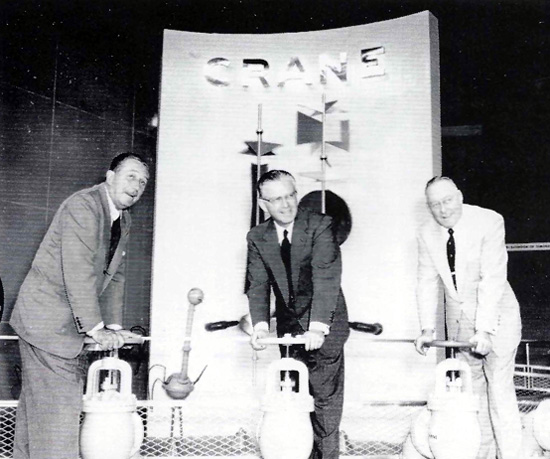 In addition to the fixtures, the display also featured ceramic figurines, a pair of sunglasses, a telephone, and even dumbbells—for folks who enjoyed exercising while soaking in the tub. The bathroom also featured state-of-the-art heating and air conditioning. “Tomorrow’s bathroom incorporates the type of heating and cooling which will make you forget the weather,” the handout brochure promised. The exhibit was also home to a Laundry of the Future, which according to Crane, “only hints at possible attractive settings for the home laundry with Crane material.” In addition to all of this, guests could enjoy “a dramatic story of valves” in a tear drop-shaped display, and kids could play with guest-activated faucets located at the exhibit’s entrance. The 20-foot showcase—along with its accompanying displays—actually gave visitors quite a few things to look at.

Walt knew this “attraction” wouldn’t be around forever, though. In August of 1960, the Bathroom of Tomorrow became the Bathroom of Yesterday as the exhibit was replaced by a Fun Foto location. It was a fun exhibit while it lasted, but in the end, Crane’s hopes of having a long-term presence in Tomorrowland went down the drain.