A Tiny Story About a Big Disney Influence

So Dear to My Heart will be screening throughout the entire month of September. As you may know, the film was an inspiration for Walt's hobby of miniature making and collecting. He built an elaborate miniature based upon the "Granny's Cabin" set of the film, and began a passionate pastime that ultimately led to the creation of Disneyland. Learn more about our huge collection of these tiny models below! 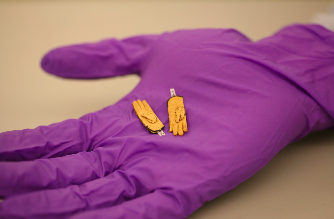 Mrs. Thorne designed the rooms with famed miniaturist Eugene J. Kupjack, and in collaboration with architects and cabinetmakers, who built historically accurate interiors of museums, European castles, historic homes, and churches. Her collection can still be seen today at The Art Institute of Chicago, where Walt himself revisited it in later years.

By 1947, with his imagination still completely captivated by these miniature worlds, Walt began actively collecting miniatures for his own personal collection. Everything from furniture to figurines, silverware to paintings, rugs to musical instruments, liquor bottles to books—even a tiny organ created by conductor Frederick Stark —began to fill his shelves.

In the early 1950s Walt developed an idea for a series of miniature dioramas, depicting historical Americana, with the idea of touring them throughout the country. He called the project Disneylandia, and initially consulted with Eugene J. Kupjack, the builder of Mrs. Thorne’s rooms.

“I am hoping [my new project] will become a reality, but at this point it’s very much in the thinking and planning stage. . . . I’ve been collecting all sorts of miniature pieces for the past three or four years, with this project in mind. It’s been a wonderful hobby for me and I find it is something very relaxing to turn to when studio problems become too hectic.” —WALT to Ruth, December 4, 1952

“Disney has collected miniature copies of antique furnishings from all over the country and built others in his studio workshops. He has set farmhouses among ‘crops’ of paper, cloth, wax and wood.” —Popular Science, February 1953

So Dear to My Heart screens daily through September at 1pm & 4pm (except Tuesdays, and September 17 and 24). It's a nostalgic family film about a boy named Jeremiah who grows up on his Grandmother's farm and trains his baby lamb, Danny, to compete in a county fair. Of the film, Walt said: “So Dear was especially close to me. Why, that’s the life my brother and I grew up with as kids out in Missouri.”  Will Jeremiah and Danny win a prize at the fair? Come to The Walt Disney Family Museum's screening of So Dear to My Heart to find who comes out a winner. Tickets are available at the Reception and Member Service Desk at our museum, or online at www.waltdisney.org.