This month, The Walt Disney Family Museum celebrates one of Walt Disney's most curious and beloved animated features, Dumbo. 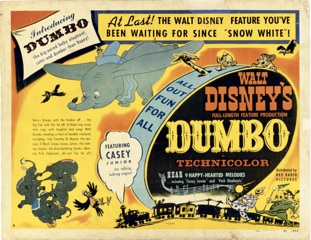 When Walt Disney’s Dumbo debuted in the late summer of 1941, it was greeted with a refreshing critical enthusiasm.

The show business paper Variety was typically clinical, saying “Walt Disney returns in Dumbo to the formula that accounted for his original success—simple animal characterization…There's a pleasant little story, plenty of pathos mixed with the large doses of humor, a number of appealing new animal characters, lots of good music, and the usual Disney skillfulness in technique.”

Bosley Crowther of The New York Times fairly gushed, calling Dumbo “the most genial, the most endearing, the most completely precious cartoon feature film ever to emerge from the magical brushes of Walt Disney's wonder-working artists…Never did we expect to fall in love with an elephant. But after meeting up with Dumbo at the Broadway Theatre last night we have thoroughly transferred our affections to this package of pachyderm.”

“Dumbo is the nicest, kindest Disney yet,” said Cecilia Ager in PM. “It has the most taste, beauty, compassion, skill, restraint. It marks a return to Disney first principles, the animal kingdom—that happy land where Disney workers turn into artists; where their imagination, playfulness, ingenuity, daring flourish freest; where, in short, they’re home.”

Time magazine observed, “[Walt Disney’s] fifth full-length cartoon movie, profiting from the shortcomings of its predecessors, is notable for its freedom from the puppeteering of Snow White, the savage satire ofPinocchio, the artiness of Fantasia, and the woolgathering of The Reluctant Dragon. Like Three Little Pigs, Dumbo is a catchy fable with a moral…Seldom has Disney articulated his characters so aptly…But the charm of Dumbo is that it again brings to life that almost human animal kingdom where Walter Elias Disney is king of them all.” 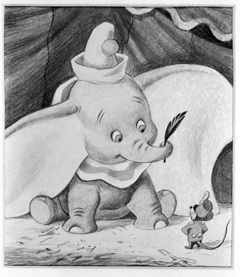 The public reaction made the critical reaction seem tepid. By the time the holidays approached, Dumbo (which had been completed at a final negative cost of $813,000) was well on its way to making $2.5 million. The picture touched a chord in audiences whose world was again teetering on the brink of World War, and they embraced the simple sentiment and inspiring story of the plucky pachyderm and his triumph over adversity.

Such was the popularity of Dumbo that Time magazine made plans to revisit the film and its hero in a year-end essay, and an unheard-of honor: Time would recognize little Dumbo in its December 29, 1941 issue with a cover portrait, touting him as “Mammal of the Year” (in reference to the annual Time tradition of selecting a “Man of the Year,” initiated in 1927, and still presented today, as “Person of the Year”).

The Disney Studio artists set to work, creating a cover portrait of their movie star for the revered weekly newsmagazine. A simple black and white pencil rendering was the first version, showing a pleasant, smiling Dumbo beside a circus tent, Magic Feather firmly grasped in his trunk, gazing down at his mentor and friend, Timothy Mouse.

This drawing was reportedly judged too pleasant, easily confused with an actual scene from the film rather than a Time cover portrait. 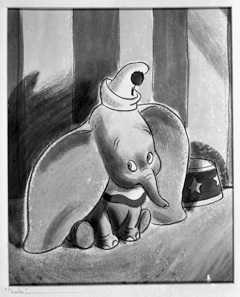 A second design was created, this one darker, using pencil and ink wash, with a less detailed circus background. Dumbo is alone, without a smile, and with his eyebrows raised in an expression of uneasiness or nervousness, as if he is being asked to sit still and pose. In this fashion, it is a portrait of Dumbo more commensurate with the formal cover portrait style of Time magazine of the period.

Plans for Dumbo’s cover debut moved ahead, but then in the early morning of Sunday, December 7, 1941, naval and air forces of Japan attacked Pearl Harbor and sent the United States hurtling into World War II. Priorities immediately changed, the news completely shifted focus, and suddenly the sweet idea of the lovable little elephant that had captured the hearts of moviegoers seemed to trivialize the cover of the nation’s most reliable newsmagazine.

The cover portrait of Dumbo was supplanted by a portrait of [General Douglas] “MacArthur of the Philippines” and the quotation “By God, it was Destiny that brought me here.”

Inside, however, in the “Cinema” section, readers found an unusually candid behind-the-scenes story and loving appreciation of Dumbo, still under the headline “Mammal of the Year,” but with a lead that had obviously been re-crafted to the context of the times:

“In beleaguered Europe, in blood-stained Russia, on the tank-tracked Libyan desert, above & below the earth's seas, Santa Claus was getting short shrift. Even in the U.S., his last, best hope on earth, Adolf Hitler and his hissing Japanese friends had tried to thwart him. But their attack came too late to destroy all the fruits of a U.S. Christmas. Now, more than ever, Americans were thankful for what they were about to receive. They were thankful, too, for Dumbo.”

Walt Disney's Dumbo is screening every day in May at 1:00pm and 4:00pm (except Tuesdays, and May 21 & 22) in the state-of-the-art digital theatre at The Walt Disney Family Museum. Tickets are available at the Reception and Member Service Desk at the Museum, or online at www.waltdisney.org.