“A Story Without End” Walt Disney and the American Revolution

In late May 1957, American television viewers gathered for another weekly installment of the Disneyland program. Entitled “The Liberty Story,” Walt Disney greeted viewers at a record player, played the song “The Liberty Tree,” and explained that “the liberties which we enjoy and take for granted didn’t just happen. They had to be won. … Behind our liberties there’s an interesting story…”

At the time, Disney was soon to release Johnny Tremain (1957), a live-action adventure starring Hal Stalmaster and directed by Robert Stevenson—later to helm Mary Poppins (1964). Based on the fiction novel by Esther Forbes, it told the story of a teenage Boston silversmith who becomes caught up in the American Revolution—meeting Paul Revere and Samuel Adams, among others, and participating in the Boston Tea Party and battles at Lexington and Concord.

“[My father] remembered and carefully noted every book that I ever read and enjoyed,” Diane explained to journalist Pete Martin around the time of Tremain’s production. “He bought several of them. Johnny Tremain is one… It’s a story of the Revolution and it’s just wonderful, about a young boy, very well-written for a children’s book… Daddy doesn’t think anything could be more exciting than American history.”

In “The Liberty Story,” Walt announced a new expansion for Disneyland Park: a byway off Main Street, U.S.A. called Liberty Street. “As you know, Disneyland Park is sort of a monument to the American way of life,” he explained. “But after reading Johnny Tremain, we realized we had overlooked one major item in the blueprint: a memorial to the freedoms that made it all possible. Well, we’re busy putting it in right here off the Town Square. We’re calling it Liberty Street. Everything’s in the planning stage of course, but our research has taken us back to a period we’d like to recreate as a reminder that the liberty story is a story without end.”

The proposed location—what Walt described as “Johnny Tremain’s Boston of about 1775”—was a recreation similar to Virginia’s Colonial Williamsburg, which Walt visited in the 1940s. But the expansion never opened at Disneyland. Not only did other developments assume priority, but a key element of Liberty Street, a special presentation within the “Hall of Presidents,” proved too complex to realize at the time. With the advent of Audio-Animatronics®, a modified version, Great Moments with Mr. Lincoln, opened at the New York World’s Fair in 1964, and The Hall of Presidents was finally created for Walt Disney World in 1971 at the Magic Kingdom’s Liberty Square, itself an evolved concept of Walt’s original plan. 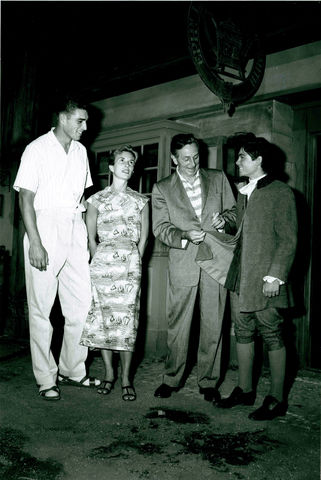 Among the ideas for Liberty Street, Walt planned to include a Liberty Tree, inspired by a real elm tree in the heart of Boston which became a gathering spot for patriots in the 1760s and 70s—Johnny Tremain and his fellow Bostonians sing “The Liberty Tree Song” in the film. Though the tree itself was cut down by British soldiers, it remained a symbol of the Revolution. Today, a large live oak bears the name at Liberty Square in the Magic Kingdom Park. (Coincidentally, a replica sculpture of the Liberty Tree was created for the New England Pavilion at the 1964 New York World’s Fair, with no connection to Walt’s projects).

Johnny Tremain was not the only Disney production inspired by early American history. The 1953 featurette-length cartoon Ben and Me was adapted from the children’s book by Robert Lawson, and told a fantastic history of the church mouse Amos, who became a confidant of Benjamin Franklin. As narrated by Amos—voiced by Sterling Holloway—the mouse was revealed to be “really responsible for the great deeds attributed to [Franklin],” and the film was nominated for an Academy Award®. Later in 1959, Leslie Nielsen starred in the television series The Swamp Fox, inspired by the true-life history of Francis Marion, a solider of the American Revolution who fought in South Carolina.

With the stories of the American Revolution, Walt recognized the value of history and its application to his own films and programs. As with much of his work, he demonstrated the keen ability to entertain his audience, yet also leave a spark of curiosity that led to inspiration and learning. Walt himself told Pete Martin, “I’ve always been interested in the past and history. And I think it’s vital. I think [in] the world we’re living in today… we can’t forget the things that happened, such as… the Founding Fathers and that darn Constitution which is such a vital thing to what we’re doing today.”

The Disneyland television episode “The Liberty Tree” is now available for streaming on Disney+.