January 9, 2013 marks what would be the 100th birthday of former President (and Vice President) Richard M. Nixon. We here at STORYBOARD felt what better way to celebrate than to talk about a fun incident that took place the day he helped dedicate the Monorail.

If you were to ask Disney Imagineering Legend Bob Gurr for his recollections of June 14, 1959, he wouldn’t start by telling you it was a warm, summer Sunday. He would refrain from leading off with the fact that he was wearing a uniform that had been created for him mere hours earlier. And he probably wouldn’t begin by saying how much he was just hoping the Monorail wouldn’t burst into flames that day. No, I believe he would turn to you with all the charm and sincerity that he is known for, smile, and say, “Oh, that would be the day I kidnapped the Vice President of the United States.” 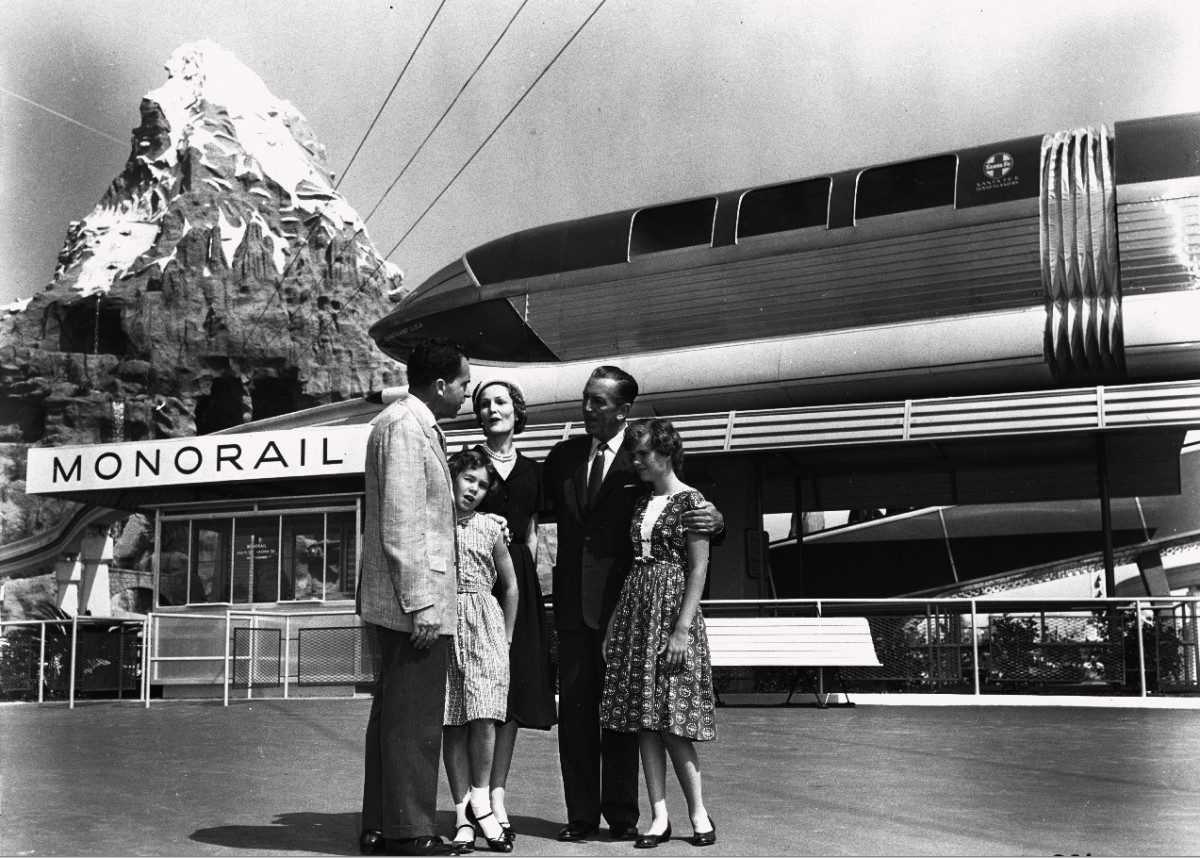 Bob Gurr’s job that fateful day was just to make sure Monorail Red (Monorail Blue was about two weeks behind schedule) would make it out of the Tomorrowland Station for the TV cameras. The Monorail had broken down every day leading up to June 14, so Gurr and German engineer Konrad Deller had to work day and night to make sure the train would function properly during its official debut. The two would go to the Disneyland Hotel for dinner, then adjourn to Deller’s hotel room to create sketches for replacement parts. A truck would come by around midnight, pick up the drawings, and take them to the Studio Machine Shop in Burbank. The engineers working overnight created the parts based on the sketches, and have them redelivered to Gurr and Deller the next morning. They would then install them in the train. Monorail Red finally made a successful lap around Tomorrowland without breaking down the night before its dedication. During dedication day, Gurr had the Monorail parked at the station, ready to go. “I set it there so we could get a shot for the television cameras,” Gurr told STORYBOARD. “That was the focus. All I had to do was drive it out of the dedication shot. It could burn up, but the TV people would’ve had their shot.”

But then, as Gurr stated, “Here comes the entourage.” 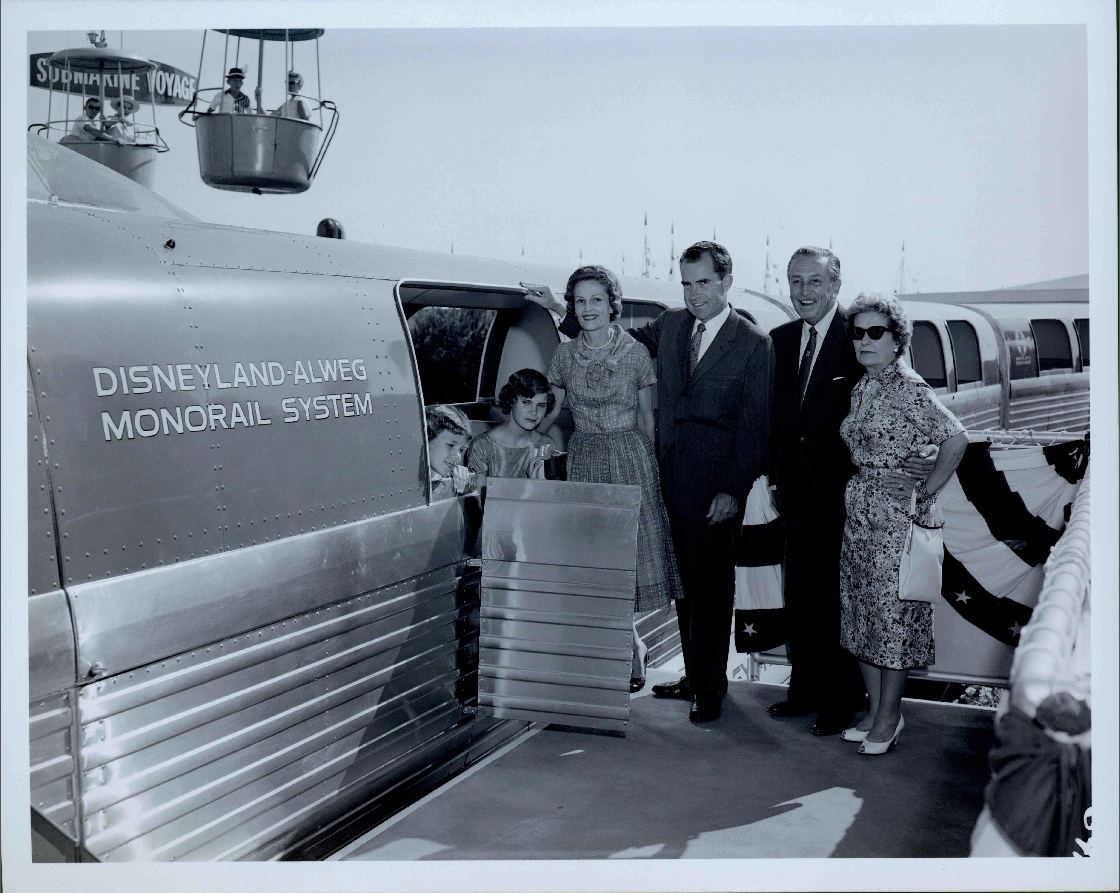 Walt Disney approached the train, along with Vice President Richard Nixon, Nixon’s daughters Julie and Tricia, Art Linkletter, Disneyland Security, and of course, the Secret Service. All of them minus the Security personnel boarded the Monorail, so Gurr fired up the 600-volt DC power to have the A/C cool down the cab. It wasn’t long before Walt said, “Let’s go.” Terrified, Gurr began driving. At first he was only scared that the train would break down and the TV shot would be ruined. But then Nixon noticed that the Secret Service had been left behind, which more than slightly increased Gurr’s anxiety. He continued driving through what must have felt like the longest lap of his life, and was absolutely relieved when they began to pull back into the station. Unfortunately, his relief didn’t last long.

STORYBOARD sat down with Mr. Gurr recently to dig up a few details from that infamous incident. 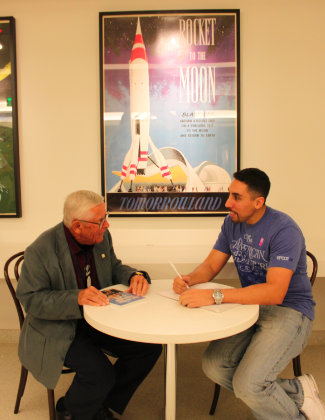 Keith: Is it true when you were slowing down to let Walt and Nixon and his girls off [after the first lap], it was his [Nixon’s] daughters who said, “We want to go again?”

Keith: What did Walt say?

Keith: And you saw the Secret Service guys start to run along side [the Monorail]?

Bob: They were trying to run towards me as I was coming in. And then when I sped up to keep on goin’, they were running trying to jump in it.

Keith: (laughs) Were the doors even open?

Bob: No, no. They were closed. There was no way they were gonna do that.

Keith: Was anybody laughing seeing this? Walt, or Nixon?

Bob: Nixon got a kick out of it. [Vice ] Presidents always try to escape [the Secret Service]. The fact that he now knew, he got rid of ‘em! To my great horror. 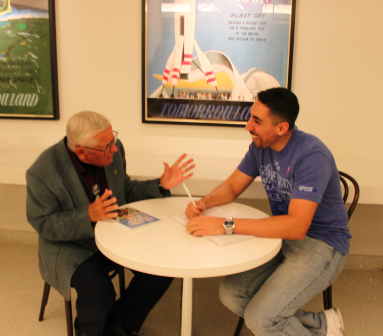 Keith: Did Walt say anything at that time? Did he make a joke, or laugh or anything?

Bob: Walt was having a good time. When there’s something that he’s got, and nobody else has got it, he’s a very proud papa. He was in an extremely good mood. The eyebrows were up, and when he was in those moods, he was really memorable.

Keith: And what was going through your mind on that second lap when you—

Keith: (laughs) You were just terrified?

Bob: Yeah. But then we got out and walked down the ramp. We made it all the way down to the bottom, and the Secret Service were sitting on the train. They didn’t even notice.

Bob: See nobody planned anything. Normally with Secret Service stuff you got a big plan. There’s always a new code word every day. All that stuff is tightly planned, and when Walt said, “Give ‘em a ride,” it was not in the script. It just upset everything. You don’t do that.

Thanks for sharing your memories of that day with us, Bob. And Happy 100th birthday, Richard Nixon!