Snow White and the Seven Dwarfs: The Opening

Seventy-five years ago on this exact day, Walt Disney's first feature-length animated film, Snow White and the Seven Dwarfs, premiered at Carthay Circle Theater on December 21, 1937. In celebration of this Disney classic, author and historian J.B. Kaufman's new book The Fairest One of All explores the making of Walt's first feature-length animated film, including an examination of each individual dwarf. Below is a short excerpt from this book—which is available now online and in our Museum Store, as well as a video we've put together, which features the highlights from the opening premiere of this ground-breaking film.

As Snow White moved inexorably toward completion inside the Disney studio, a wave of anticipation was building on the outside. At this time Snow White was still envisioned as a Christmas 1937 attraction, and the combined publicity forces of the Disney and RKO studios had been working to whet the appetites of the moviegoing public for the treat in store for them. . . . 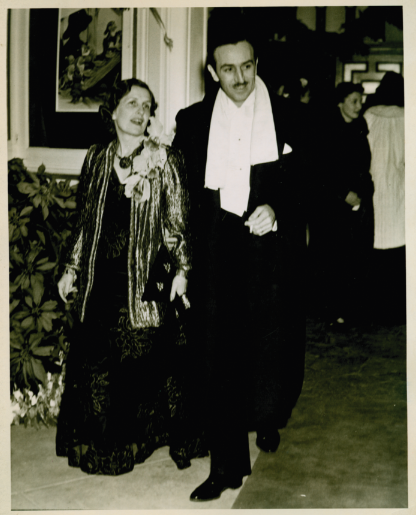 Tuesday, the 21st of December, dawned fair and mild. The showing of Snow White at the Carthay Circle was scheduled for 8:45 pm, but crowds began to arrive hours in advance to get a glimpse of the festivities. Special displays of Disney animation art had been set up for onlookers, and as the hour of the screening drew near, fans were treated to "personal appearances" by costumed Mickey and Minnie Mouse and Donald Duck. From "Dwarfland," brightly illuminated against the night sky, emerged another group of special guests: the Seven Dwarfs themselves—seven little people hired for the occasion, costume and wearing the character masks designed by "soft sculpture" artist Ted Wiedhaus. A special radio broadcast had been arranged over the NBC Blue Network, with announcers Don Wilson and Buddy Twiss interviewing Hollywood celebrities as they arrived. An orchestra playing songs from the picture, and Adriana Caselotti and Harry Stockwell were on hand to sing their numbers. Shirley Temple posed with the dwarfs; Marlene Dietrich, Douglas Fairbanks Jr., Helen Vinson, Claudette Colbert, Gail Patrick, Hedy Lamarr, Preston Foster, and even Chaplin, were captured by newsreel cameras or spoke on the radio as they entered. . . .

Along with all the "outside" celebrities, Walt and Dave Hand were asked to speak to the radio audience too. Scripts had been prepared for both of them, and Hand stuck closely to his script. Walt, caught up in the festive spirit of the evening, improvised his comments, and was so happy and excited that he couldn't remember the dwarfs' names—an endearing moment that was noted by several columnists.

Then, at last, came the showing of the picture itself. The audience packed into the Carthay Circle included several hundred Disney artists who had purchased tickets so they could attend the premiere. For all of them, this was the moment of truth. All their monumental effort for the previous four years was riding on this evening. What would this glittering array of Hollywood royalty make of their picture?

From the moment the opening titles flashed on the screen, it was clear that the audience was utterly captivated with Snow White. ...

For more details on the opening--and making-- of Snow White and the Seven Dwarfs, pick up The Fairest One of All in the Museum store or online by clicking here. Snow White and the Seven Dwarfs: The Creation of a Classic, which is on view now through April 14, 2013, celebrates Walt Disney’s vision and the artistry of his dedicated staff, illustrating how they shaped and defined an entirely new American art form through their creation of this groundbreaking film.