From Sketch Artist to Animator: Inspecting Some Pieces by Retta Scott

Though the Walt Disney Family Museum offers exciting new displays and stories in each special exhibition that opens, there are also delightful new discoveries to be found in the main museum galleries when case rotations are made. Let’s take a look at one of the latest rotations, in the case dedicated to one of Walt’s most distinctive feature films, Bambi (1942).

As one of history’s most endearing storytellers, Walt Disney remained dedicated to one thing: quality. To do this, Walt knew that he needed the best artists he could find. He was willing to recruit anyone from anywhere if they were able to contribute something to the story he was trying to tell. While others of the time may have been limited by prejudice or society norms, Walt remained open-minded to any artist who was willing to work hard and use their imagination—including employing the talents of many female artists.

One such artist that Walt lauded was Mary Blair, an artist who remains astonishingly unique to this day and whose name continues to be recognized as an innovator of her time. However, there were other important female artists who graced the halls of Walt’s studio in the earliest years. One of them, a good friend of Mary’s, helped create one of Bambi’s most exciting scenes.

Retta Scott was born in Omak, Washington in 1916. After attending high school in Seattle, she moved to Los Angeles to attend the Chouinard Art Institute, a school that fostered many young talents who would soon find their way to Walt’s growing studio. From asearly as her childhood drawings, Scott always demonstrated an aptitude for picturing animals. At Chouinard, she’d make regular visits to the nearby Griffith Park Zoo, filling page after page with sketches of the animal inhabitants, each image more striking than the next. 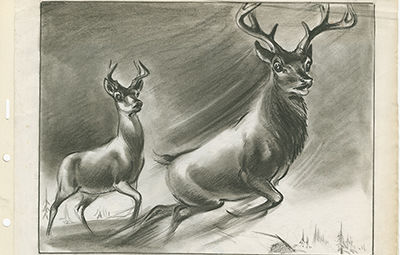 Arriving at the studio in 1938, she was assigned to the story department and began work on Bambi. She joined fellow artists like Mel Shaw and Marc Davis in field trips to the zoo, applying her passion for drawing animals. Almost immediately, her striking charcoal studies of the powerful sequence where Bambi battles a pack of hunting dogs caught the attention of Walt and the production team. As Frank Thomas and Ollie Johnston described, “A startling moment for us came when we saw Retta Scott’s amazing sketches of the vicious dogs…”

The charcoal pieces are framed in black borders, highlighting the cinematic potential of their composition. Though it’s not likely that Scott worked on any films before her time at Disney’s, her work demonstrates an incredible mastery of staging, lighting, and camera placement. Like a cinematographer, she places her characters dramatically in a symbolic clash between the elegant deer and ferocious dogs. There is something classical to the poses, as if they are statues of antiquity from Greece or Rome, their muscularity accentuated to the extreme. There is a stretching of time in each drawing, and we can almost feel the strength emanating from the paper.

Though Scott's work was considered conceptual, meant as inspiration for the other artists, it seemed all too clear that no one would be able to convincingly animate the dogs as well as the artist who first gave them life in charcoal form. “When the time came, there was no question but that [Scott] would somehow have to do the animation herself,” Thomas and Johnston would say. And so The Walt Disney Studios would welcome its first officially credited female animator. With guidance provided by animator Eric Larson, Scott took on the challenge with characteristic gusto. The results were striking, unforgettable, “one of the most chilling and exciting pieces of action ever to be animated.”

It was only recently that these masterpieces were unearthed in a family collection. After years of reminiscence by studio artists who remembered seeing Scott’s work pinned to the story room walls, we can now finally see them for ourselves. Though Mary Blair is perhaps the most famous of Walt’s female artists, she never actually animated a single scene. It is to Retta Scott that we can look to for opening the doors for generations of female animators to come. Be sure to peruse the main museum galleries to see the inspirational sketches that started it all!

Lucas O. Seastrom is a writer, filmmaker, and contracting historian for the Walt Disney Family Museum.