Just ONE more day until the opening of our first major exhibition--Snow White and the Seven Dwarfs: The Creation of a Classic--we continue our countdown by taking a closer look at our next dwarf. In celebration of the 75th anniversary of this Disney classic, author and historian J.B. Kaufman's new book The Fairest One of All explores the making of Walt's first feature-length animated film, including an examination of each individual dwarf. Below is a short excerpt from this book—which is available now online and at our Museum Store—all about... SNEEZY! 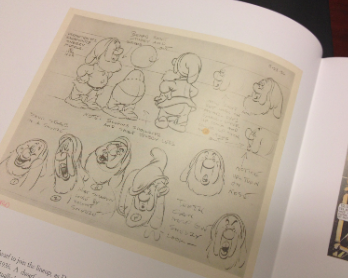 Sneezy was the last dwarf to join the lineup, as Deafy's replacement early in 1936. A dwarf named Sneezy-Wheezy or Gaspy had actually been proposed very early in story development, in the "Manuscript" outline of August 1934. Described in this document as a chracter who was "Always sneezing or, perhaps, about to sneeze" and who "Talks like he had a cold in his head," he was also "Dapper—quick movements—nimble dancer." Walt apparently liked this suggestions; his copy of the outline, preserved today in the Walt Disney Archives, bears his handwritten "OK" next to the description of this character. But the idea was quickly forgotten, and nothing more was heard of it for more than a year.

Early in 1936, as Deafy was eased out of the picture, the sneezing dwarf returned to take his place. Sneezy's ailment, unlike Deafy's, could give no possible offense; sneezing was accepted as a comedy staple by audiences everywhere long before Sneezy arrived on the scene. As early as 1894, Edison's famous experimental film Fred Ott's Sneeze had been received as "a topic inclined to incite a smile." Ten years later, Winsor McCay had built an entire comic strip around sneezing: Little Sammy Sneeze featured a little boy who, week after week, disrupted some gathering, endeavor, or event with a mighty sneeze. (The last panel almost invariably depicted Sammy being booted out of the premises, even though, as the title banner apologetically explained each week, "He never knew when it was coming.") Subsequent artists and entertainers, including Walt himself, continued to play cataclysmic sneezes for laughs. Sneezy, inducted into the Seven Dwarfs in 1936, carried on the tradition. . . .

In Short, Sneezy's sneezes were a gimmick drawing on an American comedy tradition. Of all the dwarfs, he was the only one whose name denoted a physical condition rather than a personality type or trait. Still, as story development proceded and Sneezy was further integrated into the picture, rudiments of a personality began to emerge from his respiratory affliction. "There's more to him than just the sneeze," Perce Pearce declared. . . .

To find out more about Sneezy and the other six dwarfs, pick up The Fairest One of All in the Museum Store or online by clicking here. Snow White and the Seven Dwarfs: The Creation of a Classic will be on view from November 15, 2012 to April 14, 2013, the exhibition celebrates Walt Disney’s vision and the artistry of his dedicated staff, illustrating how they shaped and defined an entirely new American art form through their creation of this groundbreaking film. For more information and details about our first major exhibition, please visit waltdisney.org/snow-white.