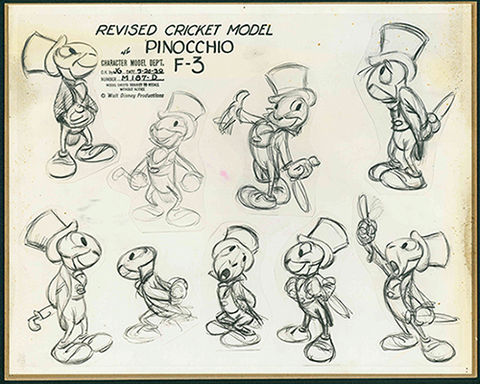 In the early 1930s Walt Disney was looking for an encore that would live up to the success of Snow White and the Seven Dwarfs, while continuing to push the boundaries of animation. Walt saw inspiration in Carlo Collodi’s book Pinocchio. However, the transition from page to screen was not easy, each character from the book had to be made to fit Walt’s vision for the film. While the main character, Pinocchio, went through a full transformation from bratty, clunky wooden puppet, to the naïve, loveable, wooden boy in the movie; other characters were likewise transformed or imagined for Disney’s version of Pinocchio.

Jiminy Cricket, the loveable cricket who plays the role of Pinocchio’s conscience, had a very different storyline in the original story. In the fourth chapter of Collodi’s book, the Talking Cricket was a philosopher who attempted to advise Pinocchio, but the puppet got mad and smashed the cricket. When writing him into the film his character went through several reimaginings during the planning and story stages of Pinocchio. At one point he was to be a vessel for the Blue Fairy who brings Pinocchio to life, at another he was the bumbling guide of Pinocchio who would bungle sage advice and suffer from temptation to the point that he also turns into a donkey along with Pinocchio on Pleasure Island. According to story artist Joe Grant, Walt Disney came to the idea that he wanted the cricket to be a conscience for Pinocchio. Walt went to veteran animator, Ward Kimball, with the assignment of Jiminy Cricket. Kimball was excited to be assigned a new character as he was feeling a little disheartened with his job at Disney; both of his major assignments in Snow White, the fully-animated “Soup-Eating” sequence and the in-development “Bed-Building” sequence had been cut from the final version of the film. When Kimball went to talk with Walt about his disappointment and possibly wanting to leave, Walt instead took it upon himself to sell him on Jiminy, assuring Kimball that this new character would play a major role in Pinocchio. Kimball would later say, “Walt was a salesman!” 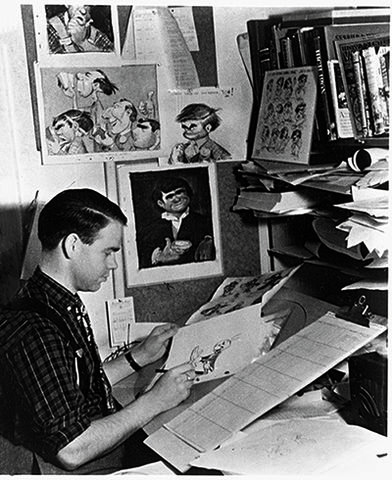 Feeling reassured about his role at Disney, Kimball set to work on designing the Jiminy Cricket that we have come to know and love. Starting with the source material, Kimball made early versions of Jiminy more insect-like. However, Kimball recognized his approach would not be very appealing to audience, which Walt confirmed, saying, “Ah, it’s too ugly!” Therefore, Kimball redesigned Jiminy many times, each time taking away more and more distinctly insect features, until what finally emerged was what Kimball dubbed a blob saying, “It is not a cricket, it is a blob. It is a little man-creature with no ears, and he wears little English outfits, and the only reminiscence of a cricket’s wings are the tails of his coat!” He added, “The audience accepts him as a cricket because the other characters say he is.” Although Walt loved Kimball’s redesign of the character, Kimball was never fully satisfied and ended up disliking the finished product; years later he said, “And, I still hate him!”

With the look of Jiminy Cricket in Kimball’s capable hands, his personality was similarly undergoing changes. Originally a pompous, uptight little cricket, Jiminy’s personality was changed when the voice talent, Cliff Edwards, was added to the film. Edwards was a well-known singer and actor who was famous for the song, “Singin’ in the Rain” and his use of the ukulele. His lively personality and use of ad-libbed American slang started to change how Jiminy would be portrayed in the finished film. Walt explained Edwards’ effect on Jiminy by saying, “At first we made Jiminy a sort of pompous little fellow—kind of a windbag you know. As it turns out, Cliff was somewhat responsible for changing Jiminy’s character. Cliff’s voice had so much life and fun in it that we altered the character to conform with the voice.” As Jiminy’s character became more defined so did his role within the film, he ended up not just being Pinocchio’s conscience, but also the narrator of the film.

Walt Disney had a keen eye for detail and story; he paid just as close attention to the minor characters as he did the lead. As we can see through Jiminy’s evolution, each piece of the story was equally important to ensuring the success of the characters and the film as a whole. Without Walt’s attention to detail, the characters that we love today would not exist.

Come view original artwork, including some of Ward Kimball’s Jiminy character model sheets, at our newest exhibition Wish Upon a Star: The Art of Pinocchio running through January 9, 2017 in the Diane Disney Miller Exhibition Hall. 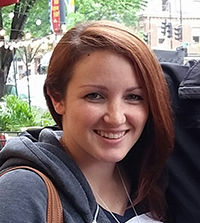