Recap: Lady and the Tramp - A Technical Triumph

The animated films of Walt Disney have long been an inspiration to artists and film makers. On April 26th, in The Walt Disney Family Museum Theater, Pixar’s Academy Award winning film production designer and director, Ralph Eggleston, shared his love of Disney’s 1955 classic, Lady and the Tramp, and its direct influence on the first Pixar feature film, Toy Story (1995). Museum guests were treated to rarely seen concept art and film clips that showed the evolution of the film’s characters and Walt Disney’s first use of the wide screen format, Cinemascope, in an animated feature film.

Ralph Eggleston brings tremendous credentials in the art of film making. In 1992, Pixar’s John Lasseter chose Ralph as the art director for Toy Story, the first all-digital film in the history of motion pictures, for which he won an Annie Award for Best Art Direction. Since then, he has contributed to the story and/or design of Monsters, Inc. (2001), Finding Nemo (2003), The Incredibles (2004), WALL-E (2008), and Up (2009). In 2002, he won an Oscar for his short film For the Birds, which he wrote, designed, and directed.

Before detailing the origins and making of Lady and the Tramp, Ralph Eggleston, a self-described Disney “nerd,” set the historical and cultural context of the time in which Lady and the Tramp was made. During World War II, The Walt Disney Studios devoted its resources to making training films for the war effort and actually lost money fulfilling government contracts. In the years after the war, America was changing. Women remained in or entered the workforce in numbers never before seen. Teenagers became a force to be reckoned with. Television was in its infancy, but was certainly impacting how Americans obtained entertainment and was seen as a threat by the movie industry. Walt Disney was questioning the profitability of feature length animation at his studios, while other studios were looking for ways to get Americans out from in front of their TV sets and back into the movie theaters.

In 1950, Walt Disney gambled on one last animated feature whose success or failure would determine whether or not the studios would continue to make animated features. Cinderella (1950) proved to be a rousing success and provided the profitability that enabled the studio to continue making animated features. It ushered in a new era of animated classics including Alice in Wonderland (1951), Peter Pan (1953), and in 1955, Lady and the Tramp. In addition, the success of Cinderella provided the means for Walt Disney to diversify his interests into new realms including television and theme parks.

The origins of Lady and the Tramp trace back to 1937 when story man Joe Grant shared some sketches of his springer spaniel named Lady with Walt Disney. Walt liked the sketches and asked Grant to create a storyboard. Walt was not enthused with the final storyboard and the project went nowhere. In 1943, Disney read a story written by Ward Greene in Cosmopolitan magazine entitled “Happy Dan, The Whistling Dog.” He bought the rights to the story intending to use Dan in a feature film. In 1949, Grant’s original sketches were found in the studio archives and they became the basis of a more solid story that evolved into the final film. Concurrent with the early stages of the film’s production, Ward Greene wrote the novel Lady and the Tramp: The Story of Two Dogs, published in 1953. This gave audiences two years to become familiar with the story and characters portrayed in the 1955 release. 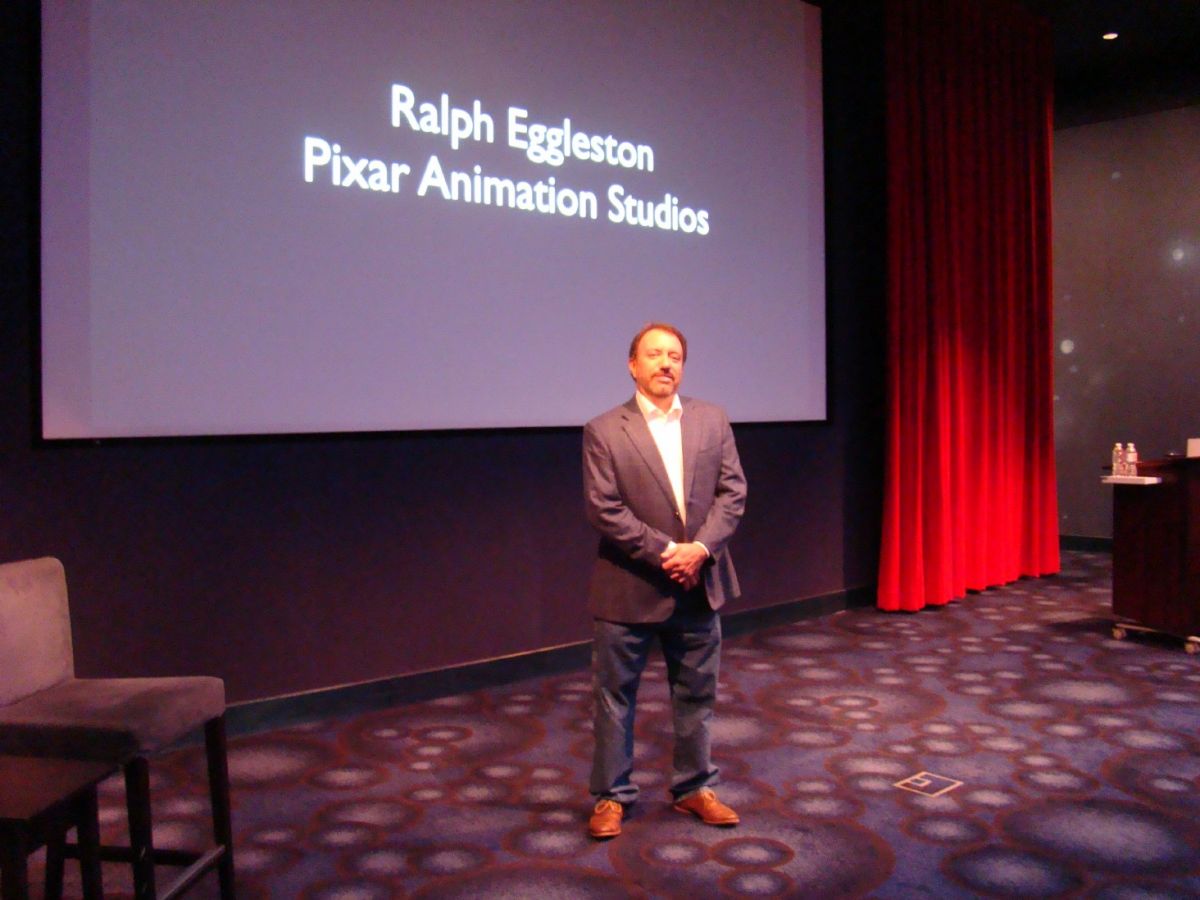 The next segment of Eggleston’s presentation featured rarely seen early sketches by famous Disney artists which showed the evolution of some of the film’s main characters. For example, the initial sketches of Lady show her as the brown and white springer spaniel belonging to Joe Grant. Later sketches showed her transformation into the tan cocker spaniel we see in the film. The rat, which is one source of tension in the film, is seen as a comic character in the early sketches. As production progressed, the rat took on a sinister and menacing appearance. The concept drawings shown included the work of several prominent Disney artists including: Mary Blair, Joe Rinaldi, Eyvind Earle, and Claude Coats.

Production of Lady and the Tramp was underway when Walt Disney made the decision to present the film in Cinemascope, a widescreen format in which an anamorphic lens “squeezes” the image onto standard Academy format 1:37:1 film. When projecting the film, the anamorphic lens “spreads” the image into a 2:55:1 widescreen image that is nearly twice the standard ratio. For Sleeping Beauty, Disney used the Technirama format, which used larger 70 mm film size, rather than the Cinerama process. Walt Disney’s decision created some hurdles for the studio. Backgrounds needed to be widened to fill the wider format.  A “standard” format version had to be shot to play in the many theaters across the country that did not have the capability to project the Cinerama widescreen format.

Ralph Eggleston commented that Lady and the Tramp was the most mature animated film Disney had made up to that point. The love story was fully developed between two equally appealing characters, whereas in prior films, the prince/male role tended to be rather one dimensional. Interestingly, the strong relationship between Lady and Tramp was reminiscent of an earlier film which also featured strong male and female lead characters, It Happened One Night (1934). The strong chemistry and banter between Claudette Colbert and Clark Gable was evident in the clips shown, which included the famous hitch hiking scene. Eggleston went on to point out that the film was unique in that the entire story was told from the perspective of the animals and not the human characters. Therefore, animation and backgrounds were drawn from a low perspective, closer to the ground. To plan the interior shots, a scale model of the Darling house was made to provide realistic perspective. At this point, several clips from the film were shown which highlighted several of the points Ralph had made earlier, such as the low camera angle perspective of the dogs, strong character development, and multiple aspect ratio format versions of the same scene.

Lady and the Tramp is a very special film to Ralph Eggleston personally, and to Pixar Animation Studios. In fact, it was Ralph who selected this film to speak about at The Walt Disney Family Museum. The reasons are many. In Eggleston’s view, Lady and the Tramp was the most mature love story that Walt Disney had created to date. The character development was superior, especially for the male lead role. It introduced widescreen format to animated features. But, perhaps most importantly, it was the first animated feature to tell the story from the perspective of the animals. This point was not lost on Ralph when he was asked to do the art direction for Pixar’s first feature film Toy Story. Lady and the Tramp had inspired Ralph and Pixar to tell this story from the perspective of the toys. Ralph ended his presentation with a clip from Toy Story where Buzz and Woody meet for the first time. The closing clip drove home the idea that Walt Disney and his art has inspired a new generation of filmmakers decades after his work was completed and will, no doubt, continue to inspire artists for decades to come.

Ralph Eggleston is currently working on a new Pixar feature entitled Inside Out, the story of the inner workings of a young girl’s mind. We wish Ralph good luck and eagerly anticipate the film’s release. 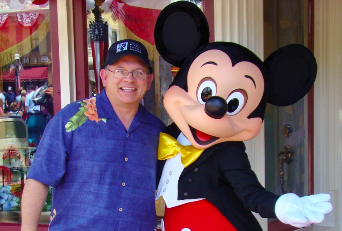