"Over There": Walt Disney's World War I Adventure

In celebration of next Monday's Memorial Day, Museum Volunteer Thomas Price has penned the history of Walt's experience in joining the army and serving time in World War I.

In 1918, when George M. Cohan song “Over There” entreated young men to “grab your gun, on the run...do your bit, show your grit...make your Daddy glad ...make your Mother proud,” thousands heeded this call. Four years into World War I, a young Walt Disney was one of them. Filled with patriotic enthusiasm, and captivated by recruitment ads like “The Red Cross versus the Iron Cross,” young men barely past boyhood signed up to travel overseas and fight in The Great War. As Walt reflected much later, “The things I did during those ten months I was overseas added up to a lifetime of experience...I know being on my own at an early age... made me more self reliant.” Exactly how he got there, however, is a story unto itself. 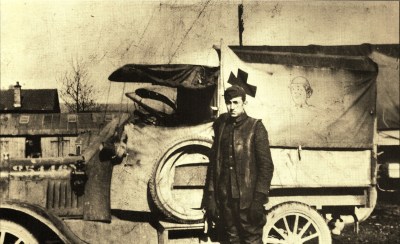 Although World War I began for Europeans in 1914, America initially took little notice of it. In fact, the pre-war U.S. Army was composed of a scattered handful of small regiments and the state-controlled National Guard militia. When the U.S. finally declared war on Germany in 1917, General John J. Pershing was given command of the American Expeditionary Force to fight overseas. As the Yanks were shipped “over there”, they were given the nickname “Doughboys.” Fighting trenchfoot and “cooties”, or body lice, and later influenza, they were on the offensive by 1918 involved in heavy fighting in France.
By the summer of 1918, the Germans were on every American’s mind, including Walt Disney’s. Living in Chicago where his father was involved with the O-Zell Jelly Company, Walt did not want to return to McKinley High School. He even had written to the principal Mr. Cottingham that he had been “disgusted” by his previous year there. Starting to dabble in the entertainment industry, Walt and his friend Russell Maas put a down-payment on a movie camera and intended to begin making children’s films. The war bug, however, had also taken hold of Walt. Two of his older brothers were already in the armed forces; Ray had been drafted in the Army, and Roy was an enlistee in the Navy. During one of Roy’s visits to Chicago from his Great Lakes posting, Walt met him at the train station and remarked later that his brother "looked swell in that sailor’s uniform.” This was very appealing to young Walt, who loved costumes his entire life, and had already been in uniform himself as a high school cadet, postman, gateman, and train “butcher”.  Further, Roy’s letters were full of “blowing bugles and ...patriotism,” Walt remembered. “I just had to get in there.” But Walt was only 16, and 17 was the minimum age for enlistment.
First, he tried to sign up for the Navy, but was turned down due to his age. Next, he and his friend Russell Maas attempted the Canadian armed forces, except Russell was rejected for his poor eyesight. Not wanting to go without each other, Walt and Russell concocted yet another plan: they would join the Red Cross Ambulance Corps, as they weren’t quite as particular on the subject of age. Applying as the falsified “St. John” brothers, these 16 year olds were told they still needed their parents’ signatures for their forms as well as passports. In the meantime, Russell’s mother had found a suitcase in the early packing stages, and suspecting something was afoot, alerted Walt’s mother, Flora Disney. Walt confessed the plan, but Elias, his father, refused to sign the enlistment documents, exclaiming “I might be signing your death warrant!”. Surprisingly, Flora took Walt’s side in the matter, saying “Three of my sons have left this family in the middle of the night. Walter’s determined to go, Elias, even if he has to sneak out like his brothers. I’d rather sign this paper and know where he is.” Angry, Elias concluded, “Forge my name if you want, but I won’t sign,” storming out. Flora did. Yet, Walt’s actual birth year reflected, 1901, would still keep him from the Ambulance Corps so Walt himself, determined to go, changed it to 1900. On September 16, 1918, he enlisted.
Walt thought of the whole business not as war but as adventure. Assigned to Camp Scott, the Red Cross Ambulance Training Facility on Chicago’s South Side, he wrote to friend Virginia Baker that he was “having a good time” and had “met lots of old friend[s] and made new ones already.” In the midst of learning how to drive and repair ambulances and trucks, Walt contracted influenza in the horrific global epidemic. Moved home to recuperate, his mother, although ill herself, nursed Walt and his sister Ruth through the fever and delirium. When he was well, Walt learned his ambulance unit - and his friend Russell - had already shipped out to France. Assigned to a new training base in South Beach, Connecticut, Walt became acquainted with a corpsman even younger than him - 15 year old Ray Kroc, later the founder of the McDonald’s fast-food empire. Interestingly, Kroc regarded “Diz”, as Walt was nicknamed, a “strange duck...whenever we went into town to chase girls, he stayed in camp drawing pictures.” 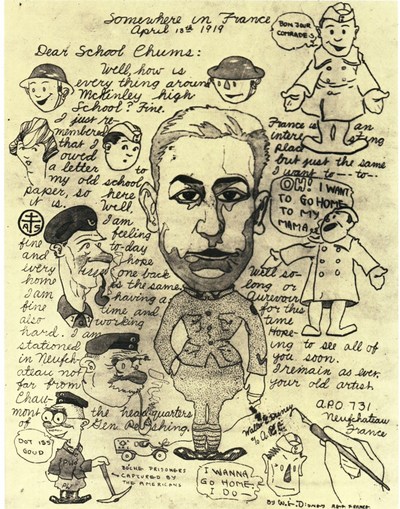 Then, on November 11, 1918, at 11 A.M., the Armistice was signed at Compiegne, France, ending the war and Walt’s dreams of glory. “I’ve never seen a sicker looking bunch than we were. Everybody else was celebrating the end of the war, but all we knew was that we’d missed out on something big,” he recalled.  Yet, the Red Cross still needed drivers, and on November 18th  he was awakened at 3 A.M. and told he was one of fifty  selected to go. He shipped out on the SS Vaubin, a converted cattle ship, bound for Le Havre, France, as part of Company A of the Automotive and Mechanical Section. Passing through mine-infested waters, he finally arrived “over there” on December 4, the day before his 17th birthday.
The realities of this adventure quickly became apparent, however, as they were herded onto a train bound for St. Cyr, near Versailles, outside Paris, where they found the food was inedible, the nights freezing, and the chateau unheated. Walt wrapped himself in newspapers and blankets for warmth. Yet, his comrades managed to celebrate Walt’s birthday with a round of cognac for the older ones and grenadine for the younger fellows.  Moved to the Hotel Regina near the Louvre in Paris and then to Evacuation Hospital No. 5 on the Longchamps racecourse at Auteil, young Walt, who had never been further west than Colorado nor east of the Mississippi, absorbed everything. He shimmied up a tree to catch a glimpse of President Woodrow Wilson in Paris, and played poker and chauffeured Army bigwigs around town. Later moved to Neuilly, just outside Paris, then to the charming village of Neufchateau in the rolling countryside, he encountered quaint shops and cobblestone streets, filing these images away in his mind.
Walt actually had little contact with the ill and injured, instead becoming, as he was for the rest of his life, an accomplished tour guide much in demand by visiting officials. He also befriended the proprietress of the canteen at Neufchateau, Alice Howell, who became a surrogate mother to him and a life-long friend. Alice was well acquainted with General Pershing, and arranged for Pershing’s 10 year old son to ride with Walt to visit the birthplace of Joan of Arc and enjoy a fried chicken picnic. Walt never forgot her special kindness to him.
When Walt was not driving, he did what he had always done - draw -sketches for the canteen menu, designs on the canvas ambulance flaps, and caricatures for his friends to send to girlfriends and families (for a small fee!).  “I found out that the inside and outside of an ambulance is as good a place to draw as any,” Walt later remarked. He also sent funny and poignant letters with sketches to The McKinley Voice, his high school newspaper. In one, Walt’s growing homesickness is revealed, where he wrote, on April 18th, 1918, “OH! I want to go home to my Mama!”. He sent cartoons to the magazines Life and Judge, too,  which were summarily rejected. By this time, Ray and Roy had returned to Kansas City, and by August 1918, loneliness trumped adventure, and Walt put in for a discharge.

While awaiting transport home, Walt ran into his old friend Russell Maas in Paris. The two teenagers decided that upon return to the states, they would build a raft and float down the Mississippi like Huckleberry Finn. Each fellow bought a puppy, and Walt carried his, “Carey,” named for a Chicago Tribune cartoonist,  everywhere in his musette bag. Russell shipped out for home, but a dock strike in Marseille kept Walt behind for twenty-three days. Ever the resourceful lad, he killed time by taking the streetcar from Nice to Monte Carlo each day, finally sailing out on the SS Canada. Even this voyage was fraught with difficulties, including insufficient fuel, and a savage ocean storm. Finally arriving in New York Harbor on October 9, Walt was discharged the 10th and back in Chicago the next day.

Finding Russell had abandoned the river raft trip in favor of a girl, and that his dog, sent home with Russell, had died, Walt decided to set his own course, and pursue work as an artist, in particular as a newspaper cartoonist.  His father was aghast at the impracticality of this plan, saying “Walter, you’re going to make a career of that, are you?”, intending for Walt to work at the Jelly Company. But Walt was determined - he had returned from France transformed from boy to man.  He had left Chicago a spindly and baby-faced youth, five feet eight inches tall only to return at 165 pounds, broad shouldered and strong from the manual work. Though on occasion he was still a prankster - particularly to his mother - Walt had matured emotionally into a man of self-reliance and independence. “I was able to ...line right up on an objective...and I went for it.” Seventeen year old Walt Disney had his dream and was ready to make it come true.

Thomas Price is a 19 year old high school graduate from Colorado Springs, Colorado, and has been a volunteer at The Walt Disney Family Museum since 2010, as well as a Museum Educator in Colorado since 2007. He has been a life-long student of Walt Disney’s life and work, even portraying him circa 1929. Thomas will enter college in the fall of 2012 majoring in history and minoring in film studies and museum studies.