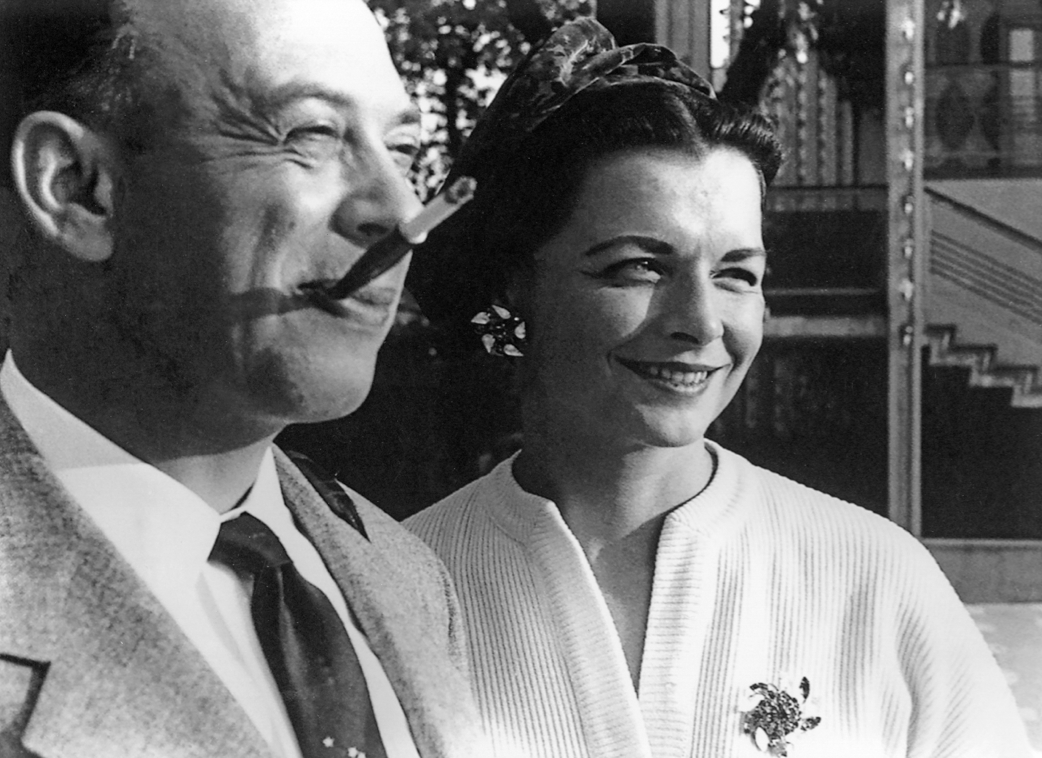 Marc Davis was a renaissance artist, capable of all manner of style and character in his art. He proved one of the greatest animators who ever lived, but always approached his craft as an artist first. As Disney animator Iwao Takamoto would say, “[Marc] leaned far into the fine arts approach to making a drawing statement…he was not an animator at heart.” His skill as a draughtsman often landed him the toughest of assignments. Such was the case on Sleeping Beauty (1959).

The film, whose style would be spearheaded by fine artist Eyvind Earle, would create great challenges for animators. The immensely detailed backgrounds and widescreen format proved just as visible within the frame as the normally highlighted animation. Where other animators struggled to adapt, Davis embraced the style of Earle.

Ever the studious draughtsman and well rounded artist, Davis had come to be assigned human characters, particularly females. “When they say, ‘This was the man who did the Disney girls,’ it really was, ‘this was the man who was given the Disney girls to do,’” Davis would say. Indeed he might have preferred the more elaborate of characters, but his ability determined his assignments.

The title character of Sleeping Beauty came into a long line of Disney heroines. In an already highly stylized picture, Davis, along with character designer Tom Oreb, crafted a leading lady of elegance. Aurora, and her alias Briar Rose, was more refined than previous heroines, both in character and design. She was dignified, her shape angular and precise in fusion with Earle’s vertically and horizontally inclined backgrounds. Her golden hair was touched with art nouveau or art deco style curls, an impressionistic flair, but highly realized. Aurora was self-confident, more of repose than the usual naiveté of Disney heroines. 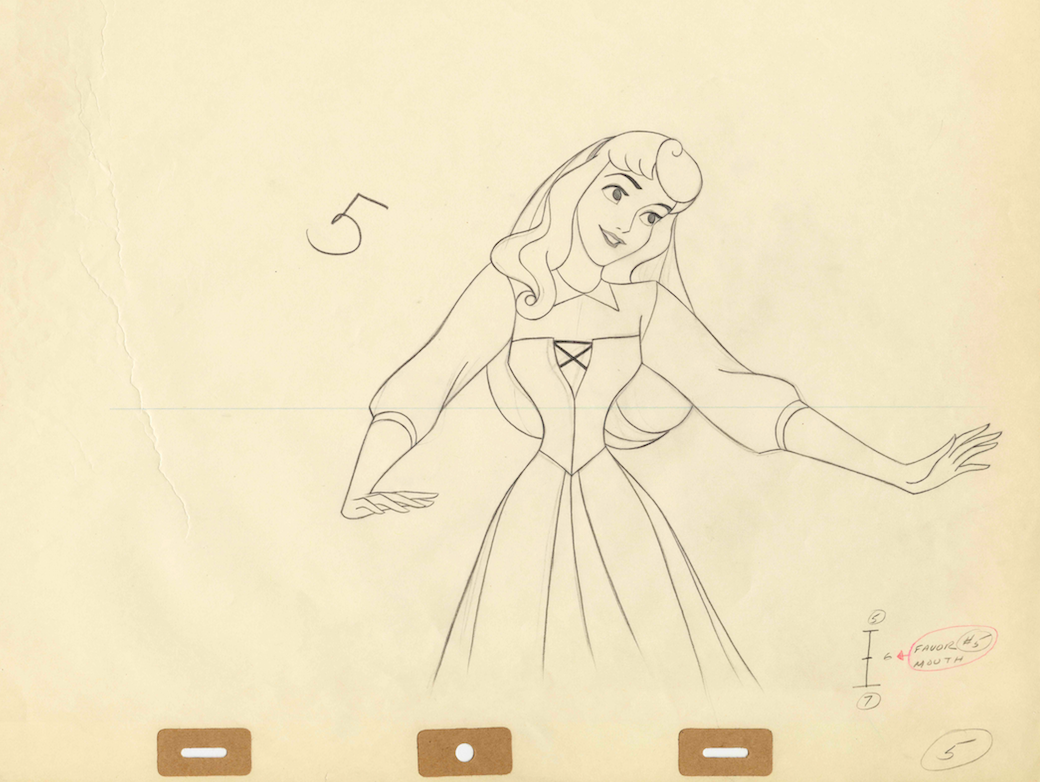 Iwao Takamoto, quality control animator on Aurora, remembers, “…it was such a laborious job to do that breakdown and inbetweening, because the drawings were so refined.” Admire the sharpness of line in a drawing of the heroine, as exact and defined as any in animation, an attention to detail rarely given. The designs of Earle, and the supervision of Davis, demanded such. In-between animators were lucky to finish a mere six or seven drawings per day.

An animation instructor at Chouinard Art Institute, Davis recruited one of its students—fashion designer Alice Estes—to develop a costume for actress Helene Stanley, the live-action model for Aurora. Alice would remember, “Marc drew the skirt he imagined, and movements that can work, and I realized the costume. He was very happy with the result. That was my first work for Disney.” Alice Estes would soon become Alice Davis, marrying the master animator in 1956, and have her own successful career at Disney.

Where Aurora’s refinement is enchanting, that of the equally alluring Maleficent is exciting in a manipulative manner. The villainess carries perhaps the greatest presence of any Disney antagonist, a testament to the design, and subsequently to the superb talents of voice actress Eleanor Audley. Maleficent’s silhouette is iconic, instantly recognizable. She is highly stylized and angular, matching Earle’s backgrounds well. The triangular descent of her lower gown nicely contrasts the bat wing style ascension of her collar. Davis would comment, “I sat down and went through a lot of material I had, including a book of Czechoslovakian religious paintings. There was this figure with the red and black drapery in the back that looked like flames that I thought would be great to use. I took the idea of the collar partly from a bat, and the horns looked like a devil.” Davis was also instrumental in the development of the Raven, which provided Maleficent a crucial character with which to react to and work with in scenes.

A strong example of artistic compromise on Sleeping Beauty comes in the case of the villainess. Davis’ original designs featured red trim to her flaming gown. Eyvind Earle, with final dictation in character design, requested a change to lavender. Rather than grudgingly dispute Earle as other animators did, Davis immediately agreed. Purple was more subtle, subdued to match the noble reserve of Maleficent’s presence. Red was too blunt in its visual cue, too direct of a read for the audience. Maleficent was a study in subtlety at her best.

“The old fashioned Disney characters did not look good over my backgrounds,” Earle would say. Davis and Earle’s designs were made in the height of mid-century Modernism. A fine artistic expression in a decade dominated by new design barriers being broken down in animation. The world of Sleeping Beauty, though steeped in historical influence, was very new. With Davis’ animation, the characters did not stand out from the backgrounds as had been tradition, they stood with the backgrounds. It was an artistic cooperation not seen as yet in Disney animation on such a scale.

In the television program, "Four Artists Paint One Tree," which was produced in conjunction with the release of Sleeping Beauty, Davis, the only animator featured among the four painters, states clearly, “One of my duties as Supervising Animator was to determine how the Princess was to be drawn. This involved combining the best features and suggestions of the many artists who worked on this character. Now making an animated film is a cooperative effort. Each artist must be prepared to modify his own pet ideas in order to achieve the best possible solution to the problem…but in the end the result is better than anyone could have achieved alone.” 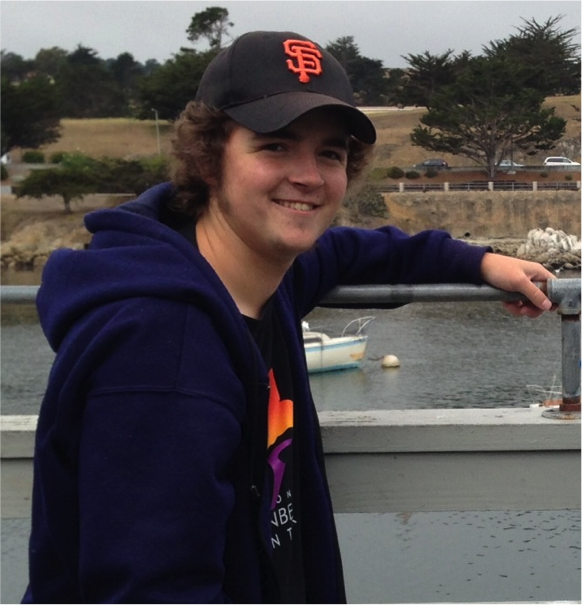