Walt Disney's 1960 film Pollyanna is being showcased by The Walt Disney Family Museum throughout March, in celebration of Women’s History Month, which highlights contributions of women to events in history and contemporary society. We've asked Chelsea Clair to share about her grandmother: Harriet Burns--the first female Imagineer!

Chelsea would like to dedicate this post to Harriet’s sister Wilma Draves who passed away this past March 15th.

My grandmother, Harriet Burns, was the first female Imagineer for Walt Disney. She joined the company in 1955, and contributed to many of the classic Disney rides we all know and love, such as: the Enchanted Tiki Room, Pirates of the Caribbean, It’s a Small World, the Haunted Mansion and many more! When she passed away in 2008, my mother, Pam Burns-Clair, decided to write a tribute book to honor her legendary mom--(Walt Disney’s First Lady of Imagineering, Harriet Burns). When we started the process I had no idea how much I would learn about my grandmother. I would like to share a little about who she was to me and what I learned about her after she passed away. 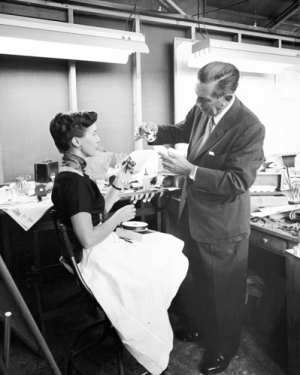 Writing my entry for the book was a challenge. What words could convey the magic of my Disney Grandma? These were the words I came up with: “Tackaonsitgo Popeye-Gotsinyammar Cockapinany-Kasuzyanna-Karachi Dianashey- Brianashey Jickalicky-Jackaboney Christianna- More.” That was the name of Grandma Harriet’s childhood goldfish. She told me the story many times as a kid, and I found it so enchanting that I wrote it down and put it in a memory box when I was 11, which I rediscovered when I was 24. This nonsense name--of course it made sense to her--says so much about the creative person she was, even as a child. She was born to be an Imagineer! By the way… “Tackaonsitgo” is “Go sit on a tack” backward! That’s the only part of which can I remember the meaning.

Before she was Harriet Burns, my grandmother Harriet Tapp was born in Texas on August 20th, 1928. She was in preschool during the depression, and had to be creative and make things to play with. Living through that era impacted her entire life, and definitely helped develop her artistic ability. After high school, her father told her he would only pay for her college education if she majored in Home Economics. She agreed but then changed her major to art! She married her college sweetheart, Bill Burns, in 1951 and had my mother, Pam, in 1952. They all moved to Hollywood the following year to pursue Bill’s dream of being an actor, but as he was not very successful, Harriet decided to look for work. She had previous experience working on displays at Neiman Marcus in Texas and found a job with Dice Display Industries making props. Dice went out of business in 1955 when she was tipped off that Disney was hiring. She was told they weren’t hiring women, but somehow she got the job--(she used to joke that they must have thought her name was Harry when they offered her an interview)! She painted sets and props for the Mickey Mouse Club, and even designed and built the famous “Mouse Clubhouse”. She was then moved into the Model Shop with Fred Joerger and Wathel Rogers because Walt wanted models for everything in his new theme park. She worked magic in the Model Shop (later renamed WED--now Walt Disney Imagineering), until she retired in 1986. 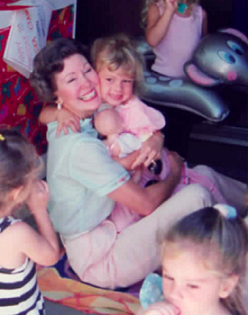 I was born a year before she retired, so I experienced her post-Disney life. I got a small sense of her impact, but that was just the tip of the iceberg. To me she was just an amazing grandma! Here are a few stories I shared in the tribute book:

“A visit from Gramma was the highlight of my year, and going to her house in Santa Barbara by myself as a child was even better! She had a room dedicated to teddy bears and a secret “Gnome Garden.” We wouldn’t just read stories, we would sculpt the characters out of clay and act them out. Gramma’s house was my own personal Wonderland—full of adventure and fun!

I will never forget my fourth birthday, thanks to Gramma! I was having a jungle-themed birthday party. All of us kids dressed up for a safari and brought along our jungle animal toys. Throughout the day, the doorbell would ring and surprises would appear on the doorstep. The first was an enormous box of popcorn, the second balloons. When the bell rang for the third time, we were stunned to find a pink elephant behind the door (who I later learned was really Disney animator Jack Boyd in costume!). He was there to deliver yet another giant box. We were all so excited about the elephant that we ignored the box at first, but the elephant finally directed our attention to it. With his help we lifted the lid and out popped Gramma! And of course she was holding a bag of peanuts for the elephant! I was blown away! It was the best birthday surprise ever. Every child should be so lucky to have a grandma like her.” (Walt Disney’s First Lady of Imagineering, Harriet Burns, page 27)

My sister, Haley, and I loved hearing our grandma’s stories about the Model Shop. A favorite was that she modeled the pirate (who sits on the bridge) after the family Milk Man! To this day I always think of her as I pass under him on the Pirates of the Caribbean ride. 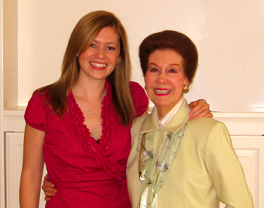 Grandma Harriet always loved the holidays, and each year we think of her as we hang rock candy remnants from the original Candy Mountain model on our Christmas tree. When the Candy Mountain project was cancelled the model was wheeled out into the parking lot to become the world’s sweetest bird feeder. Grandma salvaged boxes and boxes of rock candy, figuring they could be used for something else. Mom remembers hanging the candy on their tree in her childhood, and we continue the tradition to this day!

When Grandma Harriet became a Disney Legend in 2000 I started to understand how important she was to the foundation of Disneyland. As the years went by she seemed to become more and more famous. Even then it was hard to grasp because she kept her personal life and Disney life so separate. It was after she passed away in 2008 that I really got it. The outpouring of love and stories was overwhelming! I didn’t realize how many lives she touched and how many people loved and respected her! We heard stories of her remarkable talent, her wicked sense of humor and the way she made everyone feel important. Those stories inspired the book. Grandma Harriet was a pioneer in so many ways—as a woman working in a man’s world and also as a class act. She was a true Imagineer in life and in Disney, and I will always admire her for that! 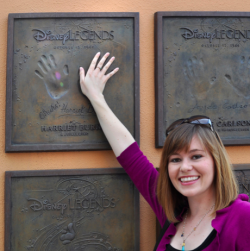