I'll Always Be Irish- Walt Disney and the Emerald Isle

In observance of St. Patrick’s Day, our consulting historian, Paula Sigman Lowery, offers this tribute to Walt’s relationship with Ireland. 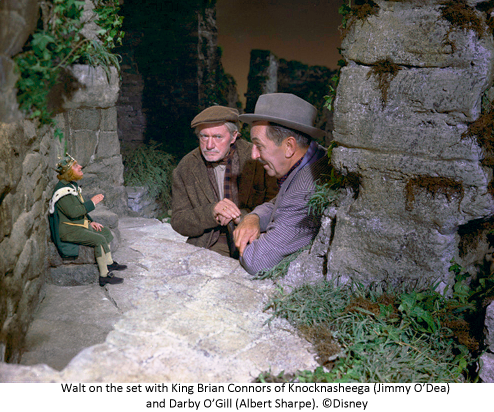 Although the Disney family origins can be traced back to eleventh century Isigny-sur-Mer in France, Walt’s ancestors spent a few hundred years in England (where their name was Anglicized from d’Isigny to Disney), before a group of them settled in County Kilkenny, Ireland. 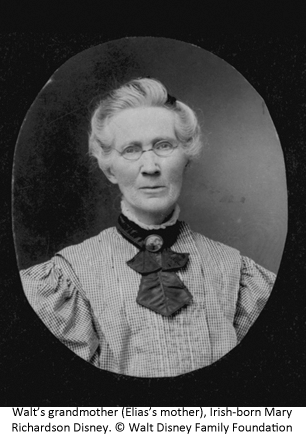 Walt was an American through and through, but he always had a fondness for the stories of Ireland and its people…especially the little ones. As he was rebuilding his studio’s production efforts after World War II, he turned his attention to thoroughly American stories such as Song of the South and So Dear to My Heart, yet also looked to what his friend, actor Pat O’Brien, would later call “beautiful small little island glimmerin’ and sparklin’ and laughin’ in the middle of the sea.”

In November 1946, he wrote in his annual birthday letter to his sister, Ruth:

“After the premiere [of Song of the South] we are flying up to New York and sailing on the Queen Elizabeth on the 14th for England and then over to Ireland.

“We are starting a picture on the Leprechauns or ‘little people’ as they are called in Ireland, so we plan to spend most of our time there gathering background material and learning all we can about Irish folk-lore.”

It would take another fourteen years before Walt’s Leprechaun picture became a reality, and although it was made entirely on the lot at the Disney Studio, it feels genuinely Irish. Darby O’Gill and the Little People, starring Albert Sharpe, Janet Munro, Sean Connery, and Jimmy O’Dea, today continues to enchant audiences (and enthrall special effects artists) with its storytelling and technical wizardry. 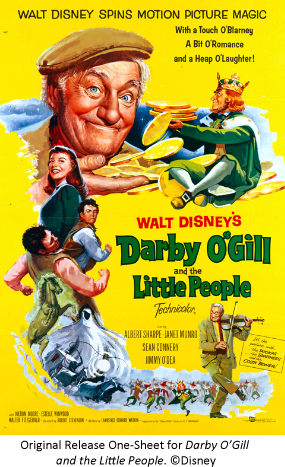 In the promotional television episode “I Captured the King of the Leprechauns,” Walt proudly proclaims, “I’m half-Irish,” as he tells Pat O’Brien of his long fascination with the little people, and shares with audiences the story of his journey to entice King Brian to star in his film. “I went Irish all the way. I even crossed the ocean in an Irish airlines plane.”

Walt and Lilly really did visit Dublin for the film’s premiere, where he was welcomed royally. He wrote in his 1959 birthday letter to Ruth, “the Irishers presented me with a pony which they shipped over here. The little fellow —who, incidentally, was named ‘Darby O’Gill’—is being broken and fattened up and will eventually make a marvelous pony for the grandchildren.”

The music of Darby O’Gill sounds authentically Irish, featuring reels, fiddles, and a charming song by Oliver Wallace and writer Lawrence Edward Watkin, “My Pretty Irish Girl.” A few years later the Sherman Brothers brought Irish music to the forefront in their last musical for Walt, The Happiest Millionaire.

Composer Richard Sherman explains that “I’ll Always Be Irish” was not, as some have surmised, written to pay tribute to Walt’s heritage, but as sung by Tommy Steele as the Irish immigrant John Lawless, it was developed to convey both the character’s story and personality. His dual desire to be a good American while remaining an Irishman at heart were important traits to present to the audience—and Walt no doubt knew that, with the immigrant history of America, it was a sentiment that would resonate with many in the audience. 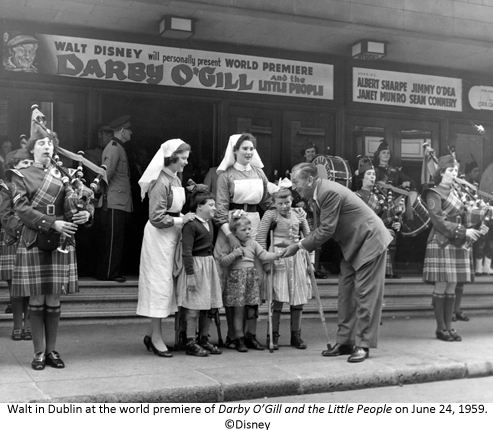 Richard remembers too that it was “an opportunity to put in an Irish reel,” which Walt loved. He often visited the set, especially when they were filming the Irish reel dance.

“He truly enjoyed the song,” Richard recalls, “and enjoyed when I sang it for him. I’d be at the piano in his room and he’d say, ‘Let me hear the Irish one again.’ He liked the sentiment of it. He truly got a kick out of the American-Irish concept; he was really proud of being American, but he was truly proud of his Irish heritage.”

Richard remembers Walt showing them a photo of him and Lilly at Disney Street in London, saying, “It’s an old Irish name…”

I’ll always be Irish, a fact I’ll not deny.

I’ll always be Irish, and I’ll hold me head up high.

I’ll wear the green Saint Pattie’s day and yet for all of that,

I’ll be truly as American as Casey at the bat.

To all of you— full Irish, half-Irish, or no Irish at all—you’ll always be Irish on St. Patrick’s Day.