“The Gremlins” and a Tale of Two Storytellers

In observance of National Aviation Day, here is the soaring tale of how a filmmaker and a flyer formed an unlikely partnership as storytellers: Walt Disney and Roald Dahl. 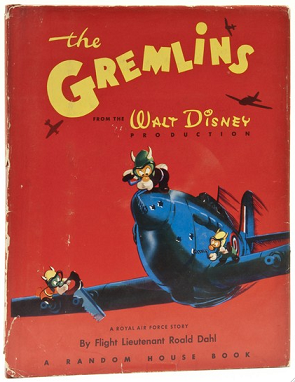 Long before the outbreak of World War II, Walt Disney and his team had already begun to cement their legacy as storytellers, sharing the comedy and adventures of Mickey Mouse and Donald Duck, and the emotional stories of characters such as Snow White and the Seven Dwarfs (1937) and Pinocchio (1940). In addition to the many projects Disney participated in to support of the War Effort, the company continued to tell stories of characters dear to our hearts, such as Dumbo (1941) and Bambi (1942).

Roald Dahl, in contrast, was just beginning to establish his own proficiency as a storyteller, but yet to create the beloved characters that are now so well-known; Charlie Bucket and Willy Wonka, the BFG, Mr. Fox, and Matilda. Dahl’s first effort to share his storytelling skills in the realm of the fantastic was in a little-know project for Walt Disney Productions, The Gremlins.

Roald Dahl connected with Walt Disney on July 13, 1942. At the time Dahl was serving in Washington, D.C. as an assistant air attaché with the Royal Air Force (RAF), to help create a kind of British propaganda to keep America interested in, and sympathetic to, Britain’s war efforts. Dahl had written about his RAF experiences, including a story called “Gremlin Lore” about the mythical creatures that “sabotaged” RAF planes. Since he was a serving officer, Dahl was required to submit everything he wrote for approval by British Information Services. The officer who read it, Sidney Bernstein, passed it along to Walt Disney, who was looking for War–related stories to develop as films. 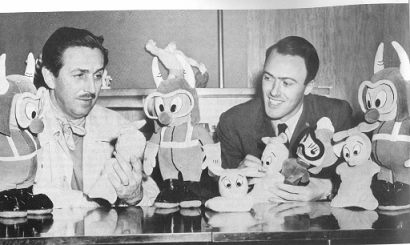 Dahl received a cable from Walt communicating that The Gremlins had possibilities, and Walt was interested in securing the story for a project. Following the initial cable, through Summer and early Fall, Dahl and Disney corresponded with regularity to discuss turning the story into a film, featuring both live action and animation, exchanging ideas and comments on sketches of what a gremlin should look like. It wasn’t until late in November of 1942 that Dahl was given official consent by the RAF to participate in the development of the picture, and granted leave to visit the Burbank studios for 10 days.

The 26-year-old Dahl was thoroughly impressed by the Disney operation, but also succeeded in connecting with Walt on a personal level. Upon discovering a shared fondness for Rudyard Kipling, Walt dubbed the six-and-a-half-foot tall Dahl “Stalky” after the character in Kipling’s Stalky & Co. (1899). While at the Studio, the author persuaded Disney to produce an illustrated book version of the story in anticipation of the release of the film. In April of 1943 the Disney studio partnered with Random House to publish The Gremlins: A Royal Air Force Story by Flight Lieutenant Roald Dahl. Penned by Dahl and illustrated by Disney Legends Bill Justice and Al Dempster, and with a cover design by Mary Blair, the book was considered an international success, with a run of 50,000 copies in the United States (and 30,000 more sold in Australia). Efforts to reprint the book, though, were stymied by the wartime paper shortage. 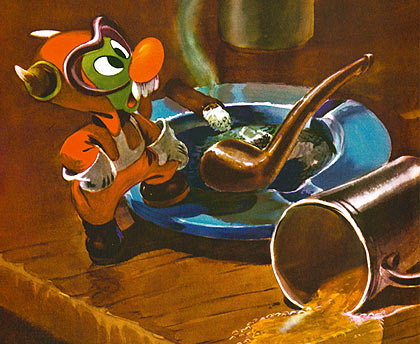 With somewhat mixed fortune, the book was to be the only lasting portion of the project. Several factors led to the demise of the film projects, both the feature-length live action/animation concept and the idea of animated short subjects. Because Walt was unable to secure the exclusive rights to the subject of “gremlins,” other studios were already distributing gremlin-based cartoons, and the window of opportunity to capitalize on the characters’ popularity was thereby shortened. Additionally, the RAF, while agreeing to share revenue with war charities, also retained the copyright to the gremlins, and demanded final script approval. These factors combined to limit the viability of Disney’s involvement in the proposed projects.

This short-lived partnership was far from a loss, however. While Walt had already established his reputation as a storyteller and filmmaker, The Gremlins opened the door for Roald Dahl and his writing career. In his short story “Lucky Break,” Dahl writes, “Each day, I worked with the great Disney at his studio in Burbank, roughing out the story line for the forthcoming film. I had a ball.” Now known as the imagination behind so many favorite stories that enthrall children and adults alike, it is fascinating to know that Dahl began with The Gremlins—and guidance from Walt Disney.

Images above: 1) © Disney. 2) Walt and Flight Lieutenant Roald Dahl are beset by gremlins at the Disney Studio in 1942. © Disney. 3) Gremlin Gus in one of the illustrations for Dahl's book. © Disney.