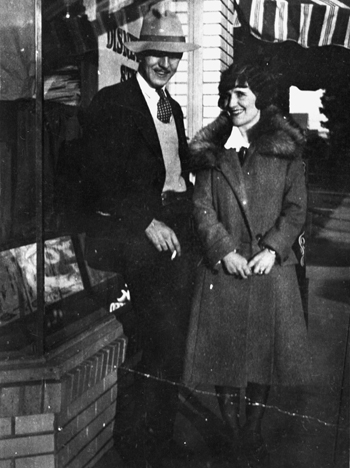 Recently, there has been a lot of information published about women at the Disney Studio, with a fascination that they were involved in more than the traditional ink and paint roles. However, there is one group of women who worked at the Disney Studio that always seem to get slighted or forgotten: the Disney secretaries.

Most secretaries usually get “roses instead of raises,” but I remember my dad telling me to always be nice to secretaries and janitors because “they will either help you get things done or they can prevent things from getting done.” I’ve followed his advice, and often been happily rewarded.

Fortunately, much of Disney history survives because of the skill and attention of the Disney secretaries.

Walt was old-fashioned and a bit paternalistic when it came to his secretaries, but it was obvious that he respected them and gave them a great deal of authority, and actively solicited their opinions on a variety of topics.

Here is the official list of Walt’s secretaries, although I have documentation that others assisted at various times. There were often times when Walt had two secretaries at the same time.

Walt’s first official secretary was Lillian Bounds, whom he would later marry.

“I was not very artistic at all and I was never very good at inking and painting,” Lillian said. “Later, Walt made me his secretary, but I made too many mistakes when he was dictating. He always said I was so bad he had to marry me. They tried to use me as a secretary, but I wasn’t very good at it. So I went back to painting.”

One day when they were working overtime, Walt leaned over the desk as she was taking dictation and kissed her. They married in 1925.

(In an interesting twist, their daughter Sharon later worked for two years at the Disney Studio as a secretary. Employees were suspicious that she was a spy reporting back to Walt, but the one time she made a comment to her dad about what was going on at work, he replied, “You stick to your job and I’ll stick to mine.” Sharon punched a time clock, and Walt would every so often call the Personnel Office to find out if she was goofing off. She was on time every morning and never left early.) 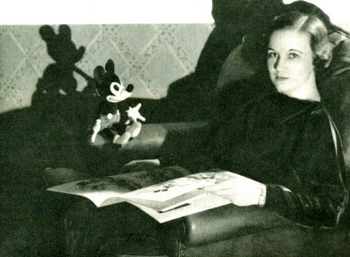 With the popularity of Mickey Mouse and the growth of the Disney Studio, it became necessary for Walt to have a dedicated secretary. Carolyn Schaefer became that person. Among other duties, she edited and distributed the “Mickey Mouse Melodeon,” a newsletter that was the “house organ of the Disney Studios.” It was mimeographed and appeared once a month for several years. She wrote a gossip column under the name of “Clara Cluck.”

Later, she married composer Frank Churchill, who wrote music forSnow White and the Seven Dwarfs and “Who’s Afraid of the Big Bad Wolf?” Walt used the marriage as an excuse to let her go, by stating that there should be “no studio marriages.” That stipulation changed in later years.

Perhaps the most influential secretary was Dolores Voght Scott from Sheridan, Wyoming. Her brother owned the bank in Sheridan. Her grandparents owned the only five-star restaurant in Wyoming, The Copper Kettle, also located in Sheridan.

Dolores started at the Disney Studio in 1930 and became secretary to Roy O. Disney and then later to Walt. She was stationed outside of his office and controlled access to the inner sanctum. For decades, she was the primary “gatekeeper” for anyone wanting to see Walt. She worked for Walt from 1930 until she retired in 1965. 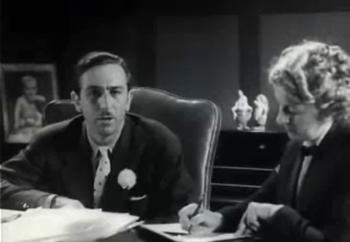 “The Hyperion studio was a fun place to work. Everyone was so young and excited about what was being created. We all worked like dogs, but we enjoyed every minute of it,” she remembered in later years.

Scott had her own office. Walt paid little attention to his own personal bank account, which Scott fortunately supervised. Roy often asked her, “How are Walt’s finances? Don’t let him get involved in some crazy scheme. Let me know if there’s something that doesn’t seem right.”

One day when the burdens got overwhelming Walt told Scott, “Let’s shut down this office. We’ve got Disneyland. We don’t need the studio.”

I’ve often wondered if Dolores Scott’s name was the inspiration for the name of the circus elephant in the Disney cartoons The Big Wash(1948) and Working for Peanuts (1953).

Employees often called Scott to ask if Walt was in a good mood. The Studio password for a bad mood became “Walt’s got his wounded bear suit on.”

Tommie Blount joined his staff in 1958 and Walt referred to her as his “secretary of the exterior.” She was Walt’s personal secretary from 1958 to1966. Walt considered her “sassy” because she would stand up to him.

In 1962, she married Thomas Wilck, who worked in the Studio’s public relations office. Walt gave the bride away and paid for the reception. As he walked Tommie down the aisle of the church, Walt whispered to her, “I didn’t tell Tom how sassy you are.” 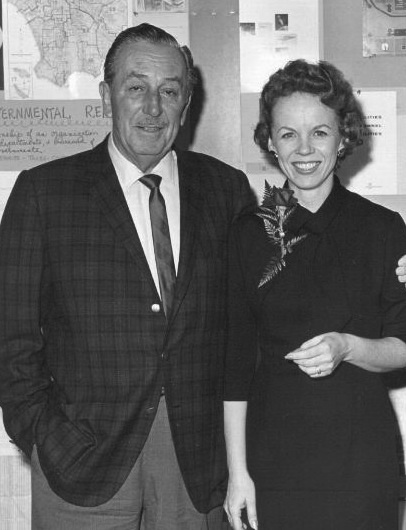 With the retirement of Dolores Scott, Wilck became Walt’s No. 1 secretary. Each evening she prepared a calendar of the following day’s appointments for him. She tried to keep him on schedule, and one day when he continued talking with visitors past the 12:30 p.m. lunchtime, she rang a ship’s bell, a gift from the Coast Guard. Walt was amused, and he instructed her to sound the bell every day at lunchtime.

Wilck learned the best way to get his attention for pending matters was to type the message in all capital letters on three-by-five-inch notepaper. He then wrote his quickly scribbled decisions on the paper in colored ink.

It was Wilck who prepared Walt’s daily end-of-the-workday Scotch Mist drink at 5 p.m. in anticipation of his massage and lower-back treatment from Studio nurse Hazel George.

“The Scotch Mist is mostly ice,” Wilck remembered. “I would put ice and water in it and then float the scotch on top and not give him very much of it. He may have consumed a lot of liquid but I don’t think he really got much liquor.”

Walt had first considered actress Bette Davis for the role of Mary Poppins, since the original book portrayed the character as a middle-aged woman. It was Wilck who suggested Julie Andrews, who was then appearing on Broadway in Camelot, so Walt went and took a look—and the rest is history.

One of Wilck’s duties was to call Walt’s house every night to let their housekeeper Thelma know that he was one his way home. One particular night she forgot, and didn’t call. When Walt showed up, Thelma said, “What are you doing here? Tommie didn’t call.” Lillian said the same thing.

Walt picked up his hat and stormed back out the door yelling, “That’s a hell of a greeting when you get home.”

When Scott retired in 1965, Lucille Martin came aboard as Walt’s second secretary. She began her Disney career in the steno pool. Later, she served as Ron Miller’s executive secretary and Michael Eisner’s administrative assistant. She was named a vice president and special assistant to the board of directors in 1995.

Although she only briefly worked with Walt, she had fond memories of him.

Finally, Walt drew a little cartoon caricature of Lucille with curly hair and walking with a big sign that said “Down with SIR” — “I had it taped on my intercom until the day he died,” she said.

“Shortly before he went into the hospital at the end of the workday, Walt sat talking to Tommie and me about CalArts and EPCOT,” she said. “Walt was unusually tired as he got up and said, ‘Sometimes I just feel like chucking it all.’ Then he looked over at me and said, ‘But Lucille and her girls need me.’ ‘That we do,’ I said, and Walt smiled. I’ve always cherished his saying that.”

JIM KORKIS is an internationally-respected Disney Historian who has written hundreds of article and done hundreds of presentations on all things Disney for more than thirty years. He is the author of the acclaimed new book The Vault of Walt. His extensive expertise and knowledge, particularly in previously-unexplored areas of Disney history, has been utilized by many other researchers as well as The Walt Disney Company. He will be hosting a special presentation at The Walt Disney Family Museum on July 23.

THE VAULT OF WALT is a highly-praised, recently-published book, featuring more than 450 pages of previously untold stories about Walt Disney, the Disney theme parks, the Disney films, as well as many out-of-the-ordinary and forgotten stories of Disney history. The Vault of Walt is both a valuable supplement to any Disney fan’s personal library and an entertaining introduction to the many worlds of Walt. It features a foreword by Diane Disney Miller, who praises the writing as “honest, and well written…so authentic, so true to my dad’s spirit, so unprejudiced and non-judgmental that as I read it I could see the twinkle in dad’s eye, hear his laugh.”