THE FAUNTELROY FOLLIES: The Continuing History of Donald Duck

In light of the Donald Duck Contest we held last month, Disney Historian Paul Anderson has uncovered new information about our favorite duck's middle name that will have you quacking "Oh boy, oh boy, oh boy!" 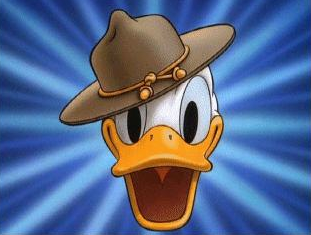 May I be the first to congratulate all the Trivia Scholars that successfully answered the three Donald Duck questions. I think Donald’s middle name is one of the perennial Top Ten Disney trivia questions of all time, as it routinely shows up in contests (for many decades now). All I can surmise from this is that there must be a great deal of interest in the fine-feathered fowl’s middle name.

As a Disney historian, I wanted to share a little bit about the origins of the name as well as a previously unpublished and unknown anecdote. Yes, this is not your dad’s Walt Disney history, this is brand new, breaking news right here and now on Storyboard (alert the media!).

As you glorious, gifted masters of minutiae winners know, the answer to this trivia question comes from the short film Donald Gets Drafted (1942). It is in this cinematic achievement that we first see the name “Fauntleroy” as it is manifest on Donald’s Order to Report for Induction. It has always been suggested that the name had its origins from the 1886 book Little Lord Fauntleroy by Frances Hodgson Burnett. A Fauntelroy garment often consisted of a sailor suit and hat, and Little Lord Fauntleroy himself was a well-known spoiled brat (does this sound like somebody we know?). 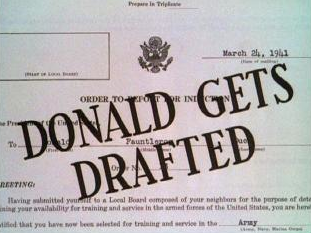 I recently came across a story transcript from the film Donald Gets Drafted from April 9, 1941. In attendance at this meeting were Walt Disney and a handful of storymen. Early on in the discussion Walt comes up with the idea of zooming in on Donald’s draft notice and showing the particulars.  Walt declares: “Could we come down on this draft paper and it says ...” And now, here, for the first time, we hear Walt’s idea for Donald’s middle name ... (drum roll please), it is “something funny.” Okay, I know, that’s not funny. It’s not a name, but Walt throwing out a suggestion to his storymen. Storyman Harry Reeves states that it should be “Donald Swansdown Duck,” to which Walt replies, “it ought to be some dopey, silly name.” And there it is left. So now you know, the very first ever incarnation of Donald’s middle name is: Swansdown! It is just one more, small piece of Donald S. Duck’s celebrated history.

Of particular interest to Donald Duck fans, is that also present at the story meeting was Carl Barks, who, of course, became Donald Duck’s best pal and champion (along with Clarence “Ducky” Nash and Tony Anselmo!). Carl did not suggest a middle moniker for Donald, which is unusual because he was legendary when it came to creative and imaginative character names for his comic book stories. So making the leap of faith that Walt’s storymen were well known for stashing unused ideas for future use, and Carl was in the meeting, we discover that Barks  did just that! In his Donald Duck story for the April 1946 issue of Walt Disney Comics and Stories #67, we find a flirtatious Donald with a “Miss Swansdown-Swoonsudden.” Coincidence? I think so! But a cool story, nonetheless!

Congratulations to Jessica Peterson who was drawn at random to win a personal audio birthday message from Tony Anselmo. A round of applause to all who participated in the contest and knew that Donald's birthday was June 9, 1934, Clarence Nash was the first person to voice The Duck, and Donald's middle name is indeed Fauntleroy!