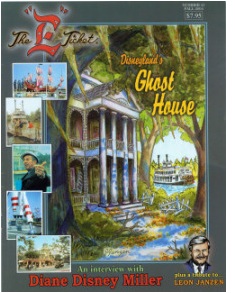 As many fans of Walt Disney and Disneyland know, The "E" Ticket was a magazine devoted to "collecting theme park memories". While the magazine is no longer published, it lives on in the hearts of its many devoted fans. Now, thanks to Diane Disney Miller, her family and the staff of the Museum, you have the chance to own a piece of this amazing history.

But first, a bit of the back story:

Leon and Jack Janzen grew up in Southern California during the golden era of the 1950s and 1960s. Back then, Southern California was awash in various theme parks from the mountains to the sea. The two brothers made a habit of visiting various parks as they were growing up, and as they got older the love they had for those salad days of boyhood and escapism moved them to create The "E" Ticket, a fanzine devoted to their favorite childhood destination, Disneyland. In the winter of 1986, the first issue was published. Their intent was to provide not only a detailed history of their favorite park but to also spotlight the “artists, Imagineers and other creative individuals who helped design and build Disneyland”.

In the days before the Internet, Google, and the ability to discover history with the stroke of key, The "E" Ticket provided a magical behind-the scenes peek into the Disneyland that Walt had imagined. 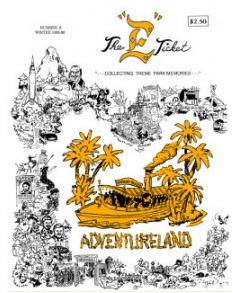 The magazine was a mix of drawings, photos, and images, some of which hadn’t been seen since those early years of the park. The brothers were quickly befriended by retired artists and Imagineers. With each issue being devoted to a particular land or ride. Jack and Leon researched each article and provided memories of their own from their childhood adventures at the “Happiest Place on Earth.”

They conducted audio interviews with well-known craftsmen and those not-so-well-known, preserving in some cases the stories and memories of a generation of craftsmen who had helped Walt Disney realize his dream. Early issues of The "E" Ticket were not just devoted to the early history of Disneyland, but Jack and Leon also wrote about other Southern California landmarks such as Marineland, Pacific Ocean Park, Corriganville, and others that have long since vanished from our landscape. These early issues quickly went out of print and became collectors’ items. The "E" Ticket was published two to three times a year for the next 17 years. 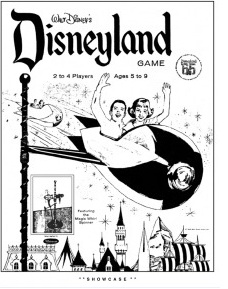 As the membership grew, the small newsletter-like quality of the original issues evolved into a color, glossy publication but the brothers never lost the quality of the stories and the histories they were telling. Bob Gurr, Yale Gracey, Marc Davis, and many other Imagineers and behind-the-scenes personalities all contributed to the magazine.

The love Leon and Jack felt for the Disneyland of their childhood came through in each issue. According to the Internet Archive, the magazine went online in the mid-1990s and the website was upgraded every few years. In addition, the website offered a gallery of poster images and other rare images such as the postcard book from Adventure in Inner Space, as well as a complete index of all the issues they had published.

Due to demand for the out-of-print early issues, they created a CD-Rom highlighting those early issues and the two annuals they produced in the early days of the magazine. Over the years, it would grow into a three CD-Rom collection. Unfortunately, in 2003 Leon Janzen died. The loss hit Jack Janzen hard, and it was almost a year before another issue was released.

In 2008, Jack Janzen announced that the “end of the line for the magazine was in sight”. In the summer of 2009 he published the final issue, #46, highlighting the Indiana Jones ride. On August 7, 2009, Jack invited his readers to join him and special guests Bob Gurr, Alice Davis, Ed Squair, Dave Smith, Tony Baxter and others for “one last ride”. The gathering was held at the carousel at Griffith Park where guests got to ride the “horses” all evening long and sit on one of the benches that Walt had sat on while watching his daughters go round and round. It was there, legend has it, that Walt began to think about Disneyland.

On December 31, 2009, Jack announced that he was retiring and that the end had indeed arrived for his magazine. He said goodbye to his readers but left them with good news: The Walt Disney Family Museum had acquired all the assets of the magazine.

So, come visit us at the Museum and be sure to stop in at our Store to check out the colorful display for The "E" Ticket. It's a golden opportunity to begin collecting or to add to your already existing collection. In addition to the single issues, The Store also carries all three CD-Roms chronicling the first 24 issues, all in mint condition. The "E" Ticket is also now available in our online store.