As Spring Break approaches, The Disneyland Resort bursts into a colorful floral wonderland rivaling any botanical garden. In between stopping to smell the roses, many guests will enjoy the classic attractions and experiences to be found in Walt Disney’s Original Magic Kingdom, Disneyland. We at The Walt Disney Family Museum would like to highlight some of the must see Disneyland attractions that guests can still experience today that tie directly back to Walt Disney himself.

So with no further ado we present:

Disneyland - The Quintessential Classics
The Must See Attractions that made Walt Disney's Magic Kingdom
Internationally known as "The Happiest Place on Earth"! 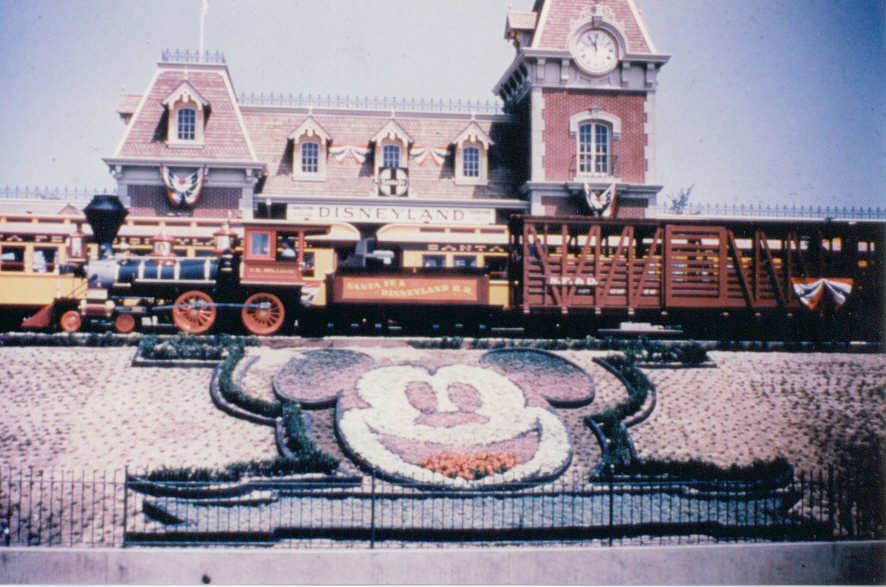 As we continue our tour of Disneyland’s Quintessential Classics, let’s pause for a moment in front of the Main Street Railroad Station to talk about the most famous mouse in the world – the one and only Mickey Mouse - and his presence at the Happiest Place on Earth! Behind us is the famous Floral Mickey, a welcoming face that has been greeting Disneyland visitors since opening day in 1955. The public’s desire to meet Mickey in person was one of the many factors that shaped Walt Disney’s ideas for creating Disneyland. As Mickey’s popularity soared in the 1930’s, the Disney Studio was flooded with requests by children from all over the country wanting to come and see the place where Mickey Mouse lived. Walt knew that visitors to the studio would be disappointed, finding an animation factory full of hard working artists, rather than a Fantasyland of his famous characters. “You know, it’s a shame people come to Hollywood and find there’s nothing to see," Walt said. "Even the people who come to the Studio, what do they see? A bunch of guys bending over drawings. Wouldn’t it be nice if people could come to Hollywood and see something?” By the summer of 1948, Walt had decided to create that “something”, a small park on an eight acre plot of unused land across the street from the Studio called “Mickey Mouse Park”. Children would finally have the opportunity to have their pictures taken with full sized statues of Mickey Mouse and the other Disney characters. Imagineering Legend John Hench remembered, “It was back in the 1940s, I lived on Riverside Drive in Burbank, quite near the studio. I remember several Sundays seeing Walt across the street in a weed-filled lot, standing, visualizing, all by himself. The longer Walt thought about the park, the more ideas he got, and suddenly the weed-filled lot wasn’t big enough.” Many of Walt’s initial ideas for “Mickey Mouse Park” (like a village with town hall and bandstand, a Wild West town with a saloon-style theater and a steam train ride) formed the basis for what became the Magic Kingdom of Disneyland.

Mickey of course was on hand for Disneyland’s opening day in the form of a crude character costume borrowed from the Ice Capades. He’s been here every day since, acting as the Official Host, welcoming Walt’s guests with a smile and a hug.  A slightly revised version of the “Ice Capades Mickey” would continue to greet guests at the entrance of the Park until 1961, when Walt, who was never pleased with Mickey’s appearance, turned to Animator Bill Justice to design the first true Disney character costumes. Walt knew that the chance to meet the Disney characters was one of the highlights that set Disneyland apart from any other amusement enterprise. Walt told Bill, "Other places can have thrill rides and bands and trains. Only we have our characters." Walt continued to strive for a better character costume design and had Bill revamp the Mickey costume once more in 1962 to feature movable arms and a more proportioned head to body ratio. This new and improved Official Host of Disneyland even traveled to New York City in 1962 to appear live on stage in a special Radio City Music Hall show entitled Disneyland, U.S.A. In August of 1966, Mickey was on hand for the last professional photo taken of Walt at Disneyland. A smiling Walt was forever captured on film with his lifelong partner at his side in front of the Sleeping Beauty Castle, three short months before his untimely passing. 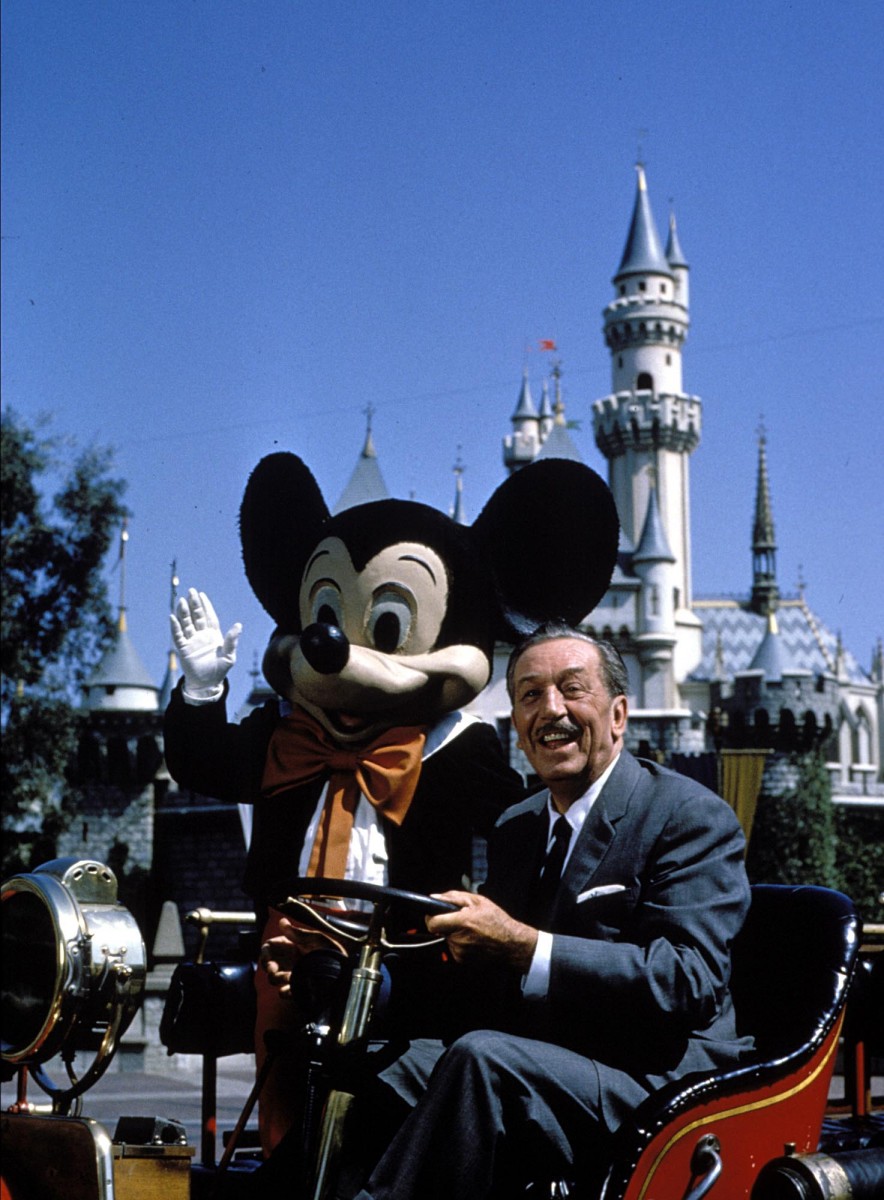 Those who knew Walt Disney, the man, would frequently comment on how much of Walt there was in Mickey’s personality. Walt’s widow Lillian Disney said that “Whenever I see Mickey Mouse I have to cry. Because he reminds me so much of Walt.” Disney Legend John Hench recalled that at the dedication ceremony for Walt Disney World, “Roy Disney stood facing the microphone before a crowd of guests ready to deliver the dedication speech at the opening ceremony. He suddenly turned and looked around, and I heard him say quietly, ‘Somebody go find Mickey for me. We don't have Walt any more, and Mickey is the nearest thing to Walt that we have left.’ Mickey appeared and Roy promptly began his speech, with Mickey standing proudly at his side.” Disney Animation Legend Frank Thomas would simply sum up this sentiment with his statement, “Mickey was Walt, and Walt was Mickey.” So today, when you see Mickey in the Park, know that a part of Walt is still here, welcoming each of us to his Magic Kingdom. 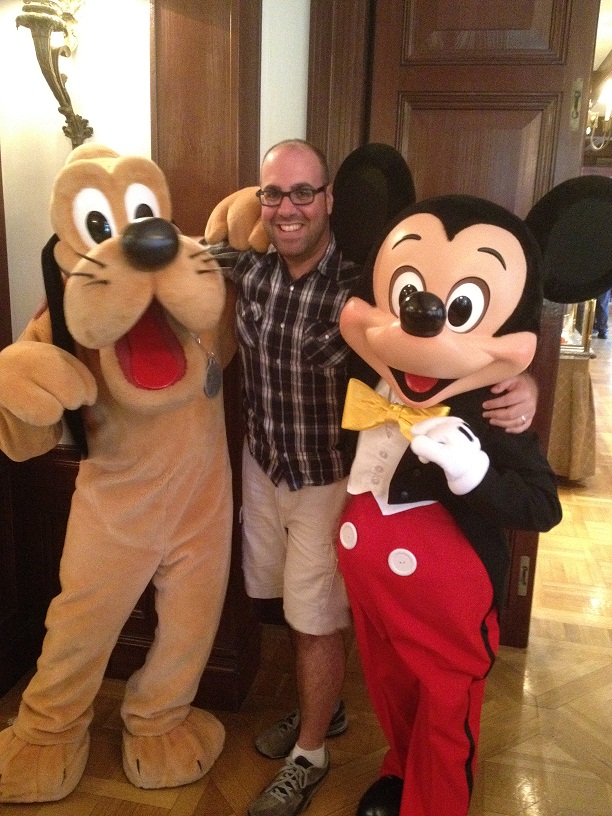 Joseph Titizian (pictured on the left with Pluto and Mickey in Club 33) is an inaugural member of The Walt Disney Family Museum volunteer team. He is a regular contributor to this blog, and has developed continued education courses for the volunteer team. A lifelong Disney fan, Joseph has previously worked at Disneyland Park and Pixar Animation Studios.