Behind the Scenes: So Dear To My Heart

Our Film of the Month for September is So Dear To My Heart, a rarely-screened feature that was a personal favorite of Walt Disney, since it re-created on film one of the most memorable times of his life, growing up on a small farm in the American Midwest at the turn of the Twentieth Century. Walt said: “So Dear was especially close to me. Why, that’s the life my brother and I grew up with as kids out in Missouri.” Author, historian, and friend of The Walt Disney Family Museum shares some behind-the-scenes stories of the making of our Film of the Month. 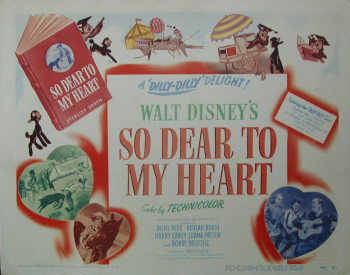 Based on the acclaimed 1943 novel Midnight and Jeremiah by American author Sterling North, So Dear To My Heart takes place in the fictional Fulton Corners, Indiana in 1903. A young boy named Jeremiah Kincaid (portrayed by Bobby Driscoll, who had just finished filming Song of the South) adopts a mischievous black lamb named Danny (named after Dan Patch). Jeremiah struggles to earn enough money as well as train Danny so that the lamb can be entered into competition at the Pike County Fair. Of course, there are some tough challenges along the way that help Jeremiah grow as a person as well as a surprising but satisfying ending.

Walt had intended that this would be the first all live-action Disney feature film, but his distributor, RKO, convinced him that when audiences saw the word “Disney,” they expected animation.

“I saw the cartoon characters as figments of a small boy’s imagination, and I think they were justified,” said Walt in a later interview. The animation, narrated by Professor Owl, was used to teach the young boy some important lessons, including “it’s what you do with what you’ve got.”

Disney legend Hamilton Luske was the supervising director of the animation that, according to the press book, amounted to only fifteen percent of the total footage of the film. Art direction for the film was done by Mary Blair, John Hench, and Dick Kelsey. Many of Blair’s concept paintings, done in a primitive quilt-inspired pattern, still exist; and there is a strong connection between these drawings and the designs of the completed film, such as the appearance of the Grundy store.

Walt Disney was fond of the film My Friend Flicka (1943), directed by Harold Schuster. In fact, Walt’s wife and daughters loved the film so much that they ran it many times in their home theater. Under contract to 20th Century-Fox, Schuster was loaned to the Disney Studios to direct the live action for So Dear To My Heart.

Filming began on April 30, 1946. Initial filming went into late summer, so the landscape had started to dry up. Every night twenty-seven greens men watered the soil and plants so they would look fresh and green for the next day’s shooting. Temperatures exceeded a hundred degrees and while the cast and extras suffered in their heavily layered period costumes, cool air was pumped into the animal paddocks.

The movie was filmed, according to the official press book, around the homes and farms “amidst the grain fields, the orchards and vineyards, the alfalfa pastures, the cattle corral under the great spreading elms near Tulare, Visalia and Porterville” in the San Joaquin Valley about 250 miles north of Hollywood and some photography done in Sequoia National Park.

Unusually, some interior sets like the Grundy store were actually built on location since the Disney Studio at the time had only one small sound stage. Schuster told noted film historian Leonard Maltin, “They found an old, and I mean old, hardware store near the town of Porterville. It was closed, and the various wares inside were bought lock, stock and barrel and moved into the Grundy store. Both the barn and Granny’s house were built on the location.”

Close to five hundred local residents gathered daily at the set to perform as background extras. They dressed in the period clothes of their forbears, providing the familiar farm chores and animals and the behavior of farmers at their fairs and picnics half a century earlier.

“Come One! Come All! To the Walt Disney County Fair! Filled with music, laughter and heartwarming drama!” proclaimed the theatrical poster for the film, as So Dear to My Heart was released nationwide on January 19, 1949—a sentimental snapshot of a bygone period close to the heart of Walt Disney. 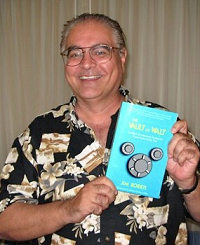 JIM KORKIS is an internationally-respected Disney Historian who has written hundreds of articles and done hundreds of presentations on all things Disney for more than thirty years. He is the author of the acclaimed new book The Vault of Walt. His extensive expertise and knowledge, particularly in previously-unexplored areas of Disney history, has been utilized by many other researchers as well as The Walt Disney Company.

So Dear to My Heart screens daily through September at 1pm & 4pm (except Tuesdays, and September 17 and 24). Tickets are available at the Reception and Member Service Desk at The Walt Disney Family Museum, or online at www.waltdisney.org.