February is Awards Season, and The Walt Disney Family Museum is celebrating, with film presentations and visitor programs throughout the month. Walt personally won 32 Academy Awards® throughout his career. To this day, Walt still holds the record for the most Oscars® won by an individual, and there is only one place where you can get an up-close look at more than 20 of the famous statuettes—The Walt Disney Family Museum. Disney historian and author Jim Korkis has penned this excellent article about Walt and the Oscars, exclusively forStoryboard.

Even decades after his passing, Walt Disney still retains the honor of being the individual with the most Academy Award nominations and the most Oscar wins. While the listing of these awards for animation, live action and more is very impressive, it is fun to take a quick look behind some of the stories of those golden statuettes. 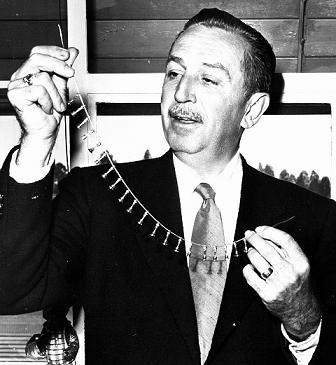 OSCAR BRACELET. The largest single collection of Oscars outside Hollywood is at The Walt Disney Family Museum in San Francisco. In the early Sixties, Walt had a very special bracelet fashioned with twenty miniature Oscar statuettes, each of which was engraved underneath with the name of the film for which it was awarded. Made of 18K gold, Walt envisioned having a necklace made with these charms given to him by the Academy; but Lilly said she’d prefer a bracelet. After the piece was constructed, Lilly wore it often, and with great pride. It is now on display in Gallery 7 of the Museum.

After receiving his fourth Oscar that evening, Walt told the audience, “Just gotta say one more word. It’s wonderful, but I think it’s my year to retire!”

As Walt’s niece, Patty, remembered, “Tom Jones, a Studio publicist, was assigned to take Walt to the Academy Awards one year. Walt told (his wife) Lilly not to bother coming to the event because he didn’t think he was going to win anything. So Walt went to the Awards and got so many that the press took photos of him holding all these Oscars. When Tom drove Walt home, Lilly wouldn’t let him in the house because she was so mad that he told her to stay home. She was furious because it had been a big night and she wasn’t with him. So Tom had to drive Walt back to the Studio and he (Walt) had to sleep in his apartment at the Studio that night.”

THREE LITTLE PIGS. We can thank Walt every time we respectfully use the name “Oscar” to refer to the Academy Award, even though he didn’t invent that nickname. At the 1934 ceremony, Walt received an Oscar for the animated short Three Little Pigs (which had gotten more than eighty percent of the Academy votes for the honor).

It was the first award given that evening. Walt came up to the podium with his head covered in bandages, because he had been injured in a polo match with Will Rogers—the Oscar Emcee that night. Screenwriter Frances Marion recalled, “Those who had never won the gold-plated honor referred to it disparagingly as the ‘Oscar.’ But when Walt referred to the ‘Oscar’ in his speech, that name took on a different meaning, now that we had heard it spoken with sincere appreciation.”

THE THALBERG AWARD. The Irving G. Thalberg Memorial Award is awarded to “Creative producers, whose bodies of work reflect a consistently high quality of motion picture production.” The award was named for Irving Thalberg, legendary vice president and head of the Production Division of Metro-Goldwyn-Mayer, who was responsible for developing MGM’s top productions. The award is not given every year.

The trophy is in the form of a bust of Thalberg attached to a rectangular base but is still considered as an “honorary Oscar.” Walt Disney was the youngest ever to win it.

Producer David O. Selznick presented Walt with the award. Walt was so overcome with emotion that he openly wept. According to the trade newspaper Daily Variety(from a February 27, 1942 story headlined “Walt Disney Weeps as He Gets Oscar”) “(Walt) found it difficult to speak and was only able to say with great emotion: ‘I want to thank everybody here. This is a vote of confidence from the whole industry.’”

Actress Norma Shearer, Thalberg’s widow, went over to Walt when he returned to his seat and gave him a little kiss.

WALT DISNEY, OSCAR PRESENTER. Walt Disney was a presenter at the Academy Awards three times. In 1937, he presented the Short Subjects awards, giving the animation one to himself. In 1943, he presented the Thalberg Award to Producer Sidney Franklin.

On March 19, 1953, Walt Disney presented the music awards at the 25th Academy Awards, held at the RKO Pantages Theatre in Hollywood and the first ceremony to be televised.

Host Bob Hope introduced Walt: “You know when we called Walt Disney and asked him to present the music award tonight, we said, ‘Walt with all the songs you’ve commissioned for your pictures and what with Fantasia and all, you would be the right man to do it. After all, think about how much you have done for music and Hollywood.’

“And his warm reply was ‘I would have thought it was the other way around’. In any case Walt fought his way through all the Oscars in his living room to our stage tonight. One of the great theatrical inventors of modern times, Mr. Walt Disney.”

An ill-at-ease Walt mangled several of the names of the nominees. Miklos Rosza became “Miklos Rosca.” (Orchestra conductor Adolph Deutsch tried to loudly whisper to Walt the correct pronunciations from the orchestra pit but it didn’t help.) Walt changed the song title “Am I in Love?” to “I Am in Love!” and couldn’t make it all the way through Dimitri Tiomkin’s name. However, the highlight was when Alfred Newman, who won for Best Scoring of a Musical Picture, walked away from the podium, leaving his Oscar behind. 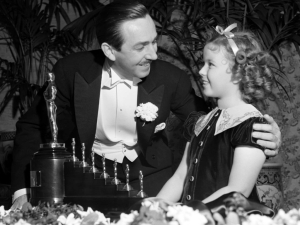 SNOW WHITE OSCAR. One of the most impressive Oscars housed in the collection at The Walt Disney Family Museum is the honorary one that Walt Disney received on the night of February 23, 1939.

Snow White and the Seven Dwarfs was the top-grossing film of all time at that point, and was universally lauded. The Oscar was given for Snow White’s“significant screen innovation which has charmed millions and pioneered a great new entertainment field for the motion picture cartoon.

According to his autobiography, Academy President (and legendary film director) Frank Capra was the one who came up with the idea of a special award of a full sized Oscar statuette with seven smaller ones descending in a row. Even though Walt was adamant that he didn’t make films just for children but for the entire family, it was felt that little Shirley Temple (who was the top child star of the time), representing all of Walt’s young fans, should make the presentation.

However, Shirley Temple Black admitted decades later to Animation Historian John Culhane that she was a little uncomfortable that night.

SEAL ISLAND. Even in the Forties, Walt was worried about the vanishing frontier. So he had a husband and wife photography team, Alfred and Elma Milotte, go to one of the last remaining wildernesses, Alaska, and shoot footage of seals.

The resulting film, the first of the True-Life Adventure Series, did not appeal to RKO, Disney’s film distributor at the time, who felt audiences would not sit still for a nature film. In addition, they felt the Disney name was so closely connected to animation that the small audiences that might show up would be disappointed seeing live animals.

Walt asked a friend who ran Pasadena’s Crown Theater to show Seal Island for one week in December of 1948. In that way, this nature film would then qualify for consideration of an Academy Award nomination.

Though it was twenty-seven minutes long which was much longer than the usual short subject at the time, Seal Island was not only nominated but won that year’s Best Documentary Oscar. The very next day, Walt took that Academy Award to his brother Roy O. Disney’s office and said, “Here, Roy. Take this over to RKO and bang them over the head with it.”

Confronted with the impressive Oscar, RKO distributed the film.

THE AWARD SHOW THAT NEVER WAS. In the Sixties, a delegation from The Academy of Motion Picture Arts and Sciences was unhappy with the previous year’s television show. They came to the Disney Studio for lunch, trying to convince Walt to produce the next Oscar telecast.

According to author Bob Thomas in his book Walt Disney: An American Original, Walt replied, “Look, we live out here in the cornfield. All these years we’ve been turning out corny entertainment. I’ve never considered myself a big producer like Louis B. Mayer or Darryl F. Zanuck. I’m not in their class. I don’t think our organization is cut out to make the kind of sophisticated entertainment that an Oscar show should be. And I think the public would resent it if I turned it into a Disney production. No, I think you’d better find someone else to put the show on for you.”

Jim Korkis is an internationally-respected Disney Historian who has written hundreds of article and done hundreds of presentations on all things Disney for more than thirty years. He is the author of the acclaimed new book The Vault of Walt. His extensive expertise and knowledge, particularly in previously unexplored areas of Disney history, has been utilized by many other researchers as well as The Walt Disney Company.

On Saturday February 18, the special program And the Award Goes to...Walt Disney offers a one-of-a-kind showcase of Walt Disney’s Award Winners. Hosted by author, Disney historian and friend of the Museum Jeff Kurtti, this program offers a look at highlights of Walt Disney’s Oscar-winning films, including rarities such as Parade of the Award Nominees (1932), Ferdinand the Bull (1938), and Grand Canyon(1958); as well as trailers and rare footage and photos of Walt at the Oscar Ceremonies. (Separate admission required.)

Film programs through February change weekly, with screenings daily at 1:00pm and 4:00pm (except Tuesdays, and February 18, 25 and 26). Further program information and tickets are available at the Reception and Member Service Desk at the museum, or online by clicking here.

The Oscar statuette is the copyrighted property of the Academy of Motion Picture Arts and Sciences, and the statuette and the phrases “Academy Award(s)” and “Oscar(s)” are registered trademarks.