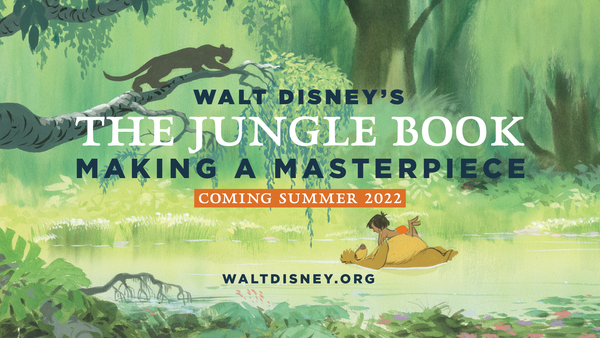 The exhibition will explore the creative complexities behind the making of The Jungle Book (1967), including the unique personalities of each character and their voice actor counterparts, the rich artwork and use of cutting-edge animation techniques, the memorable soundtrack of original songs by the Sherman Brothers and Terry Gilkyson, the impact of Walt’s passing during production, and the film’s enduring popularity and influence decades after its initial release.

“The first Disney film I ever saw as a kid was The Jungle Book, and it immediately changed my life. I was overcome with sheer joy by the world of drawings and paintings, songs and characters that came alive in front of me. That awe-inspiring magic I experienced never left me—it sent me on my quest to become a Disney animator,” says guest curator, Andreas Deja. “It is an honor of a lifetime to work with the staff of The Walt Disney Family Museum on such an extensive and important exhibition. I believe visitors will be delighted by the beauty of this animated masterpiece and fascinated by the details of its unique production process.”

In the early 1960s, after finishing his work on The Sword in the Stone (1963), story artist Bill Peet brought Rudyard Kipling’s 1894 children’s novel The Jungle Book to Walt Disney’s attention, proposing it as the their 19th animated feature film. By 1962, Peet and the Studios’ Animation Department had already written an early treatment for The Jungle Book, established initial character designs, and devised a rough idea for the iconic song “The Bare Necessities.” However, multiple complications arose throughout the making of the film that threatened to shut down production altogether—most notably, how to faithfully adapt Kipling’s collection of stories. Dissatisfied with the dark and dramatic tone that had initially been developed, Walt insisted on distancing the animated production from the original source material and creating a lighter musical-comedy aimed at the family demographic. Despite these early disagreements and challenges, as well as Walt’s passing in 1966, the film was completed and released in 1967—the last animated feature that Walt personally oversaw—to enormous worldwide success.

The Jungle Book ultimately reinvigorated the confidence and determination of The Walt Disney Studios, inspiring its leaders, staff, and artists to continue to entertain audiences through the production of animated films without Walt, while continuing to pay tribute to his life and legacy.

Over 300 rare artworks and ephemera will be on view throughout this immersive special exhibition, including original animation drawings and cels on loan from animation enthusiast and collector Mike Glad, retired Disney Creative Director and animator David Pacheco, and Deja’s own collection. An array of maquettes, model sheets, pencil tests, story sketches, concept art, behind-the-scenes photos and documents, American and international movie posters, and merchandise will also be on display, as well as archival film clips and interviews.

To enhance their experience, younger visitors and the young-at-heart will also be invited to immerse themselves further in the exhibition through in-gallery interactive elements and engaging wildlife and film-themed activities.

“As always, it has been an absolute pleasure to collaborate with Andreas Deja. His first curatorial project for the museum was in 2014 with the original exhibition, Leading Ladies and Femme Fatales: The Art of Marc Davis. In 2019, his second curatorial project and major special exhibition, Mickey Mouse: From Walt to the World, attracted a record number of visitors,” says Kirsten Komoroske, Executive Director of The Walt Disney Family Museum. “We are honored and humbled to continue this dynamic partnership and friendship with Andreas and, in this stunning and informative exhibition, to highlight some never-before-seen works from his own personal collection.”

Running concurrently with this exhibition, The Walt Disney Family Museum is also honored to present its first Cause Awareness exhibition, Creative Conservation: The Art of Endangered Animals. In partnership with five wildlife sanctuaries located around the world, this exhibition features abstract and pawprint creations by rescued and rehabilitated animals, including panthers, tigers, vultures, chimps, and bears, complemented by watercolor wildlife paintings by Andreas Deja. All artworks will be available to purchase through the museum’s website, with proceeds supporting the wildlife sanctuaries and their important work. Creative Conservation will open to the public on Friday, April 22 in the museum’s Lower Lobby and Theater Gallery, and is free to view for all museum ticketholders.

Walt Disney’s The Jungle Book: Making a Masterpiece will be on display in the Diane Disney Miller Exhibition Hall from Thursday, June 23, 2022 through Sunday, January 8, 2023. Ticket reservation details will be available soon at waltdisney.org/jungle-book.