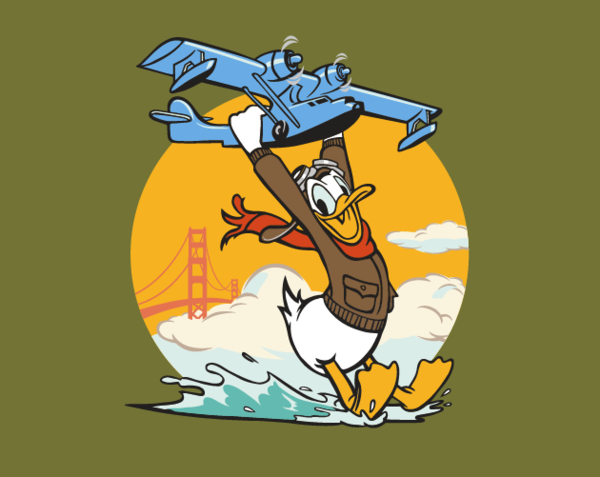 San Francisco, March 11, 2021—The Walt Disney Family Museum is pleased to announce the opening of its new special exhibition, The Walt Disney Studios and World War II, on Thursday, March 18 for museum members and to the general public the following day, on Friday, March 19, 2021. The exhibition will be on view in the Diane Disney Miller Exhibition Hall at 122 Riley Avenue through January 10, 2022.

To accommodate guests safely and to ensure proper distancing, the museum requires all guests—including members—to reserve tickets prior to their visit. Admission will be available on a timed-ticket basis with limited capacities set for each time slot. Tickets will be released in short-term increments to ensure availability.

The museum’s updated operating hours will be Thursday through Sunday from 10am to 5pm, with last gallery entry at 4pm. The Museum Store will also open to members only on March 18 and to the public from March 19. Guests are invited to view waltdisney.org/welcome-back for full reopening details.

With the exception of the Museum Store, the Main Museum at 104 Montgomery Street, which showcases galleries telling the story of the life of Walt Disney, will remain temporarily closed with an anticipated opening in April 2021. Media announcement and a Main Museum reopening date will be forthcoming.

When Walt Disney received word that the Disney studio lot in Burbank had been requisitioned as an Army antiaircraft base after the bombing of Pearl Harbor in 1941, he and his staff pledged to support the war effort without hesitation, and without profit. This original exhibition illustrates how the The Walt Disney Studios devoted over 90% of its wartime output to producing training, propaganda, entertainment, and public-service films, publicity and print campaigns, and over 1,200 insignia, while also deploying a group of talented artists, including Walt himself, to Latin America on a Goodwill Tour.

“The museum is humbled and honored to mount the first major exhibition to explore in depth The Walt Disney Studios’ involvement in the Second World War effort,” says Kirsten Komoroske, Executive Director of The Walt Disney Family Museum. “This rarely-shared period in the Studios’ history offers insight into the creativity, innovation, and positivity that Walt and his team brought to the military leaders, troops, and civilians at home and abroad.”

During this unique era of animation history, The Walt Disney Studios functioned as a tremendous morale-builder for both the civilian public and deployed Allied troops. Walt knew that cartoons would be an ideal medium for communicating with the American people—in an amusing, uncomplicated manner—about war-related issues and anxieties. In addition to the short films and military insignia being produced, Disney characters appeared in a variety of homefront initiatives, from advertisements, magazines, and stamp books, to government posters promoting tax payment, food recycling, rationing, war bond sales, and farm production. This exhibition includes 550 examples of these rare, historical objects and film clips.

“I have a special interest in this exhibition because Disney’s insignia design team created two clever insignias for my uncle’s photo reconnaissance group. Unfortunately, my uncle was shot down and killed one month before the war ended in Europe, and for me, this exhibition serves as salute to his supreme sacrifice,” explains Ramsey. “Both The Walt Disney Family Museum and The Walt Disney Company have been a delight to work with in creating this exhibition.”

As the anchor attraction in the Presidio of San Francisco, The Walt Disney Family Museum is an ideal location for The Walt Disney Studios and World War II. The Presidio served as an active U.S. Army base from 1846 until 1994, when it was decommissioned and designated a National Park. Constructed in 1897, the main museum building is one of five prominent brick Army barracks on the Main Parade Ground. The museum also occupies a second brick building, built in 1908, which served as a combination gymnasium and post exchange, and now houses the Diane Disney Miller Exhibition Hall.

Commemorating the 75th anniversary of the end of World War II, The Walt Disney Studios and World War II will be on display in the Diane Disney Miller Exhibition Hall. A new insignia designed exclusively for this exhibition by Mike Gabriel features Donald Duck dressed as a pilot holding onto the wings of a Consolidated PBY Catalina flying boat while soaring over the Golden Gate Bridge. This boat was commonly seen in the San Francisco Bay during World War II.

The Walt Disney Family Museum is honored to provide free admission to the museum and this exhibition year-round for active and retired military personnel, and their spouses and dependents with valid ID.