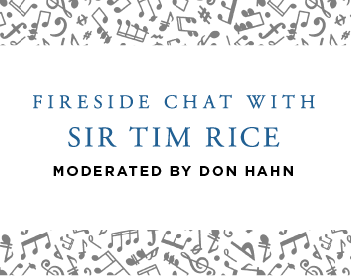 In an special, virtual conversation, Sir Rice and Hahn will discuss the beginnings of Rice’s inspiring career, his illustrious partnership with Andrew Lloyd Webber, and their own personal experiences collaborating on such classic Disney films as The Lion King (1994 and 2019) and Beauty and the Beast (1994 and 2017). Our special guest performers will then present their individual renditions of some of Sir Rice’s most celebrated works.

This event will not only pay tribute to Sir Rice’s remarkable accomplishments, but it will also benefit The Walt Disney Family Museum’s education initiatives, including the Animation Academy Certificate Program for At-Promise students. More information about the event and how to purchase tickets are available at waltdisney.org/STR.

Fireside Chat with Sir Tim Rice, Moderated by Don Hahn will be streamed from 5–6:30pm PT on December 5, 2021. The virtual fundraiser will be presented as two versions. The first is a paid VIP Experience featuring the full length conversation between Sir Rice and Hahn, an extended medley of performances, and a special toast to Walt Disney’s birthday.

In the second version, guests can tune into a free program featuring highlights from Sir Rice and Hahn’s discussion and a selection of the evening’s most memorable musical performances. Pre-registration will be required to view the free public program.

Sir Rice has worked in music, theatre, and films since 1965 when he met Andrew Lloyd Webber, a fellow struggling songwriter. Their collaborations include the phenomenally successful musicals Joseph and the Amazing Technicolor Dreamcoat (1972–2019), Jesus Christ Superstar (1971–2019), and Evita (1978–2019). Sir Rice has since worked with other distinguished popular composers such as fellow Disney Legends Sir Elton John (The Lion King, Aida (1998–2002)) and Alan Menken (Aladdin (1992), King David (1997), Beauty and the Beast), Björn Ulvaeus and Benny Andersson (Chess (1984–)), and Stuart Brayson (From Here To Eternity (2013–2016)). He has also written songs with Freddie Mercury, Ennio Morricone, John Barry, Rick Wakeman, and Gary Barlow, among many others.

Sir Rice’s many accolades include three Oscars, four Tonys, five Grammys, one Emmy, 13 UK Ivor Novello awards, a Hollywood Walk of Fame Star, induction into the Songwriters Hall of Fame, and fellowship of the British Songwriters Academy. He was knighted for service to music and sport in 1994, and was named a Disney Legend in 2002.

“We’re pleased to present our year-end fundraising event—and our biggest cast of virtual presenters and contributors so far—by honoring Sir Tim Rice’s lifetime of incredible contributions to film, music and theatre,” says Executive Director of The Walt Disney Family Museum, Kirsten Komoroske. “Our virtual fundraisers have been a wonderful way to connect our museum community with legendary luminaries, and to continue our mission to provide high-level education in art and animation to the next generation of creative talent.”

Event proceeds will support The Walt Disney Family Museum’s educational programming, including its newest initiative, the At-Promise Youth Animation Academy. The Academy is an intensive animation-focused jobs-training program, with an emphasis on students experiencing economic and social displacement.

Tickets for the virtual fundraiser’s VIP Experience start at $100, with tiered ticket and sponsorship options, as well as exclusive autographed gifts. There is also a limited the opportunity at the $35,000 level to attend an intimate private cocktail reception and viewing party hosted at the museum on Sunday, December 5th.