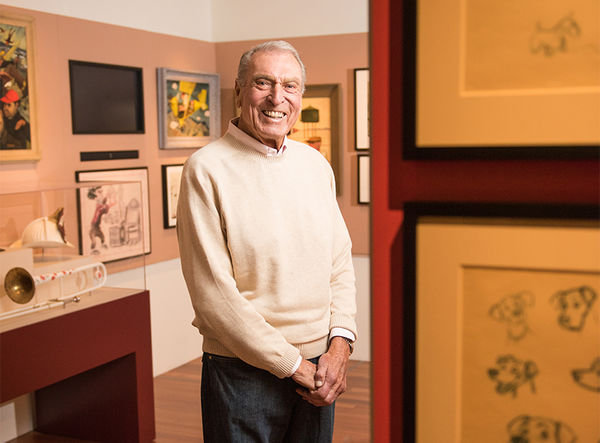 Ron Miller, husband of Diane Disney Miller, son-in-law of Walt Disney, President of the Board of Directors at The Walt Disney Family Museum, and owner of Silverado Vineyards, has passed in Napa, California at the age of 85.

At age 21, Ron, a member of the University of Southern California football team, was introduced to 20-year-old Diane Disney on a blind date. They were married in Santa Barbara on May 9, 1954.

Ron served in the Army and then played professional football for the Los Angeles Rams before his father-in-law recruited him to work at The Walt Disney Studios. There, he ascended from motion picture and television production roles to CEO of what is now The Walt Disney Company.

Ron first started working for Walt as part of the original Disneyland team, where he was employee number six. After Ron officially joined The Walt Disney Company, Walt sponsored his membership in the Screen Director’s Guild. Ron’s first job in this capacity was serving as second assistant director on Old Yeller (1957). Eventually, as CEO, Ron pushed the Company to expand and explore, creating Walt Disney Home Video, Touchstone Pictures, and The Disney Channel.

Ron, Diane, and Diane’s mother, Lillian, established Silverado Vineyards in 1981, four years after they purchased the property. This place, near the small town of Yountville, California, became Ron and Diane’s permanent residence.

Ron supported Diane’s pursuit in documenting the life and accomplishments of her father, from producing the documentary film Walt: The Man Behind the Myth (2001) to establishing The Walt Disney Family Museum in the Presidio of San Francisco in 2009.

Ron was a passionate outdoorsman. Alpine skiing, hunting, fly-fishing, and golf were lifelong pursuits. He was an experienced horseman with a cattle ranch near Montrose, Colorado.

Ron and Diane were generous philanthropists, supporting many causes, including classical music and ballet.

Donations may be made to the memorial fund that The Walt Disney Family Museum has established in honor of Ron and Diane Disney Miller. Donations will support the museum's ongoing education efforts, about which Ron was passionate. Donations and cards can also be sent to the family through The Walt Disney Family Museum, ATTN: Director's Office; 104 Montgomery Street, San Francisco, CA 94129.

Services will be private and the museum has not yet planned a public commemoration of Ron.

ABOUT THE WALT DISNEY FAMILY MUSEUM

The Walt Disney Family Museum presents the fascinating story and achievements of Walt Disney, the man who raised animation to the level of fine art, transformed the film industry, tirelessly pursued innovation, and created a global yet distinctively American legacy. Opened in October 2009, the 40,000-square-foot facility features the newest technology along with a vast collection of historic materials and artifacts to bring Disney’s achievements to life, myriad interactive galleries presenting early drawings and animation, movies, music, listening stations, a spectacular model of Disneyland, and much more. The museum is a 501(c)(3) nonprofit organization located in the scenic Presidio of San Francisco.