An Evening with Alan Menken 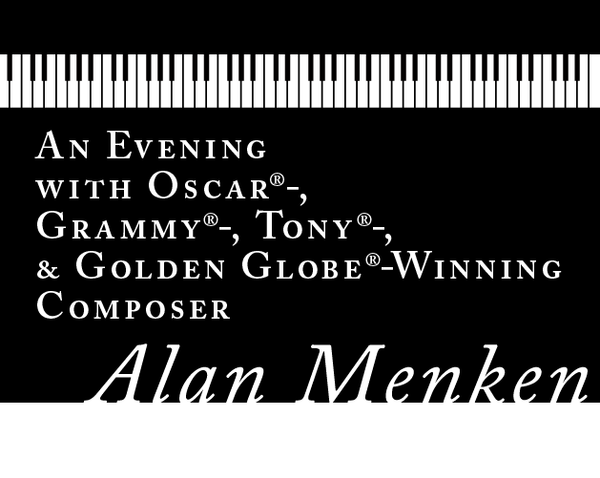 The evening will begin at 5pm PT with a VIP chat, <em>Up Close and Personal with Alan Menken</em>. Menken and his longtime friend and collaborator, music producer Chris Montan, will discuss the milestones and achievements of Menken’s inspiring career. Tickets start at $200 with tiered ticket and sponsorship options and the opportunity to submit questions for Menken, as well as receive exclusive, signed Disney artwork.

At 5:30pm PT directly following the program, tune in to a free performance by Menken, showcasing some of his legendary Disney songs, “Under the Sea,” “A Whole New World,” and “Be Our Guest,” and other celebrated classics from his films and Broadway musicals. During the live performance, Menken will be joined by his friend and acclaimed composer and actor, Lin-Manuel Miranda, with whom he is currently writing new music for a liveaction reimagining of <em>The Little Mermaid</em>.

To purchase tickets for the <em>Up Close and Personal with Alan Menken</em> VIP chat and to register for Menken’s free virtual performance, please visit waltdisney.org/menken.

His chart-topping songs have included “Beauty and the Beast” (1991), “A Whole New World” (1992), “Colors of the Wind” (1995), and “Go the Distance” (1997). Winner of the 2012 Tony and Drama Desk awards for his score for Newsies, he has won more Academy Awards® than any other living individual, including eight Oscars® with four for Best Score and four for Best Song; 11 Grammy® Awards (including Song of the Year for “A Whole New World”); seven Golden Globes; London’s Evening Standard Award; the Olivier Award; the Outer Critics Circle Award; and the Drama Desk Award.

Other notable achievements include reaching Billboard’s number one single for “A Whole New World” and number one album for Pocahontas; his 2008 induction as a Member in the Songwriter’s Hall of Fame, followed by receiving a lifetime achievement acknowledgement of the Johnny Mercer Award in 2017. In 2001, he received the distinction of being named a Disney Legend. As well as being awarded two doctorates in Fine Arts from New York University and the North Carolina School of the Arts, he also received a star on the Hollywood Walk of Fame in 2010.

ABOUT THE AT-PROMISE YOUTH ANIMATION ACADEMY

The vision for the At-Promise Youth Animation Academy is built on Walt Disney’s inspiring story of overcoming adversity, his legacy of fostering the next generation of creative talent, and the museum’s own commitment to community outreach. This unique jobs-training program will be designed for young people experiencing economic and social displacement, providing them with comprehensive training in art, animation, storytelling, and other disciplines. In addition to helping dismantle the school-to-prison pipeline, disproportionately experienced by young people of color and prevalent in under-resourced communities, the Academy will strive to diversify the employee ranks in the animation and film industries.

The At-Promise Youth Animation Academy will also seek to provide a nurturing educational environment in which students not only learn animation skills that can set them on a career path in a creative industry, but also the importance of perseverance, problem-solving, collaboration, and conflict resolution.