The Walt Disney Family Museum is pleased to announce its newest special exhibition, Walt Disney’s Nine Old Men: Masters of Animation, on view to the public from May 17, 2018 through January 7, 2019 in the Diane Disney Miller Exhibition Hall.

Masters of Animation will feature an array of artwork and family mementoes from each of the Nine Old Men, including sketchbooks, caricatures, and snapshots, as well as original art from classic animated films such as Pinocchio (1940), Bambi (1942), Peter Pan (1953), Lady and the Tramp (1955), and Sleeping Beauty (1959).

Never-before-seen personal artwork, paintings, sculptures, concept art, and character drawings—including Mickey Mouse—will all be on display, alongside documentary interviews with these masters of animation, as well as rarely exhibited pencil tests and final color scenes that showcase their genius.

This original exhibition is curated by Don Hahn, Academy Award®-nominated producer of Beauty and the Beast (1991) and The Lion King (1994). Hahn conducted extensive research on the Nine Old Men, sitting down with each of the animators’ families for in-depth discussions, unearthing details about the unique backgrounds and personalities of the men behind iconic Disney characters and films.

On Nine Old Men Mondays, enjoy free admission to the special exhibition, Walt Disney’s Nine Old Men: Masters of Animation, on Mondays now through January 7. While here, stop by Home for the Holidays at Carolwood and Fresh Starts, which are free to the public every day.

Highlights from the Museum Store 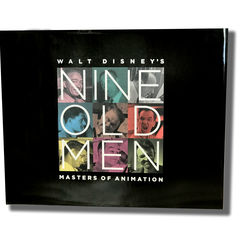 Interested in taking a piece of your visit home with you? Our Museum Store features an abundance of wonderful souvenirs and gifts, ranging from exhibition-specific keepsakes to Disney history books and collector's items. Please visit us online, or in person during the museum's regular hours.

About the Exhibition Catalog

Produced in conjunction with The Walt Disney Family Museum's 2018 exhibition of the same name, Walt Disney's Nine Old Men: Masters of Animation features an array of fascinating artwork and family mementos from each of these accomplished gentlemen, such as sketchbooks, caricatures, and snapshots as well as original art from the classic films Pinocchio (1940), Bambi (1942), Peter Pan (1953), Lady and the Tramp (1955), and Sleeping Beauty (1959).

Before you make a purchase, be sure to join our membership program to receive exclusive discounts!