Join designer and modelmaker Mark Hurt as he discusses his process and in-depth research for creating the intricate scale-model of Walt Disney’s Carolwood home for our previous special exhibition Home for the Holidays at Carolwood (2017–19).

Join us for a virtual celebration of Walt Disney’s birthday, honoring the many innovations Walt and his company have contributed to the entertainment and animation industry, and the diverse artists that continue his legacy of innovation today. The Walt Disney Family Museum will be offering a week-long array of free virtual programming in honor of Walt’s Birthday in 2020 to allow everyone the opportunity to enjoy the museum from the comfort of their own home. Join us online during the week Monday, November 30 to Saturday December 5 for programs that highlight Walt’s life, work, and legacy. Happy Birthday, Walt!

See the full array of programming on the Walt's Birthday event page. 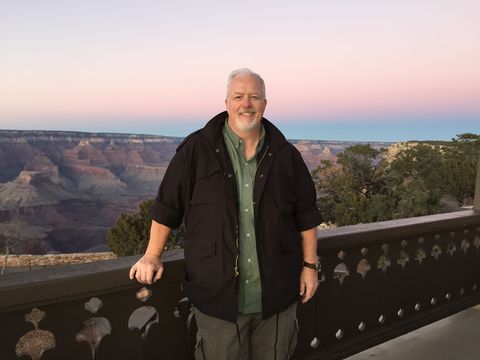 Hurt is one of the founders of the Atlanta-based company Nanoventions, which combines innovative optical and non-optical microstructure mastering techniques with economic manufacturing methods to bring high quality micro-optic solutions to many already established markets. Current applications of the company's technologies include: document and product security and authentication technologies to prevent counterfeiting of currency, driver's licenses, event, and transit tickets, and pharmaceuticals; and industrial optical films for use in commercial lighting, LCDs, televisions, and solar cells.

Hurt holds 26 US patents with numerous patents pending. He is a member of, and published author for, the International Society for Optics and Photonics. He supports Best Friends Animal Society, and the Pumpkin Foundation, which benefits rescued animals. Hurt is a founder and the President of the Kauai Society for the Prevention of Cruelty to Animals. He and his wife currently reside in North Carolina, while their son, a United States Marine, is an Aerospace Engineer at NASA.