Happily Ever After Hours | Director and Filmmaker George Scribner

Registration for this program will open to the public starting Monday, October 5 at noon. 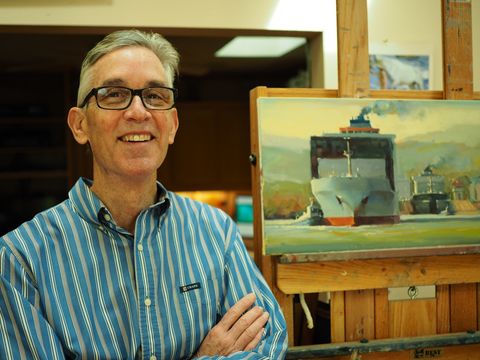 George Scribner is a fine artist, animator, and filmmaker. He was born and raised in Panama City, Panama and has been with The Walt Disney Company for more than 35 years. In 1983, he became a Character Animator at Walt Disney Feature Animation, and in 1988 directed Oliver & Company, a full-length animated feature. Scribner is currently working at Walt Disney Imagineering as a contractor directing Animation projects and creating Concept Art for upcoming attractions.

Commissioned by the Government of Panama to record the expansion of the Panama Canal, Scribner spent more than nine years creating large-scale oil paintings documenting the construction of this massive engineering marvel. He completed 35 original large-scale paintings, which are now part of the permanent collection at the Museo del Canal in Panama City.

Scribner was also commissioned by The Walt Disney Company to paint scenes of the construction of Shanghai Disneyland. He not only painted scenes of the construction of this massive entertainment complex, but directed animation projects for a number of attractions. His paintings became part of the historical documentation for this newest addition to Disney Parks & Resorts. His newest role with The Walt Disney Company will be to chronicle in oil paintings the construction of our newest Disney Cruise Line ships. Commented Scribner, “Someone at Disney called me the ‘Sultan of Steel. I’ll take it.’”