Join Academy Award®-winning producer Jonas Rivera for behind-the-scenes stories from his acclaimed filmography at Disney·Pixar, including Up (2009), Inside Out (2015), and Toy Story 4 (2019).

Registration for this program will open to the public starting Friday, May 29 at 10am. 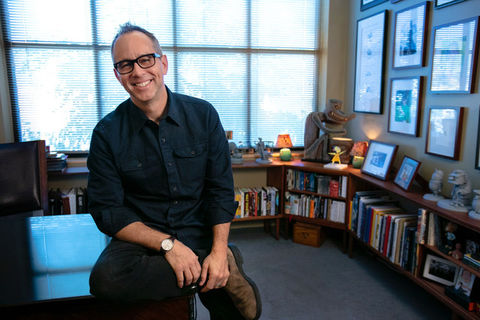 Jonas Rivera joined Pixar Animation Studios in 1994 to work on Toy Story (1995) as the studio’s first and only production intern at the time. He advanced roles on almost every subsequent Pixar feature film until becoming Producer of Oscar®-winning 2009 film, Up. Rivera teamed up once again with Up director Pete Docter for Inside Out (2015), which won an Academy Award® for Best Animated Feature and was nominated for Best Original Screenplay. He most recently received a second Academy Award for Best Animated Feature this year for Toy Story 4 (2019).

In his executive role as Senior Vice President, Production, Rivera oversees all of feature film production at the studio.

Rivera has been awarded Producer of the Year in Animated Features by the Producers Guild of America for his work on Up, Inside Out, and Toy Story 4. His work on Up earned a nomination for Best Picture by the Academy of Motion Picture Arts and Sciences®—only the second animated film in history to do so.

A Bay Area native, Rivera grew up in Castro Valley and graduated from San Francisco State University with a degree in Film Production.