The Walt Disney Family Museum’s collection of maquettes, or small character reference sculptures, spans various Disney animated feature productions including Pinocchio (1940), Fantasia (1940), and Peter Pan (1953). While most in our collection are painted plaster, there are a few exceptions—such as this The Ugly Duckling (1939) maquette—where surfaces have been left unpainted. 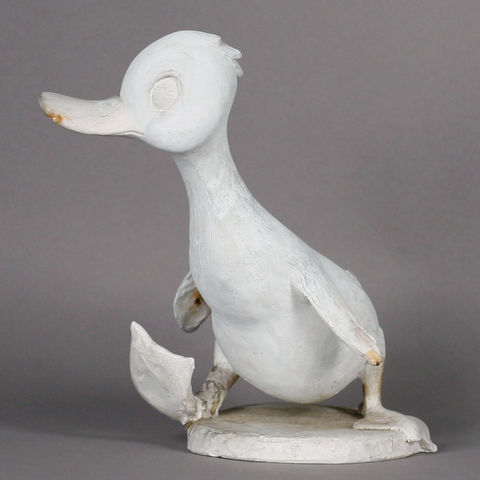 Currently in storage, this never-before-seen object came into the collection in 2011. In 2019, it was considered for display in Gallery 3 of the main museum—the gallery featuring Disney’s short cartoons between 1929–1939—when objects on display in the Ferdinand the Bull (1938) and The Ugly Duckling (1931 and 1939) case were due for a rotation. As part of our ongoing long-term preservation efforts, The Walt Disney Family Museum rotates objects on display periodically to help prevent deterioration and irreversible damage from long periods of exhibition. This also assures that there is always something new for returning guests to see.

When it arrived, the surface of the sculpture was dusty and stained. There was a vertical stain on the back from the internal iron support and the surface was uneven and discolored. The white surface was very friable; residues came off in your hand when it was handled. There was rust-colored discoloration on the left side of the duck’s bill from corrosion of the internal wire support. The left foot had been previously repaired, but had become weak and unstable over time. The adhesive used in the repair was very rubbery. Although the object was deselected during the final curatorial selection, it was decided that a conservation treatment should be carried out to stabilize the foot and reduce the surface dirt and grime in order to prevent further damage to the object before returning the object to collection storage. 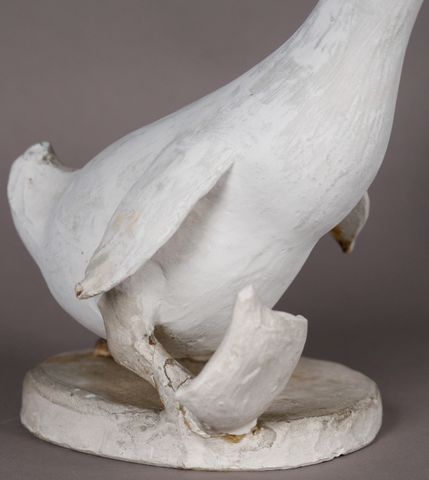 Restoring the Disney Sculpture to Its Full Potential

The first step in the treatment included reducing surface grime with a soft brush and HEPA vacuum. The rubbery repair adhesive was carefully removed with a microscalpel and tweezers, done under magnification to ensure that the original plaster surface was left undamaged during the process. This allowed the left foot to be carefully removed, cleaned, and sealed with an acrylic adhesive, B-72, in acetone and ethanol. Once dry, the foot was then reattached to the leg with a higher percentage application of B-72 bulked with fumed silica. Then, a small gap along the bottom of the foot and a small loss to the inside break edge along the cracks of the join lines were filled with an acrylic spackle that, once dried, matched the color of the unpainted plaster.  This helped to stabilize the foot and the repaired area, making the object safe for handling and future exhibition.

Museums have a responsibility for the objects that are entrusted to their care. Whether those objects are on exhibition or safely stored away for future exhibition or study, the objects in The Walt Disney Family Museum collection are all treated with the same amount of care and preventive conservation measures are taken to ensure their long-term preservation. When character model statues were created, they were created as a tool to help the animator during film production. They were not made with materials known for their long-term stability or were they intended to be included as objects in a museum or museum collection. The Walt Disney Family Museum takes great care in monitoring environmental conditions such as light exposure, temperature and relative humidity for object on display and for objects housed in collections storage. While this special object may not have made it into this rotation, it remains safely stored and safely preserved for its future debut at The Walt Disney Family Museum.