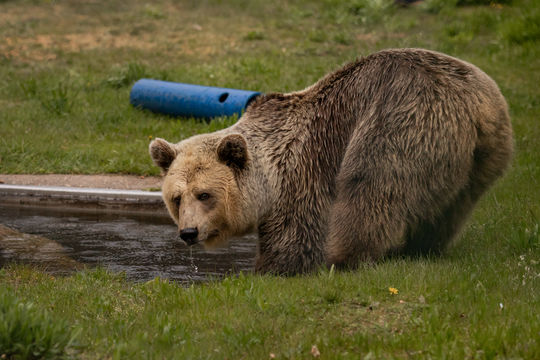 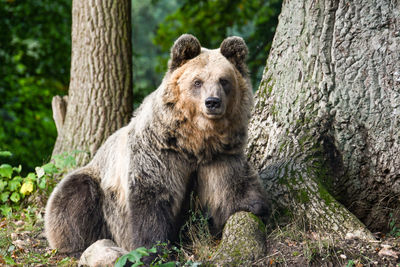 Three-legged bear Dushi was born in 2009 and kept under horrific conditions for many years with other wild animals at a zoo in Albania dubbed “Europe’s worst zoo.” The female bear lived in a small, dirty cage with no access to fresh water or appropriate food. Due to the confinement and lack of stimulation, Dushi was in poor physical conditio with clear behavioral disorders.

In October 2018, global animal welfare organization FOUR PAWS rescued Dushi with ten other neglected wild animals from the zoo and brought her to a temporary accommodation in Tirana, Albania.

After FOUR PAWS was approved by Albanian authorities in April 2019, Dushi traveled 40 hours through nine countries to her new species-appropriate home, the FOUR PAWS-operated Bear Sanctuary Mueritz in Germany.

Today, despite her disabilities, Dushi has been adapting great to her new environment. After receiving regular veterinary checks, her health condition has improved significantly. She can often be seen in the meadow relaxing or playing with water in her pond. She often grazes and picks the flowering dandelions.

Her favorite enrichments are watermelon and smoothie ice bombs prepared by the animal caretakers when the weather gets warmer. When it comes to food preferences, Dushi is rather picky but loves to eat carrots.

FOUR PAWS is a global animal welfare organization for animals under direct human influence, which reveals suffering, rescues animals in need, and protects them. Founded in 1988 in Vienna by Heli Dungler and friends, the organization advocates for a world where humans treat animals with respect, empathy, and understanding. The sustainable campaigns and projects of FOUR PAWS focus on companion animals including stray dogs and cats, farm animals, and wild animals—such as bears, big cats and orangutans—kept in inappropriate conditions and disaster and conflict zones. With offices in Australia, Austria, Belgium, Bulgaria, Germany, Kosovo, Netherlands, Switzerland, South Africa, Thailand, Ukraine, UK, USA, and Vietnam and sanctuaries for rescued animals in 11 countries, FOUR PAWS provides rapid help and long-term solutions. FOUR PAWS sanctuaries provide species-appropriate homes for animals rescued from improper keeping conditions from all over the world, including neglected zoos, circuses, or other forms of private keeping. Each FOUR PAWS sanctuary maintains the highest standard of care for its rescued animals.

Bears and big cats that have grown up under human influence, unfortunately, cannot be released into the wild. In captivity, they lose vital instincts they need to survive, especially learning how to hunt and scavenge for food. Many of the rescued bears and big cats often display severe behavioral disorders due to their former caged existence and require the special attention of FOUR PAWS animal caretakers. Animals at all FOUR PAWS sanctuaries will never be bred, sold for profit, or traded to other sanctuaries, zoos, or any other animal practice or trade. Animals rescued by FOUR PAWS find a home at its sanctuaries for life.

Proceeds from the sale of artworks made by the featured endangered animals will go towards supporting their respective partner sanctuary and the important conservation work they do. Proceeds from the sale of Andreas Deja’s wildlife-inspired artwork will benefit The Walt Disney Family Museum’s educational initiatives, including the At-Promise Youth Animation Academy.

Costs related to framing, production, and packing materials are included in the retail price of the artwork. Shipping costs and sales tax are added on during the checkout process.

When purchasing an artwork, please select either pickup or delivery. Artworks designated for shipment will be shipped to the recipient after the exhibition closing (currently scheduled for October 16, 2022), no later than December 1, 2022 via FedEx insured, signature required. Shipping is available only to locations within the U.S.

Artworks designated for pickup at the museum will be available after the exhibition closes, tentatively scheduled for October 16, 2022 (subject to change, customers will be notified of changes). Directions and procedure regarding pickup will be provided before the exhibition closes.

All original artworks are sold as-is and are shipped in the frame fabricated or sourced for the exhibition—no exceptions. Prints are sold unframed.

If you have any questions, please email marketing@wdfmuseum.org