In late 1919, Walt Disney returned from his voluntary Red Cross service in post-World War I France. An independent eighteen-year-old, he’d resettled in Kansas City, Missouri and attempted to establish a career in illustration, graphic design, and cartooning. However, within a year’s time, a different art form caught his attention.

“I started, actually, to make my first animated cartoon in 1920,” Walt later explained. “Of course they were very crude things then and I used sort of little puppet things.” These earliest experiences were during Walt’s employment at the Kansas City Slide Company, soon to be re-christened as the Kansas City Film Ad Service. The firm licensed illustrated advertisements for local movie theaters, and produced short promotional animated segments.

Walt had already been trying his hand as an entrepreneur in commercial illustration and graphic design, along with his new friend and business partner Ubbe Iwwerks (later: Ub Iwerks). But their business struggled. Walt was the first to make the jump to the Slide Company and Iwerks soon followed.

By the early 1920s, animation—which, at least commercially speaking, was centered around New York City at the time—wasn’t new, but it was certainly still novel, and animators still had the freedom to experiment in different styles and techniques to see what resonated with audiences. An early master was cartoonist Winsor McCay, whose 1914 short subject Gertie the Dinosaur proved to be an achievement in personality animation. Later, as the United States became fully enmeshed in World War I, McCay produced an animated propaganda film The Sinking of the Lusitania* (1918). The short highlighted animation’s unique journalistic potential, giving vision and movement to an event where no photographers were present. “Winsor McCay’sGertie and other animation novelties stimulated a great public interest and created a demand for this new medium,” Walt explained. “This in turn encouraged other pioneers to creative efforts that in time led to the establishment of the animated cartoon as an industry.” 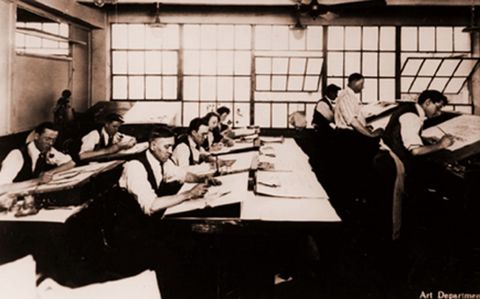 At the Kansas City Film Ad Service, Walt, Ub, and other young artists were entering a rapidly developing art form. Their first creations were rudimentary, stop-motion films far behind the latest advancements of the day. In their pictures, cut-out figures with riveted joints were animated frame-by-frame beneath a camera. Despite the rudimentary elements, each assignment was a new lesson. For some advertisements, Walt manipulated cut-out letters, animating them in reverse to appear as if they were flying into sequence. “If I wanted to emphasize a telephone number,” Walt said. “I’d have that number march on the screen on little legs, one numeral at a time. Then one number would land in the wrong place and it would have to scurry around until it found its rightful position in relation to the other numbers.”

Walt and Ub conducted research at the Kansas City Public Library. The former would joke that “any book that offered information on drawing was likely to be found listed on my card.” In particular, E.G. Lutz’s 1920 book Animated Cartoons: How They Are Made, Their Origin and Development was a significant influence. In 1920, animation was an elusive art form and few understood its actual techniques. Lutz’s book was among the first publications to elucidate “the mysteries of their manufacture,” as one Illinois newspaper described it.

The Lutz book was pragmatic and emphasized efficient techniques that saved time and money in cartoon production. John Randolph Bray, another New York animator, was among the first to establish an industrial workflow of this kind in animation. Lutz also foresaw a sophisticated future for animation, claiming the medium would transcend “the comic cartoon” and embrace “serious and worthwhile themes.” Most importantly, the book convinced Walt that animation’s greatest potential was with hand-drawn techniques rather than cut-outs. Inspired by Lutz’s writing, he started to incorporate “new tricks and phases of action” into his work at the Film Ad Service.

As a “Show Card and Title Man” at Film Ad, Walt was entranced by the medium. “The trick of making things move is what got to me,” he’d later say. His aspirations quickly grew beyond his day job and he entertained ideas of making his own motion pictures independently. In 1921, using a borrowed camera from his boss at Film Ad, Walt began “home experimenting” in the Disney family garage. His earliest attempts were topical fragments caricaturing social life and political news in Kansas City. Subjects ranged from women’s fashion to streetcar service to political patronage in the city police department.

Walt applied different technical styles in these experiments, including so-called “lightning sketching,” which was an evolved version of a technique with origins in 19th century speed-drawing performances. The concept of “wowing” audiences with rapid and illusory illustration was transmuted into some of the earliest motion picture cartoons. James Stuart Blackton’s Humorous Phases of Funny Faces (1906) remains a standard example: Blackton’s own hand is seen drawing in real-time beneath the camera, and the sketches soon take on a life of their own as the artist’s hand disappears and animated expressions ensue.

Compared to Humorous Phases, Walt’s lightning sketches were less refined. In fact, they weren’t even animated, save for the artist’s hand. “It wasn’t really my hand [on screen] ... I couldn’t get my hand under the camera,” Walt later explained. “But I had a photograph of my hand holding a pen, and I re-photographed [it] so that on the screen there was an illusion of my hand doing the sketching.” The animated figure of Walt’s hand-crafted static drawings, and each movement added continued layers of detail and humor.

A final component of Walt’s first experiments, however, would prove to be a fully-animated cartoon short subject. The brief piece of footage lampooned the reorganization of the Kansas City Police Department, showing new officers marching into a city jail and promptly being kicked out. At the end, a lone man hangs a sign out front, which reads “Cops Wanted.” Walt utilized cycle animation and other common techniques—some of which are exemplified in Lutz’s book—to create the film single-handedly. It premiered, along with the lightning sketches, at Kansas City’s prestigious Newman Theater on March 21, 1921. Billed as Newman Laugh-O-grams, they earned Walt $150—and a request for more.

Walt continued to develop cartoons on his own, co-founding Kaycee Studios later in 1921 with another young artist Fred Harman, all the while maintaining his day job. But his desire for creative and financial independence led him to end his tenure at the Kansas City Film Ad Service and incorporate his own business, Laugh-O-gram Films in the spring of 1922. 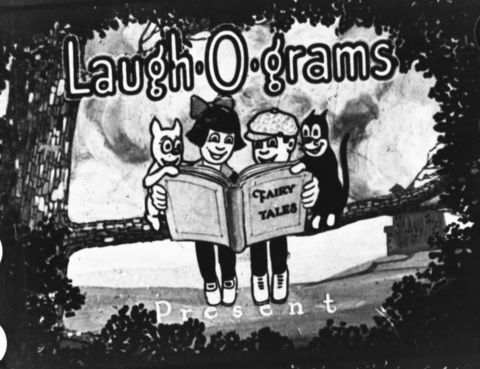 With generous investments from friendly neighbors, Walt was fully on his own and would attract a young cohort of employees. Among them were Ub, Rudolph Ising, and Hugh Harman (younger brother of Fred), all of whom later played significant roles in the establishment of Hollywood animation. The Laugh-O-gram productions were fully hand-drawn animated short subjects and depicted fairy-tales all updated with Jazz Age gags, including Little Red Riding Hood (1922), Puss in Boots (1922), and Cinderella (1922).

These ambitious films were influenced both in presentation and technique by Paul Terry’s Aesop’s Fables. A review of the Terry cartoons from June 1921 reads like a description of Disney’s own output ten or fifteen years later. “[Aesop’s Fables] are superior to anything of the kind heretofore produced. The comic action of the animal and bird characters is said to be so realistic as to cause the beholder to forget that it is all obtained by the animated cartoon process.” The review also pointed out that Terry was at the forefront of reducing workflow “to a minimum of time and labor.”

Nadine Simpson, a Laugh-O-gram employee with film distribution connections, would trade for old prints of Terry cartoons, among others. Walt and the artists would then cut the footage apart to review time and again. Hugh Harman later recalled to historians Michael Barrier and Milton Gray that “we learned a lot from Terry.” Even before Laugh-O-grams’ official incorporation, Harman remembered that Walt and his older brother Fred were “determined...to become their own Paul Terrys.”

Some scholars, such as Russell Merritt, speculate that the proclivity of mice in Terry cartoons may have had a specific influence on later Disney fare of the silent era, and perhaps even on Walt’s most famous cartoon creation. Visions of Mickey Mouse aside, it’s clear that Walt took the idea of developing a full-fledged series of animated fairy tale worlds populated by caricatured animal characters quite seriously—and the Laugh-O-grams were his first serious attempts.

In a 1917 publication, James Stuart Blackton would write, “Camera tricks are still all right, but they have reached a point where they must interpret, not divert.” At a time when Walt Disney was still in high school, Blackton could see where animation was heading, and where Walt himself would ultimately help lead it.

FOOTNOTES:
*An original production drawing from this cartoon is retained in the museum’s collection.