Look Closer: Women in the Disney Ink and Paint Department

Go back in time with me to the 1930s and ‘40s, when the Disney Studio was experiencing its Golden Age, and men and women were relegated to very specific roles in the animated film process.  If you were a man blessed with both creativity and artistic talent, you held a spot in the Animation Department, but if you were a woman with the same skills, the only department open for you at that time was the Ink and Paint.  This type of job restriction could be found not only at Disney but at every other studio of that kind, for as Patricia Zohn states in her Vanity Fair (March, 2010) article, “Coloring the Kingdom,” animation was considered a man’s medium. 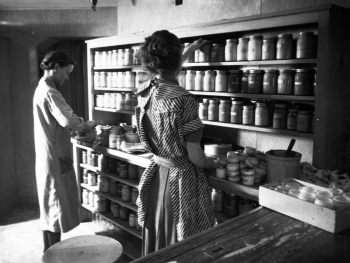 This was made clear in an early Disney employment brochure as well as in the letter a female would likely receive if she were inquiring about a job beyond that of a secretary:  “Women do not do any of the creative work in connection with preparing the cartoons for the screen, as that work is performed entirely by young men… The only work open to women consists of tracing the characters on clear celluloid sheets with India ink and filling in the tracings on the reverse side with paint according to directions.”

Much has been written about the amazing work produced by the men in the Disney Animation Department during its Golden Age, particularly the revered Nine Old Men, but it was the unsung women in Ink and Paint who also played an invaluable role in the creation of those early animated films.  Every drawing produced by the animators and intended for film eventually found its way to the hands of these talented “girls,” as they were often referred to.  With their perfect pen and brush strokes and careful applications of vibrant color, the approximately 100 women of Ink and Paint skillfully prepared the celluloid sheets, or cels, before they were photographed for production.

The working lives of these talented and dedicated young women- most under the age of 25-who helped produce such classics as Bambi,Pinocchio, and Snow White and the Seven Dwarfs was the focus of last month’s Look Closer series.   Over 140 visitors to the Museum from March 23rd to the 25th, gathered in gallery 3 to hear Museum educators talk about the unique working conditions experienced by the women in Ink and Paint, the repetitive and highly precise work demanded of them, and the friendly and romantic relationships they formed as a result of the Studio environment.

Among the details most interesting to the audience was the fact that inkers were considered the “queens” of the department.  Their steady hands not only had to trace the animators’ pencil lines exactly but also had to capture the feeling of what the animators were intending in the scenes.  Inkers used the thinnest nibs available to apply India ink to the cels and preferred being assigned characters like Pluto and Goofy to trace, since those long, lean figures required fewer strokes of the pen.  (An example of their impressive work can be found in the Ink and Paint display case in gallery 3.)

Painters had their own set of challenges: apply color exactly within the lines traced by the inkers and work quickly so the paint didn’t leave streaks.  The paint, of which they had hundreds of shades, was made in the Studio laboratory adjoining the building.  In the early years when operations were located on Hyperion Avenue, paints were given numbers to designate the different shades.  Later, after the Studio moved to the current Burbank location, paints were occasionally named after individuals, and it was a special honor for a woman in Ink and Paint to be associated with a particular color.  (Some of the paint jars in gallery 3 bear labels with the name of a character or an item in a scene for which the color was intended.  The display case contains examples of “color keys,” which directed the painters as to where to apply the paint.)

Guests at the Look Closer presentations also appreciated hearing about the two “Tea Times” women in Ink and Paint enjoyed daily- breaks during which a uniformed maid served tea and the occasional special treat such as Lorna Doones.  In her lengthy article, Zohn comments that these women always dressed fashionably, coming to work in dresses, pearls and heels or high-waisted pants and slip-ons, which were made acceptable by Katherine Hepburn.  Over time they were required to wear silky pongee smocks to prevent particles from their clothing from falling onto the cels.  Thin, white cotton gloves were also worn to protect the cels; the women customized these gloves by cutting off the thumb and first two fingers on their working hand.

Though the women in Ink and Paint and the men in Animation were not encouraged to mingle- on one of the gallery 3 audios painter Betty Kimball recalls their not being allowed in Animation without good reason- there were many chances for casual interactions. Close relationships developed between the sexes, and many of them resulted in marriage, the most famous being that of Walt and Lillian. Once the Disney Company moved to Burbank, Ink and Paint was located further away from the other departments, and was soon referred to as “the Nunnery.”  But though the casual interactions of the past discontinued, the men and women still managed to get together. One rival studio’s press release claimed that Disney was a “romantic paradise for young women employees… for the amount of studio romances and marriages far exceeds that of any other studio.”

Tea times and encounters with men aside, the life of a young woman in Ink and Paint could be exhausting as she worked double shifts to meet deadlines and strained her eyes to help complete the thousands of cels required for production.  She also didn’t make very much money, at least compared to an animator ($18 per week in 1941 vs. $300 for a top animator), and often had to rise at 4:40am to ride a bus or streetcar to make it to the Studio by 9:00am.  But though the job took a toll on both their physical and personal lives, the women in Ink and Paint repeatedly said that they loved what they did and considered it a privilege to work for Disney.  Zohn’s article ends with a quote from painter Claudia Hubley Thompson who says, “The idea of working at Disney’s was just the end, the very end.”