Look Closer: The Art of Cinderella

The moment when Cinderella is transformed from her tattered rags into her shimmering ball gown is said to have been one of Walt Disney’s favorite pieces of animation. The significance and legacy of the treasured Disney animated feature Cinderella are indisputable. The film was the studio’s first unqualified hit since 1937’s Snow White and the Seven Dwarfs, and restored financial stability to the debt-ridden postwar studio. Some say its release initiated the “Second Golden Age of Disney Animation” by helping the studio reclaim its position at the forefront of feature animation.

Cinderella premiered in 1950, thirteen years after the release of the studio’s ground-breaking smash hit Snow White and the Seven Dwarfs. However, Walt Disney’s desire to adapt the popular fairy tale came much earlier. In fact, Walt produced an animated version of Cinderella for his first animation studio, Laugh-O-grams, in Kansas City in 1922, a year before he moved to Hollywood. The black and white cartoon short set the classic story of Cinderella in the contemporary times of 1920s.

Then in the 1930s, the Disney studio returned to the story ofCinderella and began work on a new adaptation as a part of the Silly Symphonies series. The project was ultimately discarded for reasons that are not fully known, though it is clear that attentions were turned instead towards the demanding production on the studio’s first feature-length animated film, Snow White and the Seven Dwarfs.

Following the success of Snow White, a number of animated films and package features produced disappointing box office returns, and the studio desperately needed to regain its footing as a successful cartoon production house. Poor returns on war-related production and the closure of foreign markets during World War Two drained much of the studio’s resources, and cultural sensibilities within the United States began to change. The art and storytelling of animated films was forced to adapt with the changing times. Producing a costly, time-consuming animated feature seemed riskier than ever.

As of the late 1940s, a number of adaptations of classic stories had been in development for years, including a few that had been interrupted by the impact of World War II. These included Peter Pan, Alice in Wonderland, and Cinderella. Because Cinderella shared certain story elements with the studio’s earlier hit Snow White, it was chosen to be the first in a line-up of new animated features. In addition, the characters in Cinderella seemed more appealing than the comparatively colder characters found in the other two projects.

The studio pulled out all the stops to ensure the success of the film. Walt himself sat in every story meeting and put forward a constant flow of suggestions for improvements. Live-action references were used extensively as a guide for the animators, and Tin Pan Alley composers were brought on to provide a moving score and plucky lyrics.

Fortunately, and to Walt’s great pleasure, Cinderella succeeded. Finally, the studio had an acclaimed, financially successful film that captured the hearts of motion picture audiences. The film also afforded the studio the chance to diversify into a number of different kinds of projects including television, nature documentaries,  a wide range of live-action and animated films, and Walt’s theme park Disneyland. 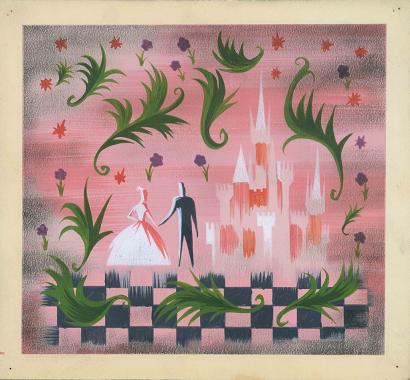 What made this film so exceptional? It looks astoundingly different from the black and white Laugh-O-gram version from 1922, and at the time ran the risk of following too closely in the footsteps of its predecessor Snow White and the Seven Dwarfs. One major element that is responsible for the distinct look and feel of Cinderella was the original concept art produced for the film.

The Walt Disney Family Museum features many examples of concept art, a number of of which are some of my favorite pieces in our museum. By definition, concept art is a form of illustration with the purpose of conveying the look and feel for an environment that does not yet exist. For instance, if a fantasy film is set in a faraway land, a concept artist might be tasked with creating illustrations to demonstrate the overall conceptual picture of how the place should feel for the audience. Mood is determined by color, shape, and texture, and is crucial in the process of fleshing out the artistic impact of an animated film.

The pieces we focused on during our Look Closer talks were created by the artist Mary Blair, whose work widely influenced Disney films throughout the 1940s, 1950s, and beyond. Blair is said to have been one of Walt’s favorite artists, emerging significantly after the Good Neighbor Tour to South and Central America in 1941. On the trip, Walt and a team of artists (including Mary Blair and her husband Lee), researched the art and culture of the countries they visited. Blair found her own unique artistic voice on the trip based on the color and vibrancy of the cultures she encountered. Blair was credited as the Art Supervisor on two films that directly stemmed from the influences of the trip, Three Caballeros and Saludos Amigos.

For Cinderella, Blair is credited with Color and Styling. In her work for the film, she established a romantic, whimsical sensibility using a soft, dreamy color palette, and gentle, sweeping shapes. This ambiance was carried over into the final film by the hands of animators, layout artists, and background artists.

For more examples of Blair’s work, our museum offers interactive touch screen stations in Gallery 7 that guests can explore at their leisure. Many more examples of Blair artwork can be seen on each station, including pieces from Cinderella, Peter Pan, and Alice in Wonderland. One memorable piece from Cinderella shows the prince and Cinderella dancing in a starry nighttime fantasy world. Originally the film was to include a dream sequence in which the couple is transcended by romance and dances among the stars. The scene was ultimately cut out of the film because it was thought that it broke the realism of the film and took the fantasy element too far. A similar sequence had also been cut from 1937’s Snow White and the Seven Dwarfs. Then in 1959, a version of this concept would finally come to fruition in the finale of Sleeping Beauty, when Princess Aurora and Prince Philip dance blissfully in the sky among the clouds.

Other examples of concept art on display in our museum include the work of Gustaf Tenggren, Tyrus Wong, and Eyvind Earle.