Happy Halloween! From its earliest ideas, Disneyland always had a “spook house,” and over nearly two decades of development, the project became a veritable “Who’s Who” of Walt’s most gifted artists and Imagineers. Disney Historian Ed Squair offers this overview of The Haunted Mansion exclusively for Storyboard. 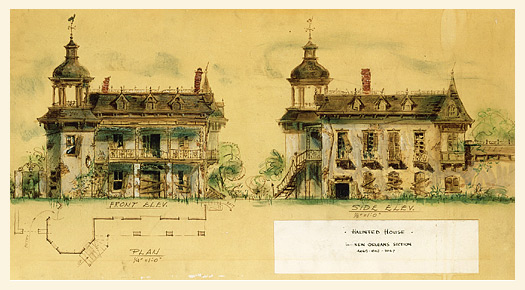 The Haunted Mansion at Disneyland is sometimes referred to as “the last Disneyland Attraction in which Walt himself had a hand in the design.” While he certainly saw some of the development of the Country Bear Jamboree and other later attractions, no other Imagineering endeavor was anticipated for so long as the Mansion. With a façade first built in 1962 – 1963, the Mansion definitely saw the longest period of development of any Disneyland Attraction. In fact, its first conception dated back to 1951, marking nearly two decades from pencil sketch to opening date of August 9, 1969. During that time, many of Disney’s most famous artists had participated in its development.

The first was Harper Goff, the famed designer of the distinctive submarine Nautilus in 20,000 Leagues Under the Sea. In 1951, Goff first sketched a haunted house for Disneyland Park, situated high on a hill behind a church on Main Street USA.

Ken Anderson, sometimes known as “The Tenth Old Man,” is believed to be responsible for a 1957 elevation drawing of a “haunted house” to be situated to the west of Adventureland. Later, Ken was the first to sketch the exterior of the Mansion much as it was built—but somewhat more dilapidated in appearance. While Walt Disney insisted nothing should look shabby in Disneyland, it seems there was a faction of Imagineers who believed you couldn’t build a haunted house that wasn’t run down. Anderson tried to sneak the dilapidated Mansion by Walt’s sensibilities by shrouding the building behind thick trees, so it couldn’t be seen from Disneyland proper, only discovered by Guests as they wound their way up the path onto the Mansion grounds.

Anderson also drew up a detailed script and map for a fully-realized walk-through version of the attraction, complete with a “lonesome” ghost host, and a bride and ghoul wedding scene as a climax to the action. Guests exited this mansion by walking out the family tomb, and up through open graves into the cemetery behind the house. 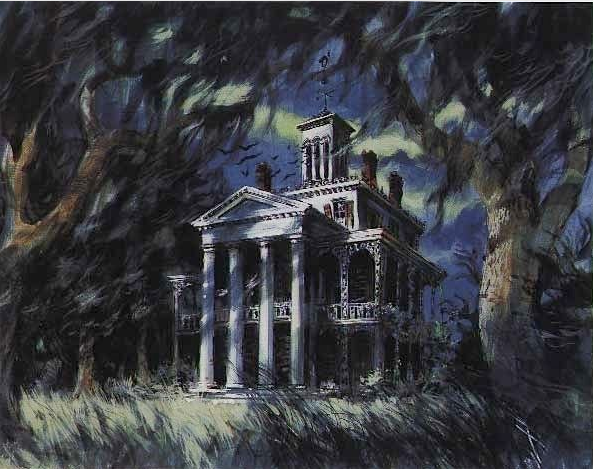 Artist Sam McKim contributed to the mansion’s development by adapting Anderson’s sketch of the dilapidated mansion into a full-color painting. Despite it’s run-down appearance, this is probably the best-known exterior view of the Mansion there is.

Imagineer Rolly Crump worked on Haunted Mansion effects from the earliest experiments with the “Pepper’s Ghost” effect, done in the Animation Building on the studio lot in the 1950’s, through to WED Enterprises’ (now Walt Disney Imagineering) establishment in their own offices in Glendale.

He recounted a research trip in which Walt Disney went with his team of Mansion developers to see the low budget 1960 Roger Corman shocker 13 Ghosts as research for the attraction show. If you’ve seen the film, you’ll know it shares with the Haunted Mansion the common image of transparent ghosts of specific character—a lion tamer, a headless man, etc.—but little else.

(As an interesting side note, Rolly once assured me that no one looked to the 1963 film The Haunting for inspiration—though its influence can clearly be seen in the stretching, almost breathing door in the Mansion’s upstairs corridor. Rolly did also confide, however, that different teams were working on the project, sometimes at the same time, without anyone but Walt knowing what all of them were doing).

Rolly Crump really caught Walt’s attention, though, with his bizarre designs for objects inside The Haunted Mansion. Walt couldn’t see them fitting within the show story, but he liked them so much he proposed having the attraction empty Guests into a “Museum of the Weird,” which would feature Crump’s designs as oddities collected from around the globe. Sadly, with Walt’s passing the idea of that museum did not last, and today Crump’s influence on the Mansion can best be seen in some of the chairs that have the distinct appearance of human-like faces in their stitched seams.

Imagineering’s focus on the attractions for the 1964-1965 New York World’s Fair put a halt to development of the Mansion. After the Fair, Marc Davis picked up the torch of trying to develop a Haunted Mansion attraction that would both move Guests through in a timely manner and follow a cohesive story. His script is somewhat sketchier than Anderson’s earlier script was, concerned more with giving general impressions than literally mapping out each moment of the attractions scenes and dialogue. Marc’s script is also the first to start with the elevator room that, by then, was determined to be needed to deliver Guests underneath the berm and train tracks at Disneyland and into a soundstage-like show building beyond.

He doesn’t start his story there, but in the first room, a portrait gallery of former residents of the Mansion. Further scenes include a fully alive séance medium (a forerunner of Madame Leota) and a room full of retired ghosts who take turns showing off their best scaring abilities. While Davis designed most of the humorous scenes associated with the second half of the Mansion, Imagineer Claude Coats is attributed with designing the evocatively empty—but nevertheless creepy—corridors, rooms, and hallways in the first half of the ride.

A recurring problem with all the walk-through versions of the Mansion show was the problem of traffic flow. Simply put, the Mansion had to be able to move a large number of people through every hour, difficult to obtain with small groups moving from room to room (and perhaps, small children becoming scared and refusing to move on in a timely manner!). This was settled with the Omnimover ride system, created by Roger Broggie and Bert Brundage. It created a constantly moving stream of vehicles, famously dubbed “Doom Buggies,” that could be individually turned to focus on scenes, as fit the show, and insure the Guests keep moving at an even pace.

It would be shortsighted to list the great contributors to the Mansion’s development without giving a nod to Imagineer Leota Toombs. Toombs lent both her name and face to Madame Leota, conducting her ghostly séance from inside her crystal ball, and Little Leota, the tiny figure that calls visitors to “Hurry Baaaack…” as they depart the mansion. (Little Leota was also voiced by Toombs, while the medium’s voice was Eleanor Audley, the voice of Lady Tremaine in Cinderella and Maleficent in Sleeping Beauty.)

Imagineer X. Atencio contributed one of the last scripts for the Mansion, dated roughly a year before the attraction opened in 1969. All of the elements of the show as it premiered were in his script, with the slight addition of one final attempt to thread a continuous storyline through the ride. The Ghost Host draws our attention to a raven wearing a distinctive necklace several times throughout the mansion, only to reveal at the end that he himself is the raven, and intends to possess one of the Guests as they leave. Atencio’s script also ends with a rough version of his iconic “Grim Grinning Ghosts,” the distinctive song that would become synonymous with the attraction itself.

While too many cooks may spoil the broth, the same clearly doesn’t apply to Imagineers and Haunted Mansions. The attraction remains a hybrid of many influences—part funny, part scary, part a walk-through, and part a ride—it is no one thing that any of its many contributors set out for it to be. One thing the Mansion clearly is, however, is one of the most popular and enduring attractions of the Disney parks—and a living legacy of Walt Disney’s ability to not only recognize creative geniuses, but to get them together to create something greater than the sum of its parts.

Since 1993, Ed Squair has worked for The Walt Disney Company in roles ranging from managing the Photo Library to writing about Disney history, and most recently, in social media strategy. The Haunted Mansion has always been a special interest of his, and the subject of several of his articles to date.