Evolution of a Duck

As part of our month-long salute to Donald Duck, we asked Disney historian, J.B. Kaufman, to share with us the history of Donald's early days.

Over the course of nearly eight decades, Donald Duck has become one of the most celebrated and fondly remembered of all Disney characters. What is sometimes not remembered is that Donald began life in 1934 as a very different duck. His physical appearance, in his earliest films, was one that many of today’s Disney fans would scarcely recognize.

This was not unusual; most of Hollywood’s classic cartoon characters have evolved slowly into their final form. Mickey Mouse, assuming his classic design within his first three films, was the exception to the rule.

Donald’s debut in The Wise Little Hen was built around his voice, supplied by the uniquely talented Clarence Nash. His appearance was simply that of a generic cartoon duck, with the long bill, extended neck, and waddling gait common to his species. As he returned to play additional supporting roles in 1934 and 1935, his appearance remained essentially the same.

In the spring and summer of 1936, in shorts like Orphans’ Picnic and Moving Day, audiences began to see changes in Donald’s design. His bill, still long and ducklike, became more malleable and expressive. His eyes grew larger, telegraphing his changes in expression. No longer a nondescript duck, he was becoming a distinct, unique individual. By this time Donald’s popularity with audiences was unmistakable, and the Disney studio was clearly grooming him for stardom.

Don Donald, the first picture in a Donald Duck starring series, was released in January 1937. By now Donald had settled into the familiar design still remembered today. During these golden years of Disney animation, many artists displayed uniquely specialized talents, and certain of the animators were found to have a special proficiency in animating Donald’s movements and moods. These artists formed a loose talent pool known as the “Duck men.”

Along with the changes in his appearance, and perhaps more important, came the development of Donald’s personality. In his first role in The Wise Little Hen, Donald had existed only to serve the needs of the story. His main characteristics in that film were his laziness, as he dodged the responsibility of helping the hen plant and harvest her corn, and a mischievous glee when he fooled her into thinking he was too sick to work. 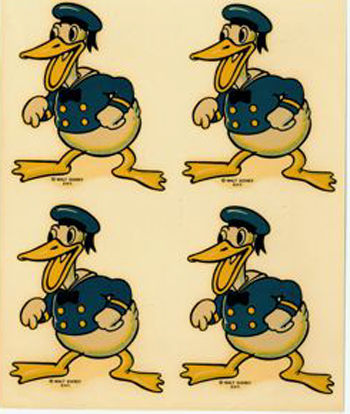 It was in his second appearance, in Orphans’ Benefit (1934), that Donald showed his true colors. In this short he attempted a stage performance for an audience of unruly youngsters, who heckled him mercilessly and threw objects at him. Donald lost his temper and exploded in a tantrum, and animator Dick Lundy devised a distinctive action to show off his fighting rage: hopping on one foot, brandishing his fist, challenging all comers.

It was a career-making scene. Donald Duck was a naturally funny character anyway, but when he became angry, he was hilarious. In subsequent films he retained his lazy and mischievous attributes, but his temper became his defining trait. Mickey Mouse, increasingly a nice guy in the mid-1930s, made a direct appeal to the audience’s sympathies, but Donald, of the thunderous rages, was clearly built for comedy. 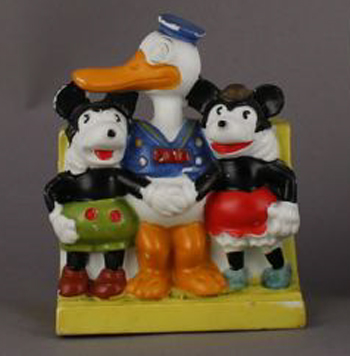 The story department obliged, unleashing a host of slapstick indignities on him. In the first three years of his screen life, Donald was chased by a runaway saw blade in The Dognapper, swept over a waterfall and brained with a tree branch in On Ice, trampled by stampeding horses in Mickey’s Polo Team, dive-bombed by a swarm of bees in Orphans’ Picnic, inflated like a balloon and sent careening through the air in Moving Day, fired from a cannon and electrocuted in Mickey’s Circus, and smashed through a window and dangled from a precarious height in Donald and Pluto. He took it all, and belligerently bounced back for more.

By the late 1930s, both Donald’s design and his personality had crystallized. The years 1937-1941 might be considered the peak of his acting career; they produced a series of delightful shorts which drove him, with exquisite artistry, to the breaking point time and again. When a 1938 audience saw a Donald Duck short with the title Self Control—and saw Donald, in its opening scene, happily relaxing in his hammock—they knew what to expect. The fun was in watching how his eponymous self-control would be shattered by film’s end; by what carefully crafted degrees the filmmakers would inflict life’s torments on him until, step by step, he lost his temper completely. And Donald never disappointed; his films invariably ended with a wild, sputtering paroxysm of rage.

Is it any wonder we still love the Duck? 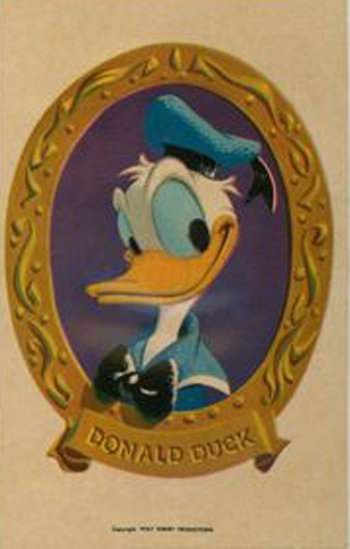