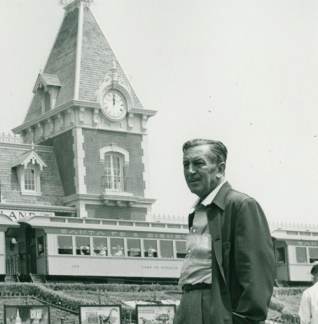 Many guests will no doubt journey to Walt Disney’s Original Magic Kingdom, Disneyland, after experiencing all of the new and exciting attractions and experiences at Disney California Adventure. We at the Walt Disney Family Museum would like to highlight some of the must see Disneyland attractions guests can still experience today that tie directly back to Walt Disney himself.

In celebration of summer, which officially starts today, we are please to present to you...

The Must See Attractions that made Walt Disney's Magic Kingdom
Internationally known as "The Happiest Place on Earth"!

The Disneyland Railroad may be Disneyland's greatest representation of Walt Disney at the park. Walt was a lifelong train enthusiast and some form of a train ride was included in the earliest conceptual drawings of Disneyland. Walt considered using his own 1/8th scale miniature backyard train, the “Lilly Belle”, as an attraction at the modest Mickey Mouse Park he originally planned to build adjacent to the Disney Studio in Burbank. As his plans for a theme park outgrew the Burbank plot, so did the scale of his railroad, 5/8ths scale to be exact. In designing his park, Walt said that he wanted Disneyland “to look like nothing else in the world. And it should be surrounded by a train.” The two opening day locomotives - the C.K. Holliday and E.P. Ripley- as well as the passenger cars were all built at the Disney Studio in 1954. Due to its popularity with guests a third locomotive, the Fred Gurley, was added to the Disneyland Railroad in 1958 and a fourth, the Ernest S. Marsh was added in 1959. 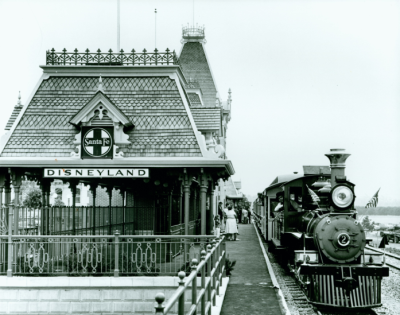 Guests taking a “Grand Circle Tour” of Disneyland today experience an overview of the many lands of Walt’s park. The grand finale of the tour is a visit through the Grand Canyon Diorama and a trip back in time through the Primeval World. The Grand Canyon Diorama, opened in 1958, represents the view from the canyon's southern rim and is painted on a 306 foot piece of seamless canvas. The diorama features taxidermy animals including mountain lions, bighorn sheep, wild turkeys, and a hard to spot armadillo. Primeval World, added in 1966, is home to the audio-animatronic dinosaurs from the Magic Skyway attraction Walt Disney designed for the Ford Pavilion at the 1964/65 New York World’s Fair.

A ride on the Disneyland Railroad is a great way to start or end a fun filled day at the park. Make sure to take some time to look at the historic displays, photos of Walt, and the replica of his backyard train, the “Lilly Belle”, located inside Main Street Station. The actual “Lilly Belle” is of course on display in Gallery 9 at the Walt Disney Family Museum.

For our next installment, we’ll continue our look at the quintessential “Walt” attractions at Disneyland by spending a few “Great Moments with Mr. Lincoln"! 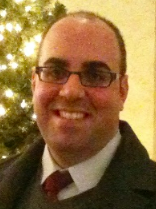 Joseph Titizian is an inaugural member of The Walt Disney Family Museum volunteer team. He is a regular contributor to this blog, and has developed continued education courses for the volunteer team. A lifelong Disney fan, Joseph has previously worked at Disneyland Park and Pixar Animation Studios.

Bon Voyage! screens daily throughout the month of June at 1:00pm and 4:00pm (except Tuesdays). Tickets are available at the Reception and Member Service Desk at the Museum, or online by clicking here.