This summer, one of Walt Disney’s most beloved Disneyland attractions celebrated its 50th Anniversary. On June 23rd, 2013, Jose, Michael, Pierre, and Fritz marked five decades of leading the chorus of singing birds, crooning flowers and talking tikis in Walt Disney’s Enchanted Tiki Room.  We at The Walt Disney Family Museum would like to highlight the history of this landmark Disneyland attraction whose technological legacy continues to influence the world of themed entertainment around the globe.

So with no further ado we present:

"Wahine e o keonimana. Ladies and gentlemen, a small reminder before entering the Tiki Room. We ask you to refrain from smoking inside, and please, do not carry any food or drink into the Tiki Room. And, oh yes, no flash bulbs, please! Our performers are temperamental and easily upset. Thank you for your cooperation. And now ladies and gentlemen, United Airlines invites you to come with us, to a world of joyous song and wondrous miracles - Walt Disney's Enchanted Tiki Room." (1963)

With those words, guests visiting Disneyland in the Summer of 1963 would enter an attraction like no other, an experience that could only have been created by Walt Disney and his legendary assemblage of magic making Imagineers. And now, fifty years later, guest continue to throng to Walt Disney’s Enchanted Tiki Room, whose staying power stands as a testament to the timeless wonder that was created when space-age technology was first paired with the Disney imagination.

It was all started by an antique mechanical bird…

It’s hard to believe that Disneyland’s own tropical hideaway began in an old New Orleans antique shop. Here, Walt Disney discovered an antique mechanical bird in a gilded cage and instantly became fascinated by this little bird that could turn its head, flap its wings and tail, and open its beak to whistle. Walt wondered if the simple mechanism in this old antique could make the bird sing, could he do it better? He challenged his Imagineers to design a way to make a mechanical bird’s beak move on cue to music or speech. The Imagineers took on Walt’s challenge and created a new form of three dimensional animation that Disney dubbed “Audio-Animatronics”. Walt was very excited to be using the latest technology to revolutionize yet another form of animation. “We are using the new type of valves and controls developed for rockets,” Walt said. “That way we can create extremely subtle motions”. He explained the technology behind the Enchanted Tiki Room, saying “Everything is preprogramed on tape: the bird’s movements, lighting effects, and sound. We turn on the tape and the birds do their stuff. At the end, the tape automatically rewinds itself and starts all over again.” The technological breakthroughs of the “The Enchanted Tiki Room” opened the door to immersive and engaging classic Disney attractions like “Great Moments with Mr. Lincoln,” “Carousel of Progress,” and “Pirates of the Caribbean” as the Imagineers used what they had learned creating the Tiki Room to build on their success. Walt humbly described his innovation as “just animation with sound, run by electronics. It’s an extension of animated drawings. We take an inanimate object and make it move.” The legacy of this technology continues to this day with advanced Audio-Animatronic figures like the autonomous “Lucky, the Dinosaur” and the life-size Cars that populate “Radiator Springs Racers”. 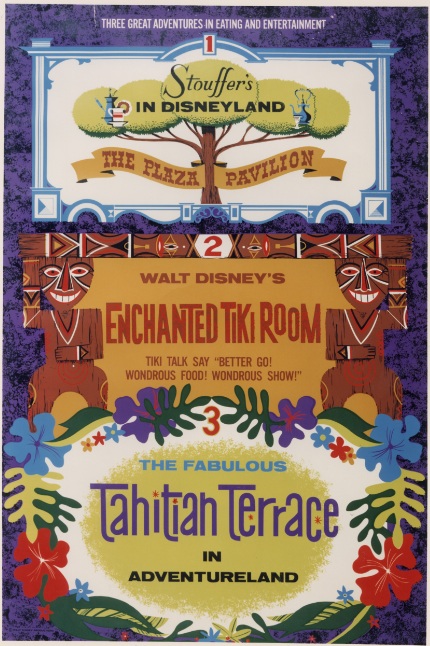 Let’s all Dine Where the Birdies Dine…?

Early plans called for the Enchanted Tiki Room to be a Polynesian restaurant featuring a show with Audio-Animatronic birds serenading guests at the end of their meal. The restaurant would have shared its kitchen with the Tahitian Terrace in Adventureland and the Plaza Pavilion restaurant around the corner on Main Street, U.S.A. since all three are actually a part of the same building. As the show developed, it became obvious that the dining concept would be impractical. Guests would be so enthralled by the birds singing overhead, that they would not finish their meals in time for the next group of diners to enter the restaurant, and soon the dining component of the Tiki Room concept was dropped. Elements of the restaurant design did survive, including the original restaurant chairs that were welded together into rows and used for the show’s seating for the attraction’s first 40 years. The Magic Fountain at the room's center was designed as the bussing station and still contains storage compartments for silverware and other items within the base of the fountain. Disney even created an attraction poster that stated “Tiki Talk Say Better Go, Wondrous Food, Wondrous Show!”. Also, the unique fact that the Enchanted Tiki Room is the only Disneyland attraction with its own restrooms gives a clue to its original dining concept.

Although difficult to conceive today, in 1963, Disneyland guests could not begin to fathom what exactly “Walt Disney’s Enchanted Tiki Room” was. Cast members would try to explain that there were singing birds and flowers inside the building, but confused guests would bypass the attraction. Another challenge was the fact that a ticket to experience the Enchanted Tiki Room was not included in the Disneyland Ticket Books. The show, being fully financed and owned by Walt Disney, required its own special ticket costing $0.75. Comparably, an E-Ticket for one of Disneyland’s signature attractions like the Matterhorn Bobsleds cost only $0.50. The solution to help explain and entice guests at the same time was found in the Barker Bird, an Audio-Animatronic macaw that was added to a perch above the Enchanted Tiki Room’s turnstiles. From high above, Barker Bird (voiced by Disney legend and Tiki Room script writer Wally Boag) would call to the guests below, describing the wonders to be found inside the Tiki Room. The solution worked, as guests received a sneak peak of the technological wonders they would experience during the show. Unfortunately the solution worked too well, as dazzled guest who stopped to marvel at this talking bird clogged up the already narrow entrance to Adventureland. Barker Bird was eventually retired, spending many years quietly on display in the lobby of the Disneyland Opera House. 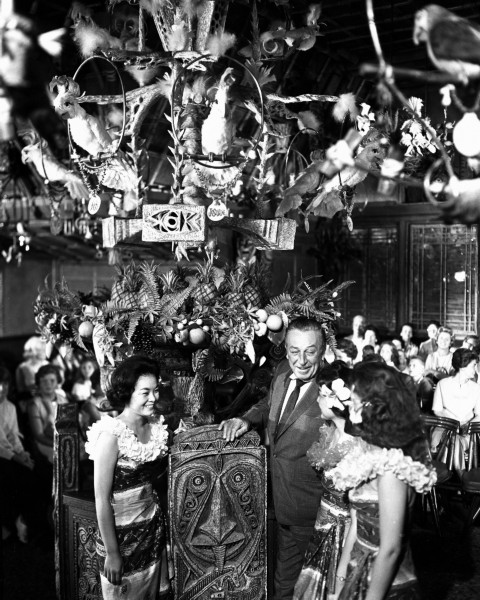 The Legends Behind the Feathers…

The team that brought Walt Disney’s Enchanted Tiki Room to life reads like a who’s who of Disney Legends. The show was written by Disneyland’s Clown Prince of Buffoonery, Wally Boag, who also voiced the lead macaw, Jose. The three other lead birds include "Michael" whose Irish brogue was voiced by the Golden Horseshoe’s Fulton Burley; "Pierre" whose Maurice Chivalier-esque French accent was voiced by Ernie Newton, and “Fritz" whose German accent was provided by Thurl Ravenscroft, who also voiced the tiki god Tangaroa in the Enchanted Tiki Garden at the attraction's entrance. The Soprano Orchid in the “Hawaiian War Chant” number was voiced by “The Lawrence Welk Show’s  own “Champagne Lady”, Norma Zimmer. In addition to top notch voice talent many other Disney Legends contributed to the creation of the Enchanted Tiki Room including the Sherman Brothers, who wrote the attraction’s theme song, “The Tiki, Tiki, Tiki, Tiki Room”. Imagineering legends John Hench, Marc Davis and Rolly Crump contributed to the overall concept, look, and humor of the show, while Harriet Burns, “The First Lady of Imagineering, along with Leota Toombs and Glendra Von Kessel, created and attached all of the plumage for the birds. Harriet recalled that the Imagineers were having difficulty coming up with a material for the bird’s chest that would realistically stretch and expand as they “breathed”.  Walt Disney would unknowingly provide the revelation for the solution. Harriet noticed in a planning meeting how the stretching and contracting movement of Walt’s favorite blue cashmere sweater over his elbow was exactly the movement the Imagineers were envisioning. Inspired by Walt’s sweater, Harriet created a custom woven fabric whose movement created the lifelike movements of the bird’s breathing chests. 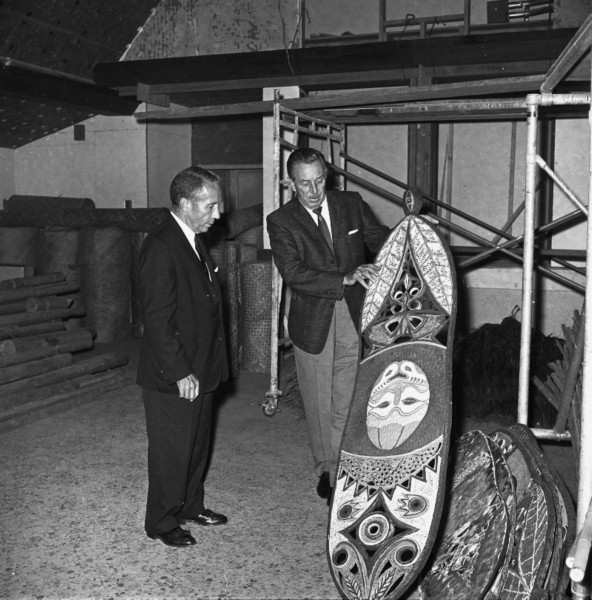 Walt Disney was an innovator who continually embraced and adapted new technologies to enhance and advance the art of storytelling. With the creation of the Enchanted Tiki Room, Walt once again furthered his innovations in the animation and themed environment fields by creating an immersive three dimensional animated experience. “Just as we had to learn to make our animated cartoons talk,” Walt explained, “we had to find a way to make these characters talk too. Now to accomplish this, we created a new type of animation, so new that we had to invent a new name for it: Audio-Animatronics. The same scientific equipment that guides rockets to the moon is used to make José and his little friends in the Tiki Room sing, talk, move and practically think for themselves!” Fifty years later, we celebrate this quintessential classic Disneyland attraction, not only for its beautiful Polynesian setting, it’s memorable music, or its now quaint and nostalgic charm, but also for the fact that this single attraction removed the two dimensional limits of the imagination and ushered in multiple new concepts in the field of Disney produced family entertainment.

Happy 50th Anniversary to the 225 birds, flowers, and tiki performers in Walt Disney’s Enchanted Tiki Room. Here’s to 50 more years of pleasure and glee… and not winding up on a ladies hat! 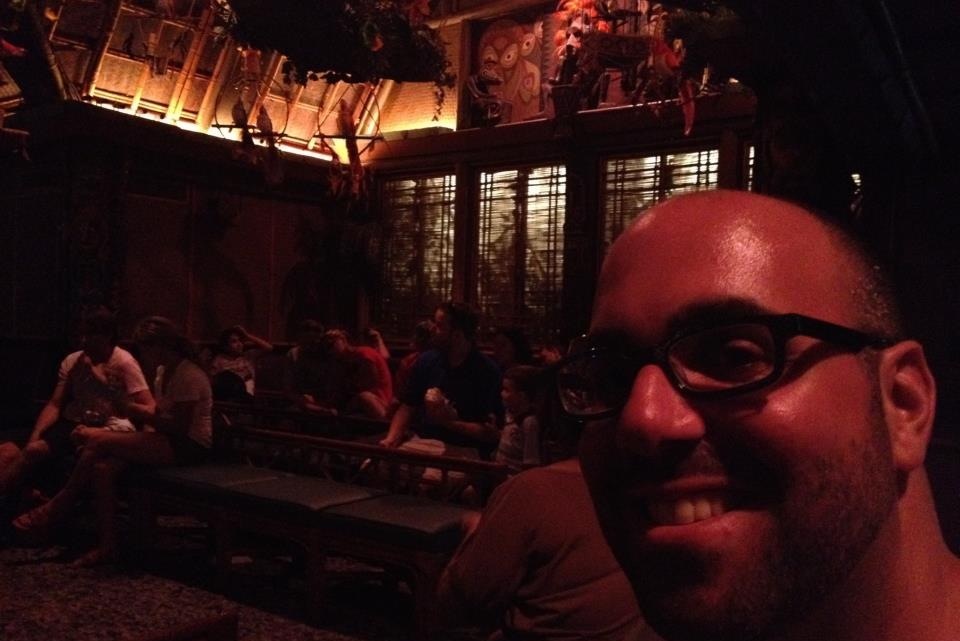 Joseph Titizian (pictured left in Walt Disney's Enchanted Tiki Room) is an inaugural member of The Walt Disney Family Museum volunteer team. He is a regular contributor to this blog, and has developed continued education courses for the volunteer team. A lifelong Disney fan, Joseph has previously worked at Disneyland Park and Pixar Animation Studios.