This month, The Walt Disney Family Museum celebrates Walt Disney’s brilliant and timeless 1942 animated feature, Bambi. In this column, Guest Blogger Jeff Pepper of 2719 Hyperion provides a fascinating examination of the literary source of the film. 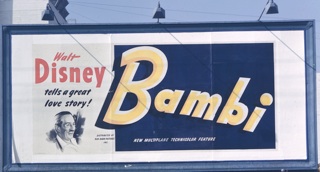 The death of Bambi's mother is considered to be one of the harsher moments in Disney cinema, yet it generally pales in comparison to some of the intense material found in the novel that inspired the Disney animated feature of Bambi. Make no mistake, Bambi: A Life in the Woods by Felix Salten is not about benign forest creatures and twitterpation; it is a starkly realistic interpretation of the natural world. Walt Disney chose to soften it into a more palatable and child-friendly walk in the wilderness.

Felix Salten was the pen name of Hungarian born author and journalist Siegmund Salzmann, who spent the vast majority of his life living and working in Vienna, Austria. Bambi: A Life in the Woods was first published in Austria in 1923. An English-translation was published in the United States by Simon and Schuster in 1928. MGM filmmaker Sidney Franklin acquired the movie rights to the novel in 1933. Ultimately concluding that the material would be too difficult to translate into a live-action film, Franklin sold the rights to Walt Disney in 1938. Bambi arrived in theaters during the summer of 1942. Disney would later adapt Salten's squirrel story Perri into a True-Life Fantasy in 1957, and draw inspiration from Salten's The Hound of Florence when creating the 1959 comedy The Shaggy Dog.

Prior to the release of the Disney film, Bambi: A Life in the Woods was always considered an adult novel. In the decades since, the Disney association has inspired publishers to reclassify the novel as children's literature, to the point where it is now considered by many to be a classic of the that particular genre. While the story is not necessarily inappropriate for all but the very youngest of readers, it is indeed a rather direct and at times brutally honest account of forest life. One such example is a passage where Bambi, while fleeing from hunters, encounters an injured hare:

Someone moved feebly in front of him. It was Friend Hare's wife who had called. "Can you help me a little?" she said. Bambi looked at her and shuddered. Her hind leg dangled lifelessly in the snow, dyeing it red and melting it with warm oozing blood. "Can you help me a little? she repeated. She spoke as if she was well and whole, almost as if she was happy. "I don't know what can have happened to me," she went on. "There's really no sense to it, but I just can't seem to walk…” In the middle of her words she rolled over on her side and died. Bambi was seized with horror again and ran.

Over the years, numerous critics and readers have associated many distinctly non-juvenile themes with the story. It was banned in Nazi Germany for being "political allegory." It is seen as an early example of environmental literature, advocating what many have interpreted as an anti-hunting bias. Undercurrents of religious thought and philosophy can also be found within the book's pages. Walt Disney effectively removed any kind of social commentary from his finished film, despite being accused of originating the "Bambi effect," that being the eliciting of an undeserved emotional objection to the death of a sympathetically-presented anthropomorphic creature. 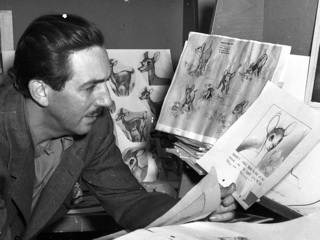 Walt took Salten's story and injected it with humor and levity while still maintaining the overall sense of peril and danger faced by the characters. He eliminated the explicit violence found in Salten's text, replacing it with more indirect and off-screen references. Perhaps the most dramatic departure from the novel involves the film's most famous sequence--the death of Bambi's mother. In the book, Salten devotes an entire chapter to a sequence in which a large hunting party enters the forest and terrorizes the inhabitants, describing in detail the deaths of numerous animals, including the aforementioned wife of Friend Hare. Amidst the turmoil, Bambi is separated from his mother. The chapter ends with the somewhat low-key pronouncement that "Bambi never saw his mother again." Walt jettisoned the large scale invasion and replaced it with the still very intense confrontation with just a single hunter.

Walt removed many of the novel's supporting characters, including Aunt Ena (Faline's mother) and Old Netta, an aging doe who helps Bambi survive after his mother's death. The most significant omission is that of Gobo, Bambi's cousin and Faline's twin brother. During the hunt where Bambi's mother is killed, an injured Gobo is taken by a hunter and eventually tamed. He later returns to the forest, fearless of Man, and is subsequently killed by another hunter. The character of Friend Hare eventually evolved into the movie's Thumper. Flower the skunk was created by Walt and his crew and had no literary counterpart.

Walt at times did consider some of the book's more philosophical underpinnings. One particular chapter from the book focused on two autumn leaves having a rather existential discussion about their own mortality before falling to the ground. Disney artists in fact storyboarded the sequence, but it was ultimately rejected as being too disparate from the primary storyline. The film also gives less focus to how humans are perceived by the forest creatures. Salten explores that dynamic more deeply, as witnessed by this passage that appears near the end of the story when Bambi and the old stag confront the dead body of a human:

"Do you see, Bambi?" the old stag went on, "do you see how he's lying there dead, like one of us? Listen, Bambi. He isn't all-powerful as they say. Everything that lives and grows doesn't come from Him. He isn't above us. He's just the same as we are. He has the same fears, the same needs, and suffers in the same way. He can be killed like us, and then he lies helpless on the ground like all the rest of us, as you see Him now."

Disney did provide a more cohesive narrative to the story, something that was lacking in the novel. The climactic forest fire sequence was wholly created for the movie and helped reinforce the film's more defined themes of life, death and rebirth. On a more minor and almost unnoticeable point, Walt relocated the story to North America from the European setting of the novel. Bambi was in turn transformed into a white tail deer from his book-based roe deer incarnation.

Bambi: A Life in the Woods was indeed a challenge to bring to the screen. In their book on the making of the film, Frank Thomas and Ollie Johnston noted that, "Walt was always ready to try something completely new if the idea intrigued him enough. Although he claimed that his main interest was in the animals' personalities, he found himself moved by many of the themes in the book, several of which would keep haunting him over the next few years. But at the time, while he thought he knew the special feeling he wanted in Bambi, he did not know how to achieve it, or even if it could be done."

Thankfully, Walt and his studio rose to that challenge. But in many ways the final product is an entirely different animal from the material upon which it was based.

Jeffrey Pepper is a journalist and historian who writes extensively about popular culture, and most especially about Walt Disney and the history of The Walt Disney Company. He is the author of the popular Disney-related website 2719 Hyperion.  He is also the author of Boom-Pop!, a website devoted to 20th century pop culture, and the creator, author and designer of Hawkins Strongbox, a faux-history website with a distinct steampunk flavor.

2719 Hyperion presents informative and enjoyable content relating to any and all types of Disney entertainment. 2719 Hyperion is dedicated to the memory of Walt Disney and explores and celebrates his legacy of creativity and innovation that very much originated within the walls of the Walt Disney Studios complex, once located at 2719 Hyperion Avenue near Hollywood, California.

Walt Disney's Bambi is screening every day in June from 1-4pm (except Tuesdays, and June 11 & 25) in the state-of-the-art digital theatre at The Walt Disney Family Museum. Tickets are available at the Reception and Member Service Desk at our museum, or online at www.waltdisney.org.